Confirming something that people like Deepak Chopra and Dr. Oz figured out years ago, researchers at Villanova University and the University of Oregon have shown that all you have to do to convince people is throw some fancy-sounding pseudoscientific jargon into your argument.

The specific area that Diego Fernandez-Duque, Jessica Evans, Colton Christian, and Sara D. Hodges researched was neurobabble, in particular the likelihood of increasing people's confidence in the correctness of an argument if some bogus brain-based explanation was included. Fernandez-Duque et al. write:

Does the presence of irrelevant neuroscience information make explanations of psychological phenomena more appealing?  Do fMRI pictures further increase that allure?  To help answer these questions, 385 college students in four experiments read brief descriptions of psychological phenomena, each one accompanied by an explanation of varying quality (good vs. circular) and followed by superfluous information of various types.  Ancillary measures assessed participants' analytical thinking, beliefs on dualism and free will, and admiration for different sciences.  In Experiment 1, superfluous neuroscience information increased the judged quality of the argument for both good and bad explanations, whereas accompanying fMRI pictures had no impact above and beyond the neuroscience text, suggesting a bias that is conceptual rather than pictorial.  Superfluous neuroscience information was more alluring than social science information (Experiment 2) and more alluring than information from prestigious “hard sciences” (Experiments 3 and 4).  Analytical thinking did not protect against the neuroscience bias, nor did a belief in dualism or free will.  We conclude that the “allure of neuroscience” bias is conceptual, specific to neuroscience, and not easily accounted for by the prestige of the discipline.

So this may explain why people so consistently fall for pseudoscience as long as it's couched in seemingly technical terminology.  For example, look at the following, an excerpt from an article in which Deepak Chopra is hawking his latest creation, a meditation-inducing device called "DreamWeaver":

About two years ago I got interested in the idea that you could feed light pulses through the brain with your eyes closed and sound and music at a certain frequency.  Your brain waves would dial into it and then you could dial the instrument down so that you would decrease the brain wave frequency from what it is normally in the waking state.  And then you could slowly dial down the brainwave frequency to what it would be in the dream state, which is called theta, and then you even dial further down into delta.

What the hell does "your brain waves would dial into it" mean?   And I would like to suggest to Fernandez-Duque et al. that their next experiment should have to do with people immediately believing claims if they involve the word "frequency." 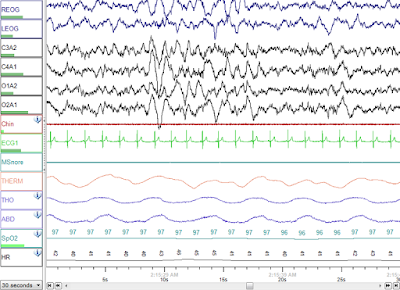 [Image licensed under the Creative Commons NascarEd, Sleep Stage N3, CC BY-SA 3.0]
Then we have the following twofer -- an excerpt of an article by Deepak Chopra that appeared on Dr. Oz's website:

Try to eat one of these three foods once a day to protect against Alzheimer’s and memory issues.

Wheat Germ - The embryo of a wheat plant, wheat germ is loaded with B-complex vitamins that can reduce levels of homocysteine, an amino acid linked to stroke, Alzheimer’s disease and dementia.  Sprinkle wheat germ on cereal and yogurt in the morning, or enjoy it on salads or popcorn with a little butter.
Black Currents [sic] - These dark berries are jam-packed with antioxidants that help nourish the brain cells surrounding the hippocampus.  The darker in color, the more antioxidants black currents [sic] contain.  These fruits are available fresh when in season, or can be purchased dried or frozen year-round.
Acorn Squash - This beautiful gold-colored veggie contains high amounts of folic acid, a B-vitamin that improves memory as well as the speed at which the brain processes information.

Whenever I read this sort of thing, I'm not inclined to believe it; I'm more inclined to scream, "Source?"  For example, I looked up the whole black currant claim, and the first few sources waxed rhapsodic about black currants' ability to enhance our brain function.  But then I noticed that said sources were all from the Black Currant Foundation (I didn't even know that existed, did you?) and the website blackcurrant.co.nz.  Scrolling down a bit, I found a post on WebMD that was considerably less enthusiastic, saying that it "may be useful in Alzheimer's" (with no mention of exactly how, nor any citations to support the claim) but that it also can lower blood pressure and slow down blood clotting.

So I suppose that the only way to protect yourself against this kind of nonsense is to learn some actual science, and be willing to read some peer-reviewed papers on the subject -- which includes training yourself to recognize which sources are peer-reviewed and which are not.

But doing all this research myself leaves me feeling like I need some breakfast.  Maybe a wheat germ, black currant, and acorn squash stir-fry.  Can't have too many antioxidants, you know, when your hippocampus is having some frequency problems.
**********************************
Author Mary Roach has a knack for picking intriguing topics.  She's written books on death (Stiff), the afterlife (Spook), sex (Bonk), and war (Grunt), each one brimming with well-researched facts, interviews with experts, and her signature sparkling humor.
In this week's Skeptophilia book-of-the-week, Packing for Mars: The Curious Science of Life in Space, Roach takes us away from the sleek, idealized world of Star Trek and Star Wars, and looks at what it would really be like to take a long voyage from our own planet.  Along the way she looks at the psychological effects of being in a small spacecraft with a few other people for months or years, not to mention such practical concerns as zero-g toilets, how to keep your muscles from atrophying, and whether it would actually be fun to engage in weightless sex.
Roach's books are all wonderful, and Packing for Mars is no exception.  If, like me, you've always had a secret desire to be an astronaut, this book will give you an idea of what you'd be in for on a long interplanetary voyage.
[Note: if you purchase this book using the image/link below, part of the proceeds goes to support Skeptophilia!]