I'm going to start out with a quote from the brilliant Randall Munroe, whose comic strip xkcd is rightly beloved by science nerds and tech geeks the world over.  (Go into any college science building, and check out the professors' office doors.  You'll find as many xkcd comic strips as you did ones from The Far Side twenty years ago.)

The quote is:  "Correlation does not imply causation, but it does waggle its eyebrows suggestively and gesture furtively while mouthing, 'Look over there!'"

The reason this comes up is because of a recent paper in Nature Scientific Reports called, "On the Correlation Between Solar Activity and Large Earthquakes Worldwide."  The authors, Vito Marchitelli and Paolo Harabaglia (of the Università della Basilicata of Potenza, Italy), and Claudia Troise and Giuseppe De Natale (of the Istituto Nazionale di Geofisica e Vulcanologia of Naples) investigated a claim that was first made over a century and a half ago; that there is a connection between solar activity and earthquake frequency.

The first scientist who noticed this was the Swiss astronomer Rudolf Wolf, who also noted the 11.1 year cyclicity of sunspot frequency.  Sunspots are basically solar storms, regions where there is such a high concentration of magnetic flux lines that it inhibits convection and generates a region that is a little cooler and darker than the surrounding parts.  (A sunspot's darkness is relative; isolated from the rest of the bright disk of the Sun, a sunspot would have about the same luminosity as the full Moon, and would glow bright orange.)

Sunspots are also connected to some of the most violent activity our Sun engages in; solar flares, prominences, coronal loops, and coronal mass ejections.  Each of these is basically a different kind of enormous explosion on the Sun's surface, and results in a huge increase in the subatomic particle flux surging outward into the Solar System.  Our atmosphere protects us from some of that bombardment, but it's detectable on the Earth's surface not only with sensitive instruments but because it triggers the brilliant and gorgeous auroras near the poles.

It's not without its hazards, however.  Large events such as coronal mass ejections can damage or disable satellites, and because of the charged nature of the particles, can induce electrical activity in wires and potentially knock out the terrestrial electrical grid. 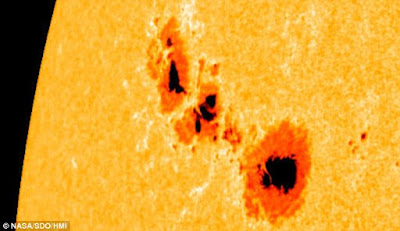 But Marchitelli et al. found -- or, rather, confirmed Wolf's claim -- that there is a correlation between sunspot activity and earthquake frequency.  So how the hell could that work?

First, let's rule out that it's some kind of spurious correlation, such as the wonderful discovery by Tyler Vigen that per capita cheese consumption year-by-year correlates almost perfectly with the number of people who died from becoming tangled in their bedsheets.  Of course, you can correlate almost anything with anything else if you cherry-pick your data carefully enough; and there are statistical methods to catch out that sort of thing.  Here, an application of those statistical methods to the sunspot/earthquake correlation led to a vanishingly small -- less than 0.00001 -- chance that what they were looking at was not meaningful.

So what's going on here?  Turns out the likeliest explanation has to do with the induction of electrical activity I referenced earlier.  And this is where I had to stifle a chuckle.

If you read my piece "Vanished into the Wilderness" only a couple of days ago, you may remember that one of the goofy explanations proffered for unexplained disappearances of hikers is "the piezoelectric properties of granite."  Piezoelectricity is the property of certain substances to develop a charge if they're put under pressure; it's been thoroughly studied and in fact has a multitude of uses in technology, including push-start ignition on propane grills, the timekeeping device inside a quartz watch, and amplification pickups in electric guitars.

The key to how this could trigger earthquakes has to do with the fact that the piezoelectric effect works both ways; pressing on a piezoelectric substance induces a charge, and charging it induces a change in shape (altering the pressure).  So what Marchitelli et al. suspect is going on here is that the dramatic increase in charged particle flux striking the Earth during a peak time of sunspot activity is creating a piezoelectric change in the pressure of the rocks the particles are passing through -- generating a tension that makes it more likely for a stressed fault to rupture.

What's fun about all this is that not only do we have a correlation, but we have a possible mechanism explaining it.  That's often the problem; there might be odd correlations out there, but absent a plausible mechanism, chances are we're looking at something like Tyler Vigen's discovery that the number of letters in the winning word of the Scripps National Spelling Bee correlates with the number of people worldwide who are killed yearly by venomous spiders.  Here, we are looking at a meaningful correlation.

It also shows that we're being affected by forces of which the average person is entirely unaware.  Which is kind of cool but kind of scary.  It makes me wonder what other things are happening out there that are exerting influences on the world around us in strange and subtle ways.

For what it's worth, I still think that astrology, with all its alleged correspondences between the positions of the planets and stars and people's personalities and fates, is bunk.  And even if piezoelectricity might explain the connection between sunspots and earthquakes, I maintain that it doesn't have a damn thing to do with hikers disappearing.