After dealing in recent posts with such topics as the catastrophic loss of Arctic sea ice, the role of isolation in depression, and various scientific advances from astrophysics, archaeology, and neuroscience, I'm sure what you're all thinking is, "Yes, but what about BunnyMan?"
BunnyMan is a cryptid I'd never heard of, that apparently haunts the town of Clifton, Virginia, in Fairfax County.  And according to an article over at Mysterious Universe, we're not talking some gentle, fuzzy little Peter Cottontail, here.  BunnyMan is more like the scary evil rabbit from Donnie Darko. 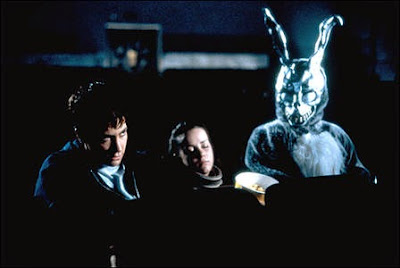 Author Brent Swancer, who is also the person who a while back warned us about giant Sky Jellyfish attacking Japan, tells us that sightings of BunnyMan have been going on for over a hundred years.  The whole thing started with the escape in 1904 of two inmates from an insane asylum, Douglas Grifon and Marcus Wallster, in the woods near Clifton.  Wallster was eventually found, hanging from a bridge railing, with a note saying, "You'll never catch me, no matter how hard you try.  Signed, The BunnyMan."  Grifon was never found.  And thus began a century's worth of mysterious deaths and sightings of guys in bunny suits.

You may be laughing by now.  I know I was.  Swancer, however, seems to be entirely serious, and describes numerous encounters with the long-eared lunatic.  And he tells us that this thing is the most foul-tempered rrrrrodent... -- well, let's hear an example or two in his own words:

Two of the most intriguing and bizarre accounts of the Bunny Man surfaced in 1970.  The first incident occurred on October 19, 1970, when an Air Force Academy cadet by the name of Bob Bennett was allegedly with his fiancée and parked his car on Guinea Road in Burke, Virginia, so that the couple could talk.  It was at this time that they noticed a white figure moving outside of the vehicle.  Moments later, the front window was smashed into a cascade of glass, and an ominous voice warned “You’re on private property and I have your tag number.”  The horrified couple sped away and as they screamed down the road they noticed a small hatchet on the floor of the car.  When questioned later by the police, Bennett would insist that the attacker had been decked out in a full bunny suit, and he told his superiors at the Air Force base the same thing.  As ridiculous as the story sounded, Bennett would continue to insist it was true long after the incident.

Just two weeks after the Bennett incident, the Bunny Man struck again.  Paul Phillips, a private security guard for a construction company, reported that he had seen a man-sized rabbit in front of a house under construction.  When approached by Phillips, the rabbit was reported to have said “All you people trespass around here.  If you don’t get out of here, I’m going to bust you on the head,” after which it started to furiously hack away at the unoccupied house with an axe.  Allegedly, when the startled Phillips went back to his car to get a firearm, the “bunny” swiftly escaped into the woods and disappeared.

I've been at this blog for ten years, and by this time, I thought I'd run into every cryptid in the book; but I have to admit, before yesterday I'd never heard of this guy.  So thanks to Brent Swancer for another example of hard-hitting journalism, uncovering the depredations of a vicious rabbit only a stone's throw from our nation's capital.  I feel safer now.  As Elmer Fudd teaches us, forewarned is forearmed. 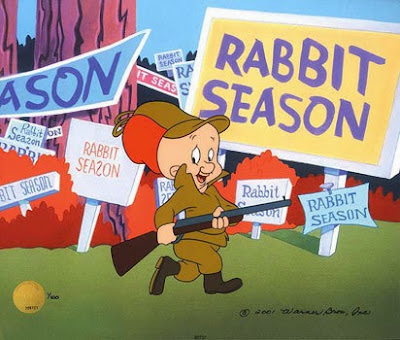 Who, or what, is the Bunny Man?  Is this a case of a ghost, an unsolved crime, a psycho on the loose, some mystery animal, or merely the delusional human psyche working upon its inner fears to create a phantom construct in the real world in the form of scary stories and myth?  The story of a man-sized bunny running around terrorizing, even murdering, people seems to cross over the line from mystery into preposterousness, but many urban legends doubtlessly have their origins in some grain of truth, so who really knows?  For the case of the Bunny Man, no matter how ludicrous it may sound, it might be a good idea to stay away from the Colchester Overpass at night, just in case.

So that's our hare-raising tale for today.  If you're ever down in Fairfax County, keep your eyes open, especially at night.  You might want to bring some carrots along as a peace offering.  I hear BunnyMan has quite a temper.
**********************************
Author Mary Roach has a knack for picking intriguing topics.  She's written books on death (Stiff), the afterlife (Spook), sex (Bonk), and war (Grunt), each one brimming with well-researched facts, interviews with experts, and her signature sparkling humor.
In this week's Skeptophilia book-of-the-week, Packing for Mars: The Curious Science of Life in Space, Roach takes us away from the sleek, idealized world of Star Trek and Star Wars, and looks at what it would really be like to take a long voyage from our own planet.  Along the way she looks at the psychological effects of being in a small spacecraft with a few other people for months or years, not to mention such practical concerns as zero-g toilets, how to keep your muscles from atrophying, and whether it would actually be fun to engage in weightless sex.
Roach's books are all wonderful, and Packing for Mars is no exception.  If, like me, you've always had a secret desire to be an astronaut, this book will give you an idea of what you'd be in for on a long interplanetary voyage.
[Note: if you purchase this book using the image/link below, part of the proceeds goes to support Skeptophilia!]