For a variety of reasons I've decided to go back to work part time.

Retirement is great, but because the universe has a perverse sense of humor, we found out the week after I retired that our house needed forty thousand dollars of foundation work in order to stop it from sliding down the hill into our creek.  The project involved putting piers under the foundation, meaning holes had to be drilled through and around the foundation down to the bedrock.  The good news, if there's any good news in a scenario like this one, is that we caught it before any serious structural damage was done to the house.

Not that you'd be able to tell from what the interior of the formerly-finished basement looked like once they were done.  The foundation work required stripping the whole thing down to the joists, studs, and cement floor, removing all the pre-existing carpet, tile, walls, and ceilings.  All of which now has to be re-installed. 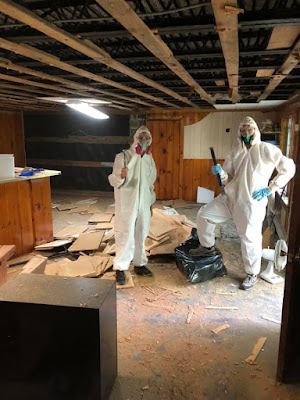 L to R: Me and my son, mid-demolition.  You can probably see the family resemblance between us.

So needless to say, we ended up with a hefty home improvement loan to pay off.  This was for me the main impetus to getting another job.  So this week I started work helping out seniors with yard work and house work, and providing companion care for people who aren't able to get out much.

I've always been inordinately worried about money.  During the time I was a single dad, I was literally down to nickels at the end of every pay period, and constantly looking for ways to economize.  Putting aside extra against eventualities like unexpected car repairs was pretty much impossible.  I've had a "poverty mentality" ever since, and even though now we're doing okay financially, I still have the constant expectation that the bottom is going to drop out.

It's all part and parcel of how my depression and anxiety seem to operate.  Reality checks (like looking at our bank statement and seeing that we do, in fact, have enough to pay our mortgage this month) don't make a dent in the panicked emotional state I seem to live in most of the time.  The way I've described it is that it's like I have two brains, an emotional one and a rational one, and they are not on speaking terms with each other.

Turns out this is a remarkably accurate description of what's going on.  A study published this week in The Journal of Neuroscience by Mary Kate P. Joyce, Miguel Ángel García-Cabezas, Yohan J. John, and Helen Barbas of Boston University, entitled "Serial Prefrontal Pathways Are Positioned to Balance Cognition and Emotion in Primates," we find out that there is a part of the brain called "Area 32" (not to be confused with Area 51) which links two other reasons, the dorsolateral prefrontal cortex (DLPFC) and the subgenual cortex.  The subgenual cortex is connected with emotional expression; the DLPFC is essentially like a thermostat, speaking through Area 32 to the subgenual cortex and allowing emotional equilibrium.

A neurological analog to the "reality check" I mentioned earlier.

But when the DLPFC is quiet for some reason, no longer relaying inhibitory signals through Area 32, the subgenual cortex kind of stages a coup, leading to a runaway emotional reaction.

Identifying the regions of the brain involved in certain abnormal responses is the first step toward targeted therapy.  I can speak from experience that this is really needed in the case of depression.  I've been through the wringer trying to find an antidepressant that works and doesn't give me horrible side effects -- it took three years to finally get one that seems to blunt the edge of the worst of it.  The strangest part of all this is how unpredictable it is; one person can have excellent results from an antidepressant that is either useless or actually detrimental for someone else, and honestly, no one knows why this is.

Research like this provides some hope that we may be narrowing in on what's going on.  Which is incredible news to people like me who've suffered from depression and anxiety for decades.

But now I need to get this posted and get going.  I've got to get out to my client's garden and finish cutting back her perennials.  All in a day's work.