California and Oregon are, literally, burning up.  A couple of days ago, there were five named tropical cyclones in the Atlantic and Gulf of Mexico simultaneously, something that's only happened one other time since records have been kept.  One of those cyclones is, as I write this, in the process of pummeling coastal Alabama and the panhandle of Florida, and the city of Pensacola is mostly underwater.

And still our "leaders" are claiming climate change doesn't exist.

The issue is settled, folks.  It has been for some time.  There is not a reputable climate scientist out there who denies the reality of anthropogenic global warming.  I know you can't link single events to a climate shift -- saying, for example, that a particular wildfire was directly caused by climate change -- but the overall pattern is absolutely unequivocal.  To deny it is an indicator either of being beholden to the corporate interests who would very much like climate change not to exist, or else abject and inexcusable ignorance.

Donald Trump, for example.  The man was an amoral, sociopathic narcissist to begin with, and now is illustrating on nearly a daily basis that he is also a catastrophic clod.  Take the briefing he participated in with California Governor Gavin Newsom a couple of days ago, in which the following exchange took place:

Wade Crowfoot, the California Secretary for Natural Resources:  We've had temperatures explode this summer...  We want to work with you to really recognize the changing climate and what it means to our forests and actually work together with that science.  That science is going to be key because if we ignore that science and sort of put our head in the sand and think it's all about vegetation management, we're not going to succeed in protecting Californians.

Trump:  It'll start getting cooler.  You just — you just watch.

Crowfoot:  I wish science agreed with you.

Right.  Same as his statement a few months ago that COVID-19 was going to "disappear, just like a miracle, you'll see."
The fact that Trump has a single supporter left brings home the accuracy of Isaac Asimov's famous essay "The Cult of Ignorance," written all the way back in 1980, in which he said:

There is a cult of ignorance in the United States, and there has always been.  The strain of anti-intellectualism has been a constant thread winding its way through our political and cultural life, nurtured by the false notion that democracy means that "my ignorance is just as good as your knowledge."

Trump may be the best illustration of that poisonous belief that the world has ever produced.

There's malice underlying his ignorance, though.  Trump not only is colossally stupid, he goes out of his way to surround himself with people who either share his views or, at the very least, don't dare challenge him.  Witness the fact that just two days ago, he appointed a well-known climate science denier, David Legates, to run the National Oceanic and Atmospheric Administration -- which oversees funding for climate monitoring and climate research.

All of this is hardly a surprise.  It's just more manifestation of a long-established pattern of science denial by our government.  Nevertheless, if you for some reason needed yet another reason to accept that climate change is occurring as we speak, consider the study that appeared in Nature last week, by Laura Landrum and Marika Holland of the National Center for Atmospheric Research.  In a paper that has the grim title, "Extremes Become Routine in an Emerging New Arctic," Landrum and Holland describe a fundamental shift in the entire climate of the Arctic, where open water and rain is now more common than sea ice and snow. 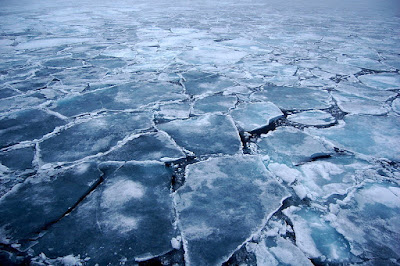 Writing about the research for the New York Times, journalist Henry Fountain paints a devastating picture of the speed of the change:

Using years of observational data from the region and computer models, the researchers found that sea ice is already in a new climate, in effect: The extent of ice in recent years is consistently less than what would be expected in even the worst year for ice in the mid-20th century.

Arctic sea ice has declined by about 12 percent per decade since satellite measurements began in the late 1970s, and the 13 lowest sea-ice years have all occurred since 2007.  This year is expected to be a record or near-record low for ice extent, which will be determined by the end of this month as the summer melt period ends.

I had to read that twice to realize that actually, even Fountain is soft-pedaling it.  The "thirteen sea-ice years since 2007" are every year since 2007.  The first sentence of the second paragraph should end with, "... and each of the last thirteen years has had lower sea ice than any other on record."

That is climate change.  Unmistakable unless you're either mind-blowingly ignorant or else in the pocket of corporate interests.

Or, like in the case of Donald Trump, both.

The time for argument over whether climate change is happening is over.  It has been for some time.  My fear is that the window of opportunity for doing something about it might be closing as well.  I'm not giving up yet, though.  Too much is at stake, like the long-term habitability of the Earth.  Time we elected some leaders who not only care about this, but understand and respect science rather than sneering and scoffing at it.