Most scientifically-literate types know about the impossibility of reaching the temperature of -273.15 C, better known as "absolute zero."  The way most of us would explain why it's impossible goes back to one formulation of the Second Law of Thermodynamics.  Since the Second Law says that heat always flows from a hotter object to a colder one unless you put energy into the system (I always called this "the Refrigerator Principle" in my biology classes), once you get near absolute zero it takes exponentially more energy to remove that last bit of heat from the object you're cooling, and to go all the way to zero would require (1) an infinite amount of energy expended to accomplish it, and (2) an infinite heat sink in which to place the extracted energy.  (Despite having been conjectured for over a century, this way of looking at absolute zero was proven beyond question by the mathematics of known physical laws just three years ago.) 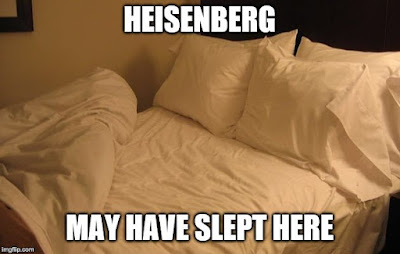 What the Uncertainty Principle does tell us is, despite its name, extremely specific.  What it says is for a particle, there are pairs of physical quantities called complementary variables, and for such a pair (call 'em A and B), the more we know about variable A, the less we can even theoretically know about variable B.  The most commonly cited pair of complementary variables is position and momentum/velocity.  If we know exactly where a particle is, we have no accessible information about its velocity, and vice versa.

Note that the Uncertainty Principle is not about the inaccuracy of our measuring techniques.  It's not that the particle has a specific position and velocity and we just don't know what they are, the same as watching a car speed by and thinking, "Okay, it was going so fast, at any given point along the road I don't know exactly how quickly it was moving."  This is a fundamental, built-in feature of the universe.  If I know a particle's position to a high degree of certainty, its velocity is equally uncertain, and in fact the particle exists in a superposition of all possible velocities simultaneously.  The reality is inherently blurry, and the more you home in on one piece of it, the blurrier the rest of it gets.

About as huge a violation of the Uncertainty Principle as you can get.

The reason all this comes up is because of a study at the University of Vienna that was the subject of a paper last week in Science in which we read about a 150-nanometer bit of silica (made up of around a hundred million atoms) that was cooled down to twelve millionths of a degree above absolute zero.  This turns out to be the true temperature limit for a particle that size; every atom in the particle was in the ground state, the lowest allowable energy a particle can have without violating Heisenberg's law.  The particle was suspended in an "optical trap" -- the easiest way to describe it is they levitated it with lasers -- and then allowed to free-fall so they could observe its behavior.

What the researchers hope to do is to use such experiments to shed some light on the behavior of gravity in the quantum world, something that has been a dream of physicists for a very long time.  While the other three fundamental forces of nature (electromagnetism and the weak and strong nuclear forces) have all been shown to be manifestations of a single "electronuclear" force, gravitation has resisted all attempts to incorporate it into a "Grand Unified Theory" that could simultaneously explain the gravitational warping of space and the strange behavior of the quantum world.  None of the candidates for a Grand Unified Theory (the most famous contender is string theory) have as yet panned out, but the search continues -- and the ability to cool particles described in last week's paper give a bit of hope that physicists will be able to isolate and study systems under conditions that make the mathematics tractable.

So that's our quantum weirdness for today.  Thanks to the friend and long-term loyal reader of Skeptophilia who sent me the link to the study.  I would never claim to say I understand it at any kind of deep level -- after all, no less a luminary than Richard Feynman famously said, "If you think you understand quantum mechanics, you don't understand quantum mechanics."  The fundamental workings of the universe are counterintuitive and mind-blowingly odd, and that's kind of where we have to leave it.

**********************************
Author Mary Roach has a knack for picking intriguing topics.  She's written books on death (Stiff), the afterlife (Spook), sex (Bonk), and war (Grunt), each one brimming with well-researched facts, interviews with experts, and her signature sparkling humor.
In this week's Skeptophilia book-of-the-week, Packing for Mars: The Curious Science of Life in Space, Roach takes us away from the sleek, idealized world of Star Trek and Star Wars, and looks at what it would really be like to take a long voyage from our own planet.  Along the way she looks at the psychological effects of being in a small spacecraft with a few other people for months or years, not to mention such practical concerns as zero-g toilets, how to keep your muscles from atrophying, and whether it would actually be fun to engage in weightless sex.
Roach's books are all wonderful, and Packing for Mars is no exception.  If, like me, you've always had a secret desire to be an astronaut, this book will give you an idea of what you'd be in for on a long interplanetary voyage.
[Note: if you purchase this book using the image/link below, part of the proceeds goes to support Skeptophilia!]