Voices from the past

Sometimes I'll bump into a story that is so down my alley that I'm surprised I didn't find out about it earlier.  That was my reaction to the link sent to me by a friend and long-time loyal reader of Skeptophilia, about a discovery back in 2017 of some samples of two languages that were up till then almost completely unknown.

The discovery was made because of palimpsests, which are documents that have been erased and written over.  This happened because the writing surfaces available -- mostly parchment made from lambskin -- were often considered more valuable than the text written on them, so when it was in short supply people would erase what was there (often it was sanded off with a stone) and rewrite over the new surface.  Some parchments were reused multiple times this way.

The erasing process, though -- just like using an eraser on a piece of paper today -- was never perfect, and traces of the original document(s) were left behind.  Which is why some researchers studying parchments at one of the oldest continuously-run libraries in the world, Saint Catherine's Monastery in Sinai, Egypt, were able to detect passages from two languages for which there were almost no samples left, Caucasian Albanian and Christian Palestinian Aramaic. 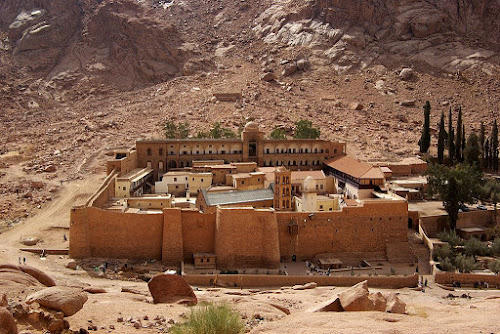 Saint Catherine's Monastery [Image licensed under the Creative Commons Berthold Werner / Wikimedia Commons / CC BY-SA.]
The palimpsests were read by photographing them repeatedly in different frequencies of light (including ultraviolet and infrared) and turning a computer loose on the composite images to see what was there that might not be visible to the naked eye.  The results were stunning -- new text from one hundred and thirty different palimpsests that has drastically increased our knowledge of the two extinct languages.

Caucasian Albanian (the language, and place, are unrelated to the present country of Albania), in the Lezgic family of languages -- its closest currently-spoken relative is Udi, spoken by about four thousand people in Azerbaijan and the Caucasian region of Russia.  Caucasian Albanian seems to have vanished from the region some time around 1000 C.E., and until now was only known from a handful of inscriptions on stone tablets.  Linguist Josh Gippert, who is an expert in this language family, is unequivocal about the find.  "This one discovery has brought about a twenty-five percent increase in the readability of Caucasian Albanian," Gippert said.

Christian Palestinian Aramaic is a dialect of Aramaic spoken between the fifth and thirteenth centuries C.E. by the Melkites, a Christian group in Syria.  Over the years, the speaking of Christian Palestinian Aramaic dwindled, replaced by Arabic, and seems to have vanished completely some time in the Middle Ages.  "This was an entire community of people who had a literature, art, and spirituality," said Michael Phelps, director of the Early Manuscripts Electronic Library, who oversaw the project. "Almost all of that has been lost, yet their cultural DNA exists in our culture today.  These palimpsest texts are giving them a voice again and letting us learn about how they contributed to who we are today."

The whole thing is pretty stupendous, not only for the ingenuity of the discovery but because it gives us at least a little bit more information about languages that haven't been spoken for eight hundred years or more.  We're seeing language extinctions today at an increasing rate, as the world's dominant languages (primarily Mandarin, English, Russian, Spanish, and Arabic) replace small/isolated languages.  There are hundreds of languages for which there are only a handful of remaining native speakers -- primarily older people -- which will be extinct without intervention (and possibly even with intervention) in the next twenty years.  Indigenous languages in Australia and South America are especially at risk.  There are places where indigenous people in two villages ten miles apart speak mutually unintelligible languages, and the natives there have mostly adopted the lingua franca (English and Spanish, respectively) in order to be able to travel and communicate.

You can understand why they do it, but it's still kind of sad, considering the cultural knowledge that is vanishing before our eyes.

In any case, the discovery in Egypt is a happy note, giving us a window into the speech of people from over a thousand years ago.  It's nice to know that we can still hear the voices of people who were thought to be silenced forever.