When you start looking into black holes, there's a lot to be fascinated by.
As you probably know, a black hole is one type of collapsed star.  The ultimate fate of a star depends on its initial mass.  When the collapse begins at the end of a star's life, it continues until it meets a force strong enough to counteract the gravitational pull of its mass.  In low-mass stars like the Sun, that oppositional force is the mutual repulsion of the negatively-charged electrons in its constituent atoms.  This leaves a dense, white-hot blob called a white dwarf, slowly radiating its heat away and cooling.  More massive stars -- between ten and twenty-five solar masses -- have such a high gravitational pull that once they start collapsing the electrostatic repulsion is insufficient to stop it.  The electrons are forced into the nuclei, resulting in a neutron star, a stellar core so dense that a matchbox-sized chunk of its matter would weigh three billion tons.
Above twenty-five solar masses, however, even the neutron degeneracy pressure isn't enough to halt the collapse.  Supergiant stars continue to collapse, warping space into a closed form that even light can't escape.
This is the origin of a black hole. 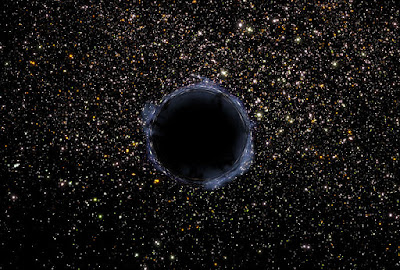 [Image is in the Public Domain courtesy of NASA/JPL]
Black holes are seriously odd beasts.  Let's start with what we can infer from the upshot of Einstein's General Theory of Relativity, that gravitational fields and accelerated frames of reference are indistinguishable.  (To clarify with an easy example; if you were in a box with no windows, and were being accelerated at a rate of 9.8 m/s^2, you would have no way of knowing you weren't simply in Earth's gravitational field.)  So as weird as it sounds, the same relativistic weirdness would occur in a powerful gravitational field as occurs when you move at a high velocity; time would slow down, mass increase, and so on.  You might recall this from the movie Interstellar.  The crew of a spaceship stranded on a planet orbiting a black hole experiences time dilation -- while a year passes for them, a hundred years passes for people out in the more ordinary reaches of the universe.
This is only the start of the weirdness, though.  You may have heard about spaghettification -- yes, that's really what it's called -- when an object falls into a black hole.  Usually the example given is an astronaut, but that kind of seems cruel; spaghettification would be as unpleasant as it sounds.  What happens is that the falling object would be ripped apart by tidal forces.  A tidal force occurs when one part of an object experiences a different gravitational pull than another part of the same object, and the result is that the object is stretched.
There actually is a tidal force on your own body right now; assuming you're not doing a headstand, your feet are closer to the Earth's center of mass, so they're being pulled a little harder than your head is.  The difference is so small that we're unaware of it.  But with an object near a black hole, the gradient of gravitational pull is so large that when the object gets close -- how close depends on the black hole's mass -- the tidal forces rip it apart, stretching it in a thin filament of matter (thus the "spaghetti" in "spaghettification").
The reason all this comes up is a paper published this week in Monthly Notices of the Royal Astronomical Society that contains observational data of a star getting sucked into a black hole and spaghettified.  "When an unlucky star wanders too close to a supermassive black hole in the centre of a galaxy, the extreme gravitational pull of the black hole shreds the star into thin streams of material," said study co-author Thomas Wevers, a European Southern Observatory Fellow in Santiago, Chile, in an interview with Science Daily.  "As some of the thin strands of stellar material fall into the black hole during this spaghettification process, a bright flare of energy is released, which we can detect."
That's not the only reason that black holes were in the news last week.  In a paper in Nature Communications Physics, scientists describe their observations of a rare event -- the merger of two black holes.  When this happens, the coalescence causes such a powerful shift in the warped gravitational field surrounding it that it sends ripples out through the fabric of space.  These gravitational waves travel outward from their source at the speed of light, and the ones from something as cataclysmic as a black hole merger are so powerful they can be detected here on Earth, thousands of light years away.
"The pitch and amplitude of the signal increases as the two black holes orbit around their mutual center of mass, faster and faster as they approach each other," said Juan Calderón Bustillo, of the University of Hong Kong.  "After the collision, the final remnant black hole emits a signal with a constant pitch and decaying amplitude -- like the sound of a bell being struck."
So that's our excursion into the bizarre and counterintuitive world of collapsed stars.  The whole thing makes me realize what a violent and hostile place much of the universe is, and glad we're relatively safe down here on our comfortable little planet orbiting an ordinary star in the outer spiral arms of an ordinary galaxy.
Boring as it can seem sometimes, it beats being spaghettified by a significant margin.
***************************************
This week's Skeptophilia book recommendation is brand new, and is as elegiac as it is inspiring -- David Attenborough's A Life on Our Planet: My Witness Statement and a Vision for the Future.
Attenborough is a familiar name, face, and (especially) voice to those of us who love nature documentaries.  Through series such as Our Planet, Life on Earth, and Planet Earth, he has brought into our homes the beauty of nature -- and its desperate fragility.
At 93, Attenborough's A Life on Our Planet is a fitting coda to his lifelong quest to spark wonder in our minds at the beauty that surrounds us, but at the same time wake us up to the perils of what we're doing to it.  His message isn't all doom and gloom; despite it all, he remains hopeful, and firm in his conviction that we can reverse our course and save what's left of the biodiversity of the Earth.  It's a poignant and evocative work -- something everyone who has been inspired by Attenborough for decades should put on their reading list.
[Note: if you purchase this book using the image/link below, part of the proceeds goes to support Skeptophilia!]