Because my other option is to go on a crazed rant about how my country is being run by an amoral sociopath, and about how even given that fact thirty-some-odd percent of Americans still support him and/or idolize him, I decided to look instead at a more cheerful topic: the remains of a young man who got fried by Mount Vesuvius on August 24, 79 C.E.

That eruption gives new meaning to the word "colossal."  It was what geologists call a Plinian eruption -- named, in fact, for author and philosopher Pliny the Elder, who was also killed that day -- one that instead of producing the fountains of lava you see from volcanoes like Kilauea, produces pyroclastic surges composed of ash and superheated air that can reach speeds of one hundred meters per second and temperatures over a thousand degrees Celsius.

In other words, once you see it coming, it's too late to do much besides sticking your head between your legs and kissing your ass goodbye.

(If you want to watch a fantastic -- if terrifying -- ten-minute simulation of what Vesuvius would have looked like from Pompeii on the fateful day, check this out.)

In any case, the eruption in 79 C. E. killed at least twenty thousand people -- probably more -- and released an unimaginable amount of energy in a very short time, estimated to be one hundred thousand times more than the atomic bomb that destroyed Hiroshima.  The city of Pompeii was basically flattened where it stood, and its inhabitants flash-cooked and then encased in ash, which is why researchers have found molds and casts of human bodies (and one dog), still in the positions they were in when they died.

This discovery, though -- the news of which I once again owe my pal Andrew Butters, author and blogger over at Potato Chip Math -- is unique, and is as fascinating as it is gruesome.  A team at University of Naples Federico II discovered the remains of a twenty-five-year-old man in a temple in Herculaneum dedicated to the Emperor Augustus.  He was face down, still lying where he fell.  But when the researchers took a look inside his skull, they got a surprise.

His brain had turned to glass, so quickly that his individual neurons are still visible.  Pier Paolo Petrone, who led the research, said in an interview with CNN, "The brain exposed to the hot volcanic ash must first have liquefied and then immediately turned into a glassy material by the rapid cooling of the volcanic ash deposit."

Here's how the team explains what happened, in their paper, that appeared last week in the journal PLoS-One:

In AD 79 the town of Herculaneum was suddenly hit and overwhelmed by volcanic ash-avalanches that killed all its remaining residents, as also occurred in Pompeii and other settlements as far as 20 kilometers from Vesuvius.  New investigations on the victims' skeletons unearthed from the ash deposit filling 12 waterfront chambers have now revealed widespread preservation of atypical red and black mineral residues encrusting the bones, which also impregnate the ash filling the intracranial cavity and the ash-bed encasing the skeletons.  Here we show the unique detection of large amounts of iron and iron oxides from such residues, as revealed by inductively coupled plasma mass spectrometry and Raman microspectroscopy, thought to be the final products of heme iron upon thermal decomposition.  The extraordinarily rare preservation of significant putative evidence of hemoprotein thermal degradation from the eruption victims strongly suggests the rapid vaporization of body fluids and soft tissues of people at death due to exposure to extreme heat.

Without further ado, here's a microphotograph of the neurons they found: 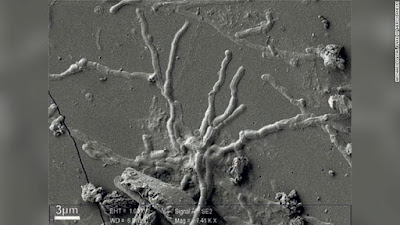 Vesuvius remains one of the most dangerous volcanoes in the world, and will have another large eruption at some point -- not if, but when.  And this time, it isn't a couple of towns with twenty thousand folks in the bullseye; right downslope from Vesuvius is the city of Naples, which has just shy of a million inhabitants.

The good news in all this is that volcanologists have gotten much better at detecting the danger signals prior to an eruption -- much better than, for example, the seismologists have of predicting when an earthquake might occur.  But as humans have shown time and time again, we really suck at taking the advice of scientists, preferring instead the reassurances of people who honestly don't know what they're talking about, and the time-honored maxim of "everything will be fine, just like it always is."

Which brings us full circle to Donald Trump and his brazen, idiotic, selfish *Gordon lapses into mumbled obscenities* comment not to be "afraid of COVID" or "let it dominate your life."  Despite the fact that worldwide, a million people have died (i.e. the population of Naples), and twenty percent of those have been in the United States.

Okay, I feel a rant coming on again, so I better stop here.