Because I'm tired of doomscrolling on Twitter and getting more and more discouraged about what's going on in the United States right now, today we're going to focus on: cool zoological discoveries.
In the last few weeks, there have been three papers that look at some amazing research on various animal species.  Let's start with the one in the Zoological Journal of the Linnean Society that described two new species of the rodent group with the amusing name "stilt mice" -- African mice with extra-long feet they stand upright on (a little like kangaroos).  If this isn't weird enough, they are also aquatic.
It's been a difficult group to study.  One of the stilt mice was known from a single specimen collected in Ethiopia 93 years ago, and had not been seen since.  This new study didn't find any more of that species -- scientists surmise that it was already on the brink of extinction when the specimen was collected -- but found what are probably its closest cousins.
"It's underappreciated how little is known about the biodiversity of small mammals, especially in tropical parts of the world," said Tom Giarla, professor of biology at Siena College in New York and lead author of the study.  "We're not discovering a whole lot of new lions, tigers, and bears, but there's an incredible potential for discovery of new species of small mammals because they're tough to find.  And they're sort of underappreciated animals -- they're really cool when you start to learn about their ecology.  These are semi-aquatic mice, so they're not just your average, everyday rodents." 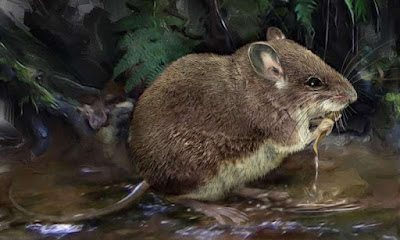 [Image courtesy of Velizar Simeonovski, Field Museum]
Study co-author Julian Kerbis Peterhans, researcher at the Field Museum, agrees.  "These mice are long-footed, kind of like a kangaroo.  They sit up on their haunches, and they wade through shallow streams with their whiskers on the water's surface detecting movements, like sonar.  They have unusually large brains in order to process this sensory information from their whiskers when they hunt. They're cute, too.  When I caught my first one some thirty years ago, it was the most beautiful African mouse I'd ever seen, it had water repellent fur that's very thick and lush and warm and cozy.  They're incredibly soft, and they have this remarkable snow-white belly."
The second paper appeared in the journal Biotropica, and is a study of a bird called the Sulawesi babbler (Pellorneum celebense) that lives on a number of islands in eastern Indonesia.  What the researchers found was that the babblers were undergoing rapid evolution on the smaller islands in its range -- the birds on smaller islands had a greater amount of sexual dimorphism (physical difference between the sexes) than birds on larger islands.  In particular, the size difference was measurably greater on the small islands of Kabaena, Muna, and Buton. 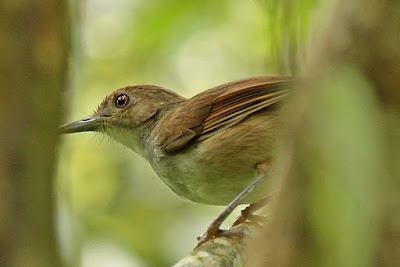 [Image licensed under the Creative Commons A.S.Kono, Pelanduk sulawesi 1, CC BY-SA 3.0]
What the zoologists think is going on is that on smaller islands, with limited resources, having high sexual dimorphism helps to decrease competition if the resources are partitioned.  Partitioning is seen in a lot of groups of related species -- the wood warblers of my home state of New York are a good example, where you might have six or seven species of small, forest-dwelling, insect-eating birds in the same quarter of an acre of woods.  The way they've "solved" the problem of high competition -- and I put "solved" in quotation marks, because of course the birds didn't figure it out -- is that they each occupy different bits of the habitat.  Blackburnian warblers are usually high up in the treetops, yellow-rumped warblers in the low understory, black-throated-blue warblers in the middle parts of trees, and so on.
It's a remarkably efficient way of decreasing interspecific competition.
But this is one of only a handful of cases I know of where the resources are partitioned between different sexes of the same species.  (The others I'm aware of are some tropical hummingbirds, where the bill shapes of males and females are adapted to fit different species of flowers, and the extinct huia, a bird from New Zealand for whom the male and female bill shape were so different you might well think they're different species.)
The third paper is about the rediscovery of an animal that hasn't been seen for fifty years -- a species of elephant shrew from Somalia.  Elephant shrews are neither shrews nor (obviously) elephants.  They have a superficial similarity to shrews, but genetic analysis has shown that they are actually more closely related to elephants than they are to shrews.  (Another indicator that appearance has little relevance to genetic closeness.)  They're in their own order, Macroscelidia. 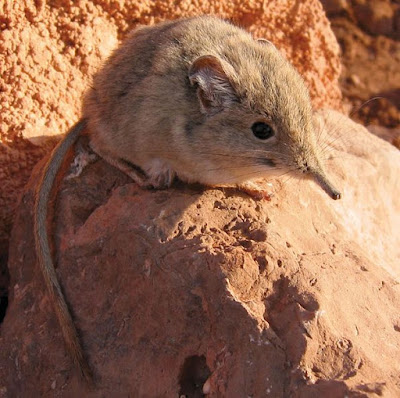 [Image licensed under the Creative Commons Galen B. Rathbun, Petrosaltator rozeti-Zootaxa, CC BY 3.0]
In any case, the Somali sengi (Elephantulus revoilii) was known from thirty-nine different specimens in museums, but hadn't been seen in the wild in fifty years -- until now.  A colony of them was discovered in the country of Djibouti, the exact location of which is being kept secret.
The rediscovery, and the genetic information scientists are gleaning from these animals, looks like it's going to force a re-analysis of the taxonomy of the group, with the Somali sengi ended up in its own, new genus (Galegeeska).  The research is ongoing, and we'll undoubtedly be finding out more about these strange little animals of the east African desert.
So that's our news from the zoological world for today.  All in all, a much happier topic than a lot of others I could have chosen.  Better to focus, at least for a while, on the wonderful and multifarious critters out there in the world -- many of which we have just begun to understand.
**********************************