Dear Skeptos...
After today I'm taking a quick break -- this will be my only post this week.  I'll be back on Monday, November 2.  Until then, please keep topic suggestions coming!
cheers,
Gordon
*********************************
Today is my sixtieth birthday.
I'm not a big believer in the significance of milestones, but this one seems to be pretty major.  Partly, it's my incredulity over turning sixty when I don't feel sixty.  Well, in some ways I do; I've got more aches and pains and minor physical issues than I used to.  Fortunately, at this point, nothing at all serious.  I've got some gray, especially in my facial hair, so I keep it trimmed really short to minimize the impact.  I have a few more wrinkles and laugh lines.  I need reading glasses (either that, or my conjecture that everyone is printing in smaller and smaller fonts is correct).  My stamina for running is less than it used to be.
Overall, though, I can't complain.  I've made it here relatively unscathed. 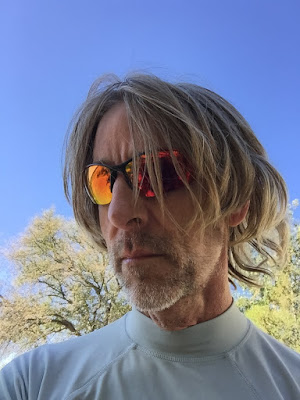 What sixty looks like
Part of that is good luck, and part is good genes.  I come from a family of long-lived people.  My parents both made it to 83, and my dad especially looked a consistent ten years younger than he actually was, pretty much his whole life.  His mom, my beloved Grandma Bertha, lived to 93, and her eccentric Aunt Clara died at 101.  (Great Aunt Clara was almost completely blind during the last ten years of her life, but still walked daily around her home town of Wind Ridge, Pennsylvania with her red-tipped cane.  The story is that she made a point of whapping people she didn't like with her cane as she passed them.  "Accidentally."  Just showing that irascibility runs in my father's family as well as longevity.)
So as far as genetics goes, I got dealt a pretty good hand.
I also attribute some of it, though, to the fact that I still have the sense of humor of a twelve-year-old.  Nothing keeps you young like retaining your ability to laugh at fart jokes.
Looking back, it's been a wild ride.  I've come a long way in sixty years, both literally and figuratively.  I've been lucky enough to have the opportunity to travel to exotic places like Ecuador and Trinidad and Malaysia.  I live in upstate New York, which I would put in contention for the most beautiful place in the world.  I have two sons I'm proud of.  Despite off-the-scale shyness and social anxiety I'm happily married to the love of my life.  I'm a published author with fifteen books to my name.  I just retired a couple of years ago after a 32-year career teaching science to teenagers, a vocation that was some combination of challenging, fun, frustrating, and exhilarating -- truly a job where you never know what's going to happen next.  With the support of family and friends, two years ago I finally came out publicly as bisexual, shedding decades of shame and fear and finally stepping into the light and saying, "This is who I am."  I've learned a lot about myself and others, especially the deep, aching truth of what a family friend told me when I was six: "Always be kinder than you think you need to be, because everyone you meet is fighting a terrible battle that you know nothing about."  Through it all, I've come out mostly happy, mostly healthy, and entirely glad to be where I am.
I am an incredibly lucky man.
Still, it's a little mind-boggling that I've made five dozen trips around the Sun.  It's hard to fathom that it's been that long.  When someone says "twenty years ago," I immediately think, "1980?"  No, that's forty years ago.  Twenty years ago is 2000.  Today's twenty-year-olds were infants when 9/11 happened.  So many of the things I think of as high-magnitude historical events -- the explosion of the Space Shuttle Challenger, the start of the Gulf War, the Exxon Valdez oil spill, the launch of the Hubble Space Telescope, the development of the World Wide Web and email, the breakup of Yugoslavia and the siege of Sarajevo, the Oklahoma City bombing, the signing of the Good Friday Agreement that officially ended the Irish "Troubles" -- all happened before today's twenty-year-olds were born.
I can't fool myself.  I haven't been young for quite some time.  It brings back memories of my grandma, then about eighty, dropping into her favorite rocking chair with a groan, then cocking an eyebrow at me and saying, "You know, Gordon, I'm no spring chicken any more."  I'd usually grin and say, "Grandma, when were you a spring chicken?"  To which she'd retort something like, "Last Thursday, you little pipsqueak.  Now fix me a martini."  And we'd both crack up.
Then I'd fix her a martini.
That's the kind of eighty-year-old I want to be.
I guess there's no avoiding aging, although I do think a lot of it boils down to attitude.  You can't escape the physical stuff completely, although you can ameliorate it by staying active; I'm glad I'm still a runner, and I suspect that I'd be in way worse shape than I am if I'd become sedentary.  But I'm damned if I'll let it get me down.  I remember a friend of mine turning sixty, and he went into a serious depression -- it was so much harder than fifty, he said, "because there's no doubt you're past halfway.  Some people make it to a hundred, but almost no one makes it to a hundred and twenty."
Which might be true, but it's not going to stop me from trying.
So anyhow: happy birthday to me.  Despite my friend's hang-dog attitude, here's to the next five dozen trips.  Maybe my attitude is a little like the guy who fell off the roof of a skyscraper, and as he passes the twentieth floor, someone yells out of a window at him to ask how he's doing, and he shrugs and says, "So far, so good."
But it's better than the alternative.  Much better to relax, enjoy the view, and have a martini.