One of the most curious relics of the past, and one which is a persistent mystery, is the quipu (also spelled khipu) of Andean South America.

A quipu is a linked series of knotted, dyed cotton strings, and were apparently some kind of meaningful device -- but what their meaning was is uncertain, thanks to the thoroughness and determination of Spanish priests in the sixteenth century to destroy whatever they could of the "pagan" Inca culture.  The result is, there are only 751 of them left, which is a pretty small sample if you're interested in decipherment. 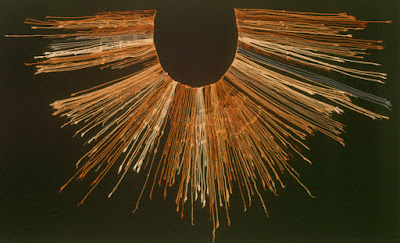 A number of attempts have been made to understand what the patterns of knots meant, but none of them have really panned out.  Some of the possibilities are that they were devices for enumeration, perhaps something like an abacus; a literary device for recording history, stories, or genealogies; or census data.

In fact, the jury's still out on whether they encode linguistic information at all.  An anthropologist named Sabine Hyland has suggested that they do; the color, position of knots, and even the ply of the string combine in 95 different ways to represent a syllabic writing system, she says, and claims that they were intricate family records.  If she's right, the burning of the Incan quipus represents a horrific eradication of the entire cultural history of a people -- something the invading Europeans were pretty good at.

The reason the topic comes up is because of a paper that came out last week in Nature Communications that has a striking parallel to the quipu.  The paper, titled "Optical Framed Knots as Information Carriers," by Hugo Larocque, Alessio d'Errico, Manuel Ferrer-Garcia, and Ebrahim Karimi (of the University of Ottawa), Avishy Carmi (of Ben-Gurion University), and Eliahu Cohen (of Bar Ilan University), describes a way of creating knots in laser light that could be used to encode information.  The authors write:

Modern beam shaping techniques have enabled the generation of optical fields displaying a wealth of structural features, which include three-dimensional topologies such as Möbius, ribbon strips and knots.  However, unlike simpler types of structured light, the topological properties of these optical fields have hitherto remained more of a fundamental curiosity as opposed to a feature that can be applied in modern technologies.  Due to their robustness against external perturbations, topological invariants in physical systems are increasingly being considered as a means to encode information.  Hence, structured light with topological properties could potentially be used for such purposes.  Here, we introduce the experimental realization of structures known as framed knots within optical polarization fields.  We further develop a protocol in which the topological properties of framed knots are used in conjunction with prime factorization to encode information.

"The structural features of these objects can be used to specify quantum information processing programs," said study lead author Hugo Larocque, in an interview in Science Daily.  "In a situation where this program would want to be kept secret while disseminating it between various parties, one would need a means of encrypting this 'braid' and later deciphering it.  Our work addresses this issue by proposing to use our optical framed knot as an encryption object for these programs which can later be recovered by the braid extraction method that we also introduced.  For the first time, these complicated 3D structures have been exploited to develop new methods for the distribution of secret cryptographic keys.  Moreover, there is a wide and strong interest in exploiting topological concepts in quantum computation, communication and dissipation-free electronics.  Knots are described by specific topological properties too, which were not considered so far for cryptographic protocols." 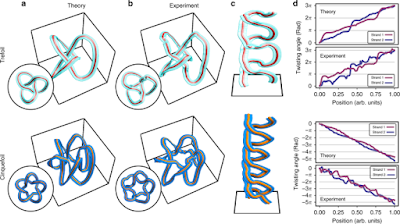 A few of the research team's knotted beams of light

I have to admit that even given my B.S. in physics, most of the technical details in this paper went over my head so fast they didn't even ruffle my hair.  And I know that any similarity between optical framed knots and the knots on quipus is superficial at best, but even so, the parallel jumped out at me immediately.  Just as the Incas (probably) used color, knot position and shape, and ply of the string to encode information, these scientists have figured out how to encode information using intensity, phase, wavelength, polarization, and topological form to do the same thing.

Which is pretty amazing.  I know the phrase "reinventing the wheel" is supposed to be a bad thing, but here we have two groups independently (at least, as far as I know) coming up with analogous solutions for the same problem -- how to render information without recourse to ordinary symbology and typography.

Leaving me awestruck, as always, by the inventiveness and creativity of the human mind.