Life at the center

Appeal to Authority is simultaneously one of the simplest, and one of the trickiest, of the fallacies.

The simple part is that one shouldn't rely on someone else's word for a claim, without some demonstration of evidence in support.  Just saying "Neil de Grasse Tyson said so" isn't sufficient proof for a conjecture.

On the other hand, there are times when relying on authority makes sense.  If I claimed that Neil de Grasse Tyson was wrong in the realm of astronomy, the likelihood of my being wrong myself is nearly 100%.   Expertise is worth something, and Tyson's Ph.D. in astrophysics certainly gives his statements in that field considerable gravitas.

The problem is that when confronted with a confident-sounding authority, people turn their own brains off.   And the situation becomes even murkier when experts in one field start making pronouncements in a different one.

Take, for example, Robert Lanza, a medical researcher whose work in stem cells and regenerative medicine has led to groundbreaking advances in the treatment of hitherto incurable diseases.  His contributions to medical science are undeniably profound, and I would consider his opinion in the field of stem cell research about as close to unimpeachable as you could get.  But Lanza hasn't been content to stay within his area of specialization, and has ventured forth into the fringe areas of metaphysics -- joining people like Fritjof Capra in their quest to show that quantum physics has something to say about consciousness, souls, and life after death.

Let's start with Lanza's idea of a "biocentric universe," which is defined thusly:

Biocentrism states that life and biology are central to being, reality, and the cosmos— life creates the universe rather than the other way around.  It asserts that current theories of the physical world do not work, and can never be made to work, until they fully account for life and consciousness.  While physics is considered fundamental to the study of the universe, and chemistry fundamental to the study of life, biocentrism claims that scientists will need to place biology before the other sciences to produce a theory of everything.

Which puts me in mind of Wolfgang Pauli's famous quote, "This isn't right. This isn't even wrong."  Biocentrism isn't really a scientific theory, in that it makes no predictions, and therefore de facto isn't falsifiable.  And Lanza's reception on this topic has been chilly at best.  Physicist Lawrence Krauss said, "It may represent interesting philosophy, but it doesn't look, at first glance, as if it will change anything about science."  Physicist and science writer David Lindley agrees, calling biocentrism "a vague, inarticulate metaphor."

And if you needed further evidence of its lack of scientific rigor, I must also point out that Deepak Chopra loves biocentrism.  "(Lanza's) theory of biocentrism is consistent with the most ancient wisdom traditions of the world which says that consciousness conceives, governs, and becomes a physical world," Chopra writes.  "It is the ground of our Being in which both subjective and objective reality come into existence."

As a scientist, you know you're in trouble if you get support from Deepak Chopra.

And there's a further problem with venturing outside of your field of expertise.  If you make unsupported claims, then others will take your claims (with your name appended to them, of course) and send them even further out into the ether.  Which is what happened recently over at the site Learning Mind, where Lanza's ideas were said to prove that the soul exists, and death is an illusion:

(Lanza's) theory implies that death simply does not exist.  It is an illusion which arises in the minds of people. It exists because people identify themselves with their body.  They believe that the body is going to perish, sooner or later, thinking their consciousness will disappear too.

In fact, consciousness exists outside of constraints of time and space.  It is able to be anywhere: in the human body and outside of it.  That fits well with the basic postulates of quantum mechanics science, according to which a certain particle can be present anywhere and an event can happen according to several, sometimes countless, ways.

Lanza believes that multiple universes can exist simultaneously.  These universes contain multiple ways for possible scenarios to occur.  In one universe, the body can be dead.  And in another it continues to exist, absorbing consciousness which migrated into this universe.  This means that a dead person while traveling through the same tunnel ends up not in hell or in heaven, but in a similar world he or she once inhabited, but this time alive.  And so on, infinitely.

Which amounts to taking an untestable claim, whose merits are best left to the philosophers to discuss, and running right off a cliff with it.

As I've said more than once: quantum mechanics isn't some kind of fluffy, hand-waving speculation.  It is hard, evidence-based science.  The mathematical model that is the underpinning of this description of the universe is complex and difficult for the layperson to understand, but it is highly specific.  It describes the behavior of particles and waves, on the submicroscopic scale, making predictions that have been experimentally supported time after time. 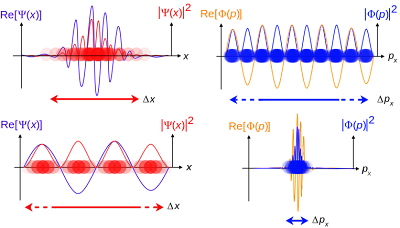 [Image is in the Public Domain]
And that's all it does.   Quantum effects such as superposition, indeterminacy, and entanglement have extremely limited effects on the macroscopic world.  Particle physics has nothing to say about the existence of the soul, the afterlife, or any other religious or philosophical claim.  And even the "Many Worlds" hypothesis, which was seriously put forth as a way to explain the collapse of the wave function, has largely been shelved by everyone but the science fiction writers because its claims are completely untestable.

To return to my original point, Appeal to Authority is one of those fallacies that seem simpler than they actually turn out to be.  I have no doubt that Robert Lanza is a genius in the field of regenerative medicine, and I wouldn't hesitate to trust what he says in that realm.  But his pronouncements in the field of physics appear to me to be unfalsifiable speculation -- i.e., not scientific statements.  As such, biocentrism is no better than "intelligent design."  What Adam Lee, of Daylight Atheism, said about intelligent design could be applied equally well to biocentrism:

But as such, I'm sure biocentrism is going to be as popular amongst the woo-woos as ID is amongst the fervently religious.  For them, "unfalsifiable" means "you can't prove we're wrong."

"Therefore we're right. q.e.d. and ha ha ha."
***************************************
This week's Skeptophilia book recommendation is brand new, and is as elegiac as it is inspiring -- David Attenborough's A Life on Our Planet: My Witness Statement and a Vision for the Future.
Attenborough is a familiar name, face, and (especially) voice to those of us who love nature documentaries.  Through series such as Our Planet, Life on Earth, and Planet Earth, he has brought into our homes the beauty of nature -- and its desperate fragility.
At 93, Attenborough's A Life on Our Planet is a fitting coda to his lifelong quest to spark wonder in our minds at the beauty that surrounds us, but at the same time wake us up to the perils of what we're doing to it.  His message isn't all doom and gloom; despite it all, he remains hopeful, and firm in his conviction that we can reverse our course and save what's left of the biodiversity of the Earth.  It's a poignant and evocative work -- something everyone who has been inspired by Attenborough for decades should put on their reading list.
[Note: if you purchase this book using the image/link below, part of the proceeds goes to support Skeptophilia!]