The gospel according to Tolkien

Markus Davidsen, a Ph.D. candidate in Religious Studies at Leiden University in the Netherlands, thought he'd write his dissertation about people who believe that the Jedi religion, made famous by Star Wars, is real.  But after he began his research, he seems to have decided that that was just too silly a topic to research, so he changed his mind.

And decided to research people who believe that the religious schema from J. R. R. Tolkien's Lord of the Rings is real, instead.

Yes, we're talking Elves, and the whole Valar and Maiar thing from The Silmarillion.  And that there have been a series of massive cataclysms, including the one caused by Fëanor forging the Silmarils (a battle which "reshaped Middle-Earth"), and one that sank the continent of Númenor, not to mention the more famous Battle of Five Armies (from The Hobbit) and Battle of the Pelennor Fields (from The Return of the King).  All of which, mysteriously, have left no archaeological traces whatsoever.

But that's not all.  Many of these people think that they are Elves.  Or descended from the Valar.  And there are enough such folks that Davidsen was inundated with requests to participate in his research.  When asked how he found Latter-Day Elves, Davidsen responded, "Actually, they found me.  My graduation thesis on Jedis won a prize and that generated lots of publicity in Mare [the official newspaper of Leiden University] too.  As a result, those people got in touch with me: one group of Tolkien followers would put me in touch with another and it snowballed from there. The groups turned out to be quite diverse too, so I could compare them to each other." 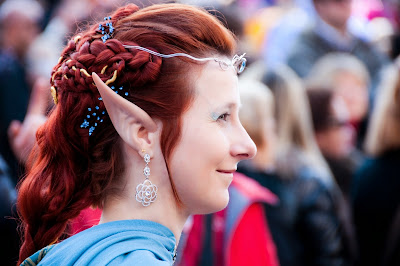 [Image licensed through the Creative Commons Giorgio Minguzzi from Italy, Elf, Tolkien (5503256855), CC BY-SA 2.0]
Allow me to emphasize; these were not some folks playing role-playing games, a sort of Middle-Earth version of the Society for Creative Anachronism.  These people are serious.

And of course, what would a religion be without schisms and squabbling?  "There are those who swear that they themselves are descended from Elves and accordingly have Elvish genes," Davidsen says.  "That’s some claim, and taking it too far for the people who only claim to have Elvish souls and who dissociate themselves from that group."

Others, Davidsen says, go right to the top, worship-wise.  "Yet another group say they not remotely related to Elves, but that there is another world in which the Valar exist," he said.  "They use rituals to try and contact the Valar.  Some draw a circle on the ground, spiritually cleanse it and then evoke the Valar while others go on a kind of shamanic journey with their spirits travelling to another world."

Right.  Okay.  Because it's not like Tolkien made the whole thing up, or anything.

Davidsen, fortunately, agrees.  On the other hand, he says, "This kind of religion isn’t any dafter than other faiths, we’re just used to that particular madness.  We think it’s normal for Catholics to consume the flesh and blood of their God, but when the modern vampire movement says they draw powers from blood, we think they’re loonies.  It’s not really fair.  Buddhism dictates that some people have a Buddha nature, which is not essentially different from the Tolkien-esque idea of having an Elvish nature."

Which is spot-on, even if predictably I think it's all a lot of lunacy.  I tend to agree with Stephen F. Roberts, who said the following to a devout Christian: "I contend we are both atheists.  I just believe in one fewer god than you do.  When you understand why you dismiss all the other possible gods, you will understand why I dismiss yours."

Now, understand, as religions go, Tolkienism (or whatever it's called) at least has one selling point; it's got a beautiful narrative.  If I was forced to choose a fictional world to live in, Middle-Earth would come near the top.  It's got a grandeur, a breadth of scope, like no other fantasy world I've ever read about, and (best of all) the good guys win.

Which is more than you can say for the world of, say, the Lovecraftian mythos.  There, you do everything you can to worship Yog-Sothoth, or whoever, and for your devotion you get your arms ripped off and your face melted.  That's one fictional religion I'm glad isn't real.