I remember when I first ran into the rather mind-blowing concept that the familiar elements we have here on Earth -- oxygen, nitrogen, carbon, silicon, and so on -- hadn't always existed.

The discovery that one element can transmute into another and that elements (under the right circumstances) can be created -- the dream of the ancient alchemists -- ran completely contrary to the prior understanding that atoms are unchanging.  (In fact, even the name atom comes from the Greek ἄτομος, meaning "cannot be cut.")

But when Henri Becquerel and the Curies discovered radioactivity, and realized that there were naturally occurring elements that could change into different ones, it overturned the model of atoms and elements being eternal.  This, of course, opened up the question of where they'd come from originally, a question that only became more important to answer when it was discovered that the universe was 73% hydrogen and 25% helium -- the remaining 2% accounts for everything else.

The answer is that most of the elements are synthesized in the cores of stars, which act as stellar forges to produce every element on the table with the exception of hydrogen.  Carl Sagan's famous statement that we are made of starstuff is nothing less than the unvarnished truth.  (One of the most poignant statements he made in his series Cosmos was, "Our ancestors worshiped the stars, and they were far from foolish.  We are right to revere the Sun and the stars -- for we are their children.")

Since the first discovery that elements can be created and destroyed, we've come to understand pretty well what the origin of each is.  Here's a fascinating twist on the periodic table, showing the origin of each of the elements: 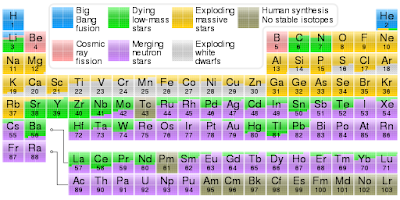 We're inextricably linked to the rest of the universe by our common chemistry.

Not only are the atomic building blocks the same, but we're finding that the molecules they form are remarkably consistent everywhere we look.  The fundamental constituents of organic matter, for example, seem to be abundant in the cosmos.  That surmise got a huge boost with a paper last week in the Astrophysical Journal that describes research into the constituents of dust clouds forming around massive young stars -- dust clouds that eventually will coalesce to form planets.  In those clouds, the researchers found the spectral fingerprints of massive quantities of water, ammonia, methane, hydrogen cyanide, carbon disulfide, and acetylene -- some of the raw materials that given an energy source will spontaneously generate such pivotal molecules as amino acids, simple sugars, and the purine and pyrimidine bases of DNA and RNA.

"We’re seeing many more molecular signatures than were ever seen before at these wavelengths,” said Andrew Barr, lead author of the study and a doctoral candidate at Leiden University, in a press release from NASA.  "It turns out that these stars are like chemical factories churning out molecules important for life as we know it and we just needed the right kind of observations to see them."


My son and I were just talking about how mind-bogglingly huge the universe is -- the latest estimate is that there are one billion trillion stars in the observable universe (that's 1 followed by 21 zeroes).  If even a tiny fraction of those have life, that is still an enormous amount of cosmic biodiversity.  And it seems like every time we look at one of the variables in the famous Drake equation, the attempt by astronomer Frank Drake to break down the likelihood of intelligent life in the universe by looking at the probability of each of the necessary steps to produce it, we have to revise our estimates upward.  Exoplanet systems are apparently the rule, not the exception.  Organic chemistry, as last week's paper showed, is kind of ubiquitous out there.  We've known since the Miller-Urey experiment about the easy self-assembly of complex biological molecules given raw materials and an energy source.
It looks like we're getting closer and closer to the message of another quote by Carl Sagan, this one from his brilliant novel Contact: "If we're the only ones in the universe, it seems like an awful waste of space."
***************************************
This week's Skeptophilia book recommendation is brand new, and is as elegiac as it is inspiring -- David Attenborough's A Life on Our Planet: My Witness Statement and a Vision for the Future.
Attenborough is a familiar name, face, and (especially) voice to those of us who love nature documentaries.  Through series such as Our Planet, Life on Earth, and Planet Earth, he has brought into our homes the beauty of nature -- and its desperate fragility.
At 93, Attenborough's A Life on Our Planet is a fitting coda to his lifelong quest to spark wonder in our minds at the beauty that surrounds us, but at the same time wake us up to the perils of what we're doing to it.  His message isn't all doom and gloom; despite it all, he remains hopeful, and firm in his conviction that we can reverse our course and save what's left of the biodiversity of the Earth.  It's a poignant and evocative work -- something everyone who has been inspired by Attenborough for decades should put on their reading list.
[Note: if you purchase this book using the image/link below, part of the proceeds goes to support Skeptophilia!]