I try to avoid posting about claims that are simply ridiculous, because (1) ridiculous claims are a-dime-a-dozen on the interwebz, and (2) low-hanging fruit has kind of lost its appeal for me.  But every once in a while I happen on something that is so ridiculous that it seems to be almost inspired.

Kind of like an art piece in the Museum of Wackiness.

I learned about this one from a loyal reader of Skeptophilia who sent me a link with the message, "Oh, Gordon, did you know there were 'DNA waves'?  As well as black holes at the center of the earth?"

Well, I couldn't read something like that without clicking the link.  It brought me to the wonderful site RetractionWatch, which is devoted to articles on retractions and errata in scientific publications, something absolutely critical to the scientific process.

This one is a doozy, although the journal that published the original paper -- the Open Access Macedonian Journal of Medical Sciences -- might as well open up a permanent page on RetractionWatch.  The particular paper this post references has the following title, which I swear I'm not making up:

The paper, apparently, was part of an issue on "Global Dermatology."  What any of this has to do with skin diseases is beyond me.
(Nota bene: there's a link to the paper in the RetractionWatch article, but it requires a login to read it, and no way in hell am I giving the Open Access Macedonian Journal of Medical Sciences my information about anything.  And besides, the original paper may have been taken down by now.  So I'm restricted to the excerpts in RetractionWatch, which admittedly limits my knowledge about the paper itself.)
Fortunately, RetractionWatch was kind enough to include the paper's abstract, which I reproduce here verbatim:

Recently, some scientists from NASA have claimed that there may be a black hole like structure at the centre of the earth.  We show that the existence of life on the earth may be a reason that this black hole like object is a black brane that has been formed from biological materials like DNA.  Size of this DNA black brane is 109 times longer than the size of the earth’s core and compacted interior it.  By compacting this long object, a curved space-time emerges, and some properties of black holes emerge.  This structure is the main cause of the emergence of the large temperature of the core, magnetic field around the earth and gravitational field for moving around the sun.  Also, this structure produces some waves which act like topoisomerase in biology and read the information on DNAs.  However, on the four-dimensional manifold, DNAs are contracted at least four times around various axis’s and waves of earth couldn’t read their information.  While, by adding extra dimensions on 4 +n-dimensional manifold, the separation distance between particles increases and all of the information could be recovered by waves.  For this reason, each DNA has two parts which one can be seen on the four-dimensional universe, and another one has existed in extra dimensions, and only it’s e_ects [sic] is observed.  This dark part of DNA called as a dark DNA in an extra dimension.  These dark DNAs not only exchange information with DNAs but also are connected with some of the molecules of water and helps them to store information and have memory.  Thus, the earth is the biggest system of telecommunication which connects DNAs, dark DNAs and molecules of water.

I read this whole thing with an expression like this on my face: 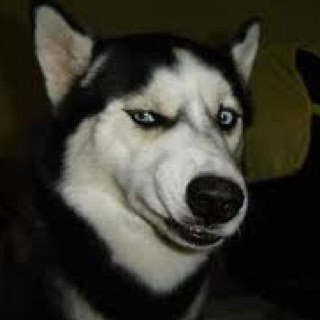 This paper was by Massimo Fioranelli et al., which means that it was the product of more than one brain.  (Although this may be questionable as well, as I will describe momentarily.)  And in fact, this isn't the only paper that was retracted by OAMJMS.  They retracted five papers simultaneously -- and four of them were by Fioranelli's team.  Once again, RetractionWatch kindly provided titles and links to the other papers, which you have to see because they're just that wonderful.  The three other Fioranelli et al. papers were:

The fifth paper, by Nicola Zerbinati et al., had an equally entertaining title:

Which makes me think of someone putting a pork chop in the microwave, and observing that if you turn it on, the fat melts.  I wouldn't recommend it as a method for losing weight, however.

Oh, and apparently, Fioranelli was also the author of a previously-retracted paper attributing COVID-19 to 5G technology.  The man's a veritable fountain of goofiness.

The pièce de résistance of the story, though, is in OAMJMS's statement of retraction, which is too good not to reproduce in full:

An internal investigation has raised sufficient evidence that they are not directly connected with the special issue Global Dermatology and contain inconsistent results.  Several co-authors requested to be excluded from the author list.  As such, we retract these articles from the literature and by guidelines and best editorial practices from the Committee on Publication Ethics.  We apologize to our audience about this unfortunate situation.

The only thing that would have made this better is if the papers had come with a video link showing Fioranelli explaining his theories via interpretive dance.

So you can see how I couldn't resist writing a post about this one.  Opportunities to write about weird ideas from cranks are commonplace; one this bizarre is truly something to be cherished.

But my reaction is probably just due to the black hole at the center of the Earth confusing me by sending waves to add extra dimensions to my dark DNA manifolds.  I hate it when that happens.