What doesn't kill you

In evolutionary biology, it's always a little risky to attribute a feature to a specific selective pressure.

Why, for example, do humans have upright posture, unique amongst primates?  Three suggestions are:

So which is it?  Possibly all three, and other reasons as well.  Evolution rarely is pushed in a particular pressure by just one factor.  What's interesting in this case is that upright posture is a classic example of an evolutionary trade-off; whatever advantage it gave us, it also destabilized our lumbar spines, giving humans the most lower back problems of any mammal (with the possible exceptions of dachshunds and basset hounds, who hardly got their low-slung stature through natural selection).

Sometimes, though, there's a confluence of seeming cause and effect that is so suggestive it's hard to pass up as an explanation.  Consider, for example, the rationale outlined in the paper that appeared this week in Science Advances, called "Increased Ecological Resource Variability During a Critical Transition in Hominin Evolution," by a team led by Richard Potts, director of the Human Origins Program of the Smithsonian Institution.

What the paper looks at is an oddly abrupt leap in the technology used by our distant ancestors that occurred about four hundred thousand years ago.  Using artifacts collected at the famous archaeological site Olorgesailie (in Kenya), the researchers saw that after a stable period lasting seven hundred thousand years, during which the main weapons tech -- stone hand axes -- barely changed at all, our African forebears suddenly jumped ahead to smaller, more sophisticated weapons and tools.  Additionally, they began to engage in trade with groups in other areas, and the evidence is that this travel, interaction, and trade enriched the culture of hominin groups all over East Africa.  (If you have twenty minutes, check out the wonderful TED Talk by Matt Ridley called "When Ideas Have Sex" -- it's about the cross-fertilizing effects of trade on cultures, and is absolutely brilliant.) 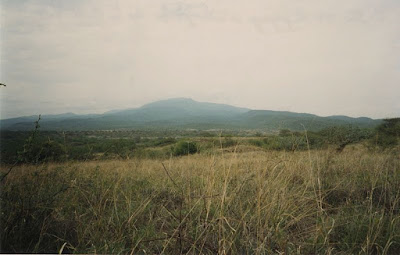 So what caused this prehistoric Great Leap Forward?  The Potts et al. team found that it coincides exactly with a period of natural destabilization in the area -- a change in climate that caused what was a wet, fertile, humid subtropical forest to change into savanna, a rapid overturning of the mammalian megafauna in the region (undoubtedly because of the climate change), and a sudden increase in tectonic activity along the East African Rift Zone, a divergent fault underneath the eastern part of Africa that ultimately is going to rip the continent in two.

The result was a drastic decrease in resources such as food and fresh water, and a landscape where survival was a great deal more uncertain than it had been.  The researchers suggest -- and the evidence seems strong -- that the ecological shifts led directly to our ancestors' innovations and behavioral changes.  Put simply, to survive, we had to get more clever about it.

Although climate change is considered to have been a large-scale driver of African human evolution, landscape-scale shifts in ecological resources that may have shaped novel hominin adaptations are rarely investigated.  We use well-dated, high-resolution, drill-core datasets to understand ecological dynamics associated with a major adaptive transition in the archeological record ~24 km from the coring site.  Outcrops preserve evidence of the replacement of Acheulean by Middle Stone Age (MSA) technological, cognitive, and social innovations between 500 and 300 thousand years (ka) ago, contemporaneous with large-scale taxonomic and adaptive turnover in mammal herbivores.  Beginning ~400 ka ago, tectonic, hydrological, and ecological changes combined to disrupt a relatively stable resource base, prompting fluctuations of increasing magnitude in freshwater availability, grassland communities, and woody plant cover.  Interaction of these factors offers a resource-oriented hypothesis for the evolutionary success of MSA adaptations, which likely contributed to the ecological flexibility typical of Homo sapiens foragers.

So what didn't kill us did indeed make us stronger.  Or at least smarter.

Like I said, it's always thin ice to attribute an adaptation to a specific cause, but here, the climatic and tectonic shifts occurring at almost exactly the same time as the cultural ones seems far much to attribute to coincidence.

And of course, what it makes me wonder is how the drastic climatic shifts we're forcing today by our own reckless behavior are going to reshape our species.  Because we're not somehow immune to evolutionary pressure; yes, we've eliminated a lot of the diseases and malnutrition that acted as selectors on our population in pre-technological times, but if we mess up the climate enough, we'll very quickly find ourselves staring down the barrel of natural selection once again.

Which won't be pleasant.  I'm pretty certain that whatever happens, we're not going extinct any time soon, but the ecological catastrophe we're increasingly seeming to be facing won't leave us unscathed.  I wonder what innovations and adaptations we'll end up with to help us cope?

My guess is whatever they are, they'll be even more drastic than the ones that occurred to our kin four hundred thousand years ago.