I'm a birdwatcher, which in my specific case kind of crosses the line into a mild mental illness.  I've traveled all over the world to see new birds, which is kind of cool, but it's also led me to do stuff like standing calf-deep in the snow, in far-below-freezing temperatures and gale-force winds, to see a rare species of duck that happened to end up for some reason in nearby Cayuga Lake in midwinter.  From the standpoint of seeing a bird species I'd never seen before, it was a great day.

It was a somewhat less-than-great day with respect to frostbite, hypothermia, and people in passing (heated) cars rolling down their windows to yell "What the hell is wrong with you?"

The reason this all comes up because of how excited I am about a recent release of new information by the Bird 10,000 Genomes Project, which has as its fairly lofty goal the sequencing of the genomes for all ten-thousand-plus species of birds currently living on the Earth.

The cool thing about genetic information to determine relationships is that it's much more accurate than relying on such obvious characteristics as external appearance or behavior.  Through genetic analysis, the B10K Genomes Project, as it's affectionately known, has found the following surprises:

Here's a circular representation of what we know so far, with illustrations of a few selected species: 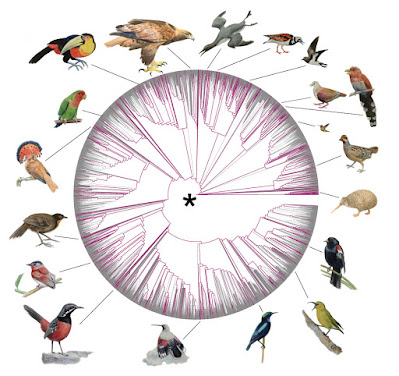 So the study is pretty cool, expanding greatly what we know about the feathered dinosaurs we see flitting about every day.  As the B10K Genome Project site puts it:

The B10K project will allow the completion of a genomic level tree of life of the entire living avian class, decode the link between genetic variation and phenotypic variation, uncover the correlation of genetic evolutionary and biogeographical and biodiversity patterns across a wide-range of species, evaluate the impact of various ecological factors and human influence on species evolution, and unveil the demographic history of an entire class of organisms...  We envision this project will have significant scientific and public impact that will change our understanding of avian biology and evolution, which in turn will affect our understanding of other organisms and open doors to new areas of research.

I'm really looking forward to seeing what else they uncover.  It might not explain my obsession with trying to see every bird there is -- something a friend of mine calls "Pokémon for Adults" -- but it certainly will give me something new to think about when I'm shivering in the snow looking for rare ducks.
*****************************************
This week's Skeptophilia book-of-the-week is one that has raised a controversy in the scientific world: Ancient Bones: Unearthing the Astonishing New Story of How We Became Human, by Madeleine Böhme, Rüdiger Braun, and Florian Breier.
It tells the story of a stupendous discovery -- twelve-million-year-old hominin fossils, of a new species christened Danuvius guggenmosi.  The astonishing thing about these fossils is where they were found.  Not in Africa, where previous models had confined all early hominins, but in Germany.
The discovery of Danuvius complicated our own ancestry, and raised a deep and difficult-to-answer question; when and how did we become human?  It's clear that the answer isn't as simple as we thought when the first hominin fossils were uncovered in Olduvai Gorge, and it was believed that if you took all of our millennia of migrations all over the globe and ran them backwards, they all converged on the East African Rift Valley.  That neat solution has come into serious question, and the truth seems to be that like most evolutionary lineages, hominins included multiple branches that moved around, interbred for a while, then went their separate ways, either to thrive or to die out.  The real story is considerably more complicated and fascinating than we'd thought at first, and Danuvius has added another layer to that complexity, bringing up as many questions as it answers.
Ancient Bones is a fascinating read for anyone interested in anthropology, paleontology, or evolutionary biology.  It is sure to be the basis of scientific discussion for the foreseeable future, and to spur more searches for our relatives -- including in places where we didn't think they'd gone.
[Note: if you purchase this book using the image/link below, part of the proceeds goes to support Skeptophilia!]