I know there are a lot of reasons why people believe weird shit.  It's tempting to settle on the self-congratulatory solution of "Because they're dumber than I am," but I always hesitate to go there because (1) there are lots of inherent biases in our cognitive systems that you can fall for even if you're perfectly intelligent, and (2) I know all too well that I fall for those same biases myself if I'm not careful.

That said, I was sent a link by a loyal reader of Skeptophilia describing something apparently some people believe that left me saying, "Okay, that is incredibly stupid."

The link was to a story by Brent Swancer over at Mysterious Universe called "The Bizarre Tale of the Haunted Website."  You should check out Swancer's article, which goes into considerable detail, but the bones of the story are as follows.

In the eighteenth century, there was a little girl whose name was "Repleh Snatas."  Repleh had a birthmark on her face that the locals said was the mark of the devil, and people started looking askance at the entire family.  The dad became convinced that his daughter was possessed, and locked her in a room full of mirrors to drive the demons out (as one does), but every morning when he'd check on her the mirrors were all cracked and she was as evil as ever.  Ultimately he killed the girl and his wife and finally himself.  The locals refused to give any of them a proper burial, but tied the three bodies to a tree all facing in different directions and let 'em rot right there.

Once again, as one does.

But Repleh was not so easily vanquished.  She disappeared into mirrors, and if you look into a mirror at night sometimes it will crack and in the fractured reflection you'll see her standing behind you.  Then someone started a website about her, and it does weird stuff like not loading properly or actually crashing your computer.  Even if it loads it's still freaky, with collages of scary photographs of creepy children and hair-raising horror-movie-style background music.  And if you go there, you risk getting Repleh's attention, because she's still hanging around apparently, and if she thinks you're getting too curious she might kill you.

Reading this elicited several reactions from me:

I went to the website, which is (unsurprisingly) www.replehsnatas.com, and got the following message:

Before going to replehsnatas.com, there's one more step.  By clicking the button below you'll go through a standard security check, after which you will be redirected to Chrome store and will be given the option to install Secured Search extension.  This extension will offer you a safer web search experience by changing your default search provider.

And my response to that was, "How exactly stupid do you think I am?"  I closed the window, meaning that I never got to see the actual page, but was better than getting whatever malware or virus this was pointing me toward, which would undoubtedly result in my computer running even worse than before.

Despite all this, apparently there are tons of people who think Repleh Snatas is real.  Over on Reddit there's a whole discussion of Repleh and how you shouldn't mess around with her website because she's eeee-vil.

Even though I wasn't successful at getting into her website, I was able to find a couple of photographs that are said to be of the wicked Repleh Snatas.  (Yes, I know she supposedly lived in the eighteenth century, before the invention of photography.  Stop asking questions.)  Here's one of them: 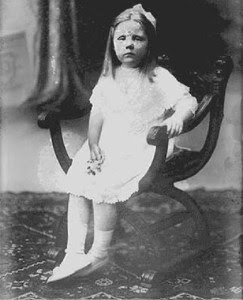 The only problem is that this is actually a photograph of Princess Juliana of the Netherlands (who eventually became Queen Juliana).  This would be more obvious if the people who created the Repleh website and added the image hadn't photoshopped out the handwritten words "Princess Juliana" which are (I shit you not) written across the top of the original.
Here's the other one: 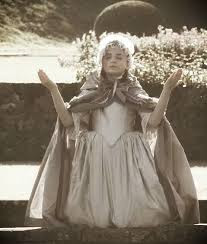 And this one is a still-shot of the actress Helena Avellano from her movie Moondial.
So old Repleh is kind of batting zero, here.  This has not stopped dozens of people from writing about her on True Tales of the Paranormal websites, which I will leave you to find on your own, and wherein you will read multiple accounts of the evil Repleh showing up in mirrors and generally scaring the bejeezus out of people.
As I said, I'm not usually going to point fingers at people for slipping into occasional credulity, as long as they're open to correcting themselves when they see what is actually going on.  We all do it; it's part of human nature.
On the other hand, to believe in Repleh Snatas, you have to have the IQ of a PopTart.  I've read some unbelievable paranormal claims before, but this one has to win the prize for sheer goofiness.  So my tolerance of people's foibles can only be stretched so far.
So I'm issuing a challenge to the supernatural believers out there: c'mon, folks.  Up your game.  You can do better than this.  Hell, a sufficiently motivated elementary-school student could do better than this.  The quality of your claims has really been falling off lately.  I'm expecting some better material to work with.
Get with the program, people.