It's an idea of the divine you don't run into often. The heavenly host as competitors in what amounts to a huge fantasy football game.

While McCaw's play is meant to be comedy, it's not so far off from what a lot of people believe -- that some divine agent, be it God or an angel or something else, takes such an interest in the minutiae of life down here on Earth that (s)he intercedes on our behalf.  As an example, take Paula White -- the "White House Spiritual Adviser" -- who just yesterday led a prayer service in which she called on "angelic reinforcements" to make sure that the vote counting went Donald Trump's way.
While this may seem kind of loony to a lot of us, it's a remarkably common attitude.  How often do you hear someone say things like, "I found my car keys!  Thank you Lord Jesus!"?  The problem for me, aside from the more obvious one of not believing that any of these invisible beings exist, is why Lord Jesus or the Heavenly Host would care more about whether you find your keys than, for example, about all of the ill and starving children in the world.

It's why I was so puzzled by the story in The Epoch Times that a loyal reader of Skeptophilia sent me.  It's called, "When Freak Storms Win Battles, Is It Divine Intervention or Just Coincidence?"  The article goes into several famous instances when weather affected the outcome of a war, to wit:
What immediately struck me about this list was that each time, the winners attributed the event to divine intervention, but no one stops to consider how the losers viewed it.  This isn't uncommon, of course; "History is written by the victors," and all that sort of thing.  But what's especially funny about the first two is that they're supposed to be events in which God meddled and made sure the right side won -- when, in fact, in both cases, both sides were made up of staunch Christians.

And I'm sorry, I refuse to believe that a divine being would be pro-British in the sixteenth century, and suddenly become virulently anti-British two hundred years later.

Although that's kind of the sticking point with the last example as well, isn't it?  First God (or the angels or whatever) manipulate the weather to encourage the Mongols, then kicks the shit out of them when they try to attack Japan.  It's almost as if... what was causing all of this wasn't an intelligent agent at all, but the result of purely natural phenomena that don't give a rat's ass about our petty little squabbles. 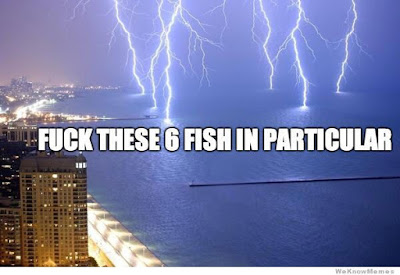 If I ever became a theist -- not a likely eventuality, I'll admit -- I can't imagine that I'd go for the God-as-micromanager model.  It just doesn't seem like anyone whose job was overseeing the entire universe would find it useful to control things on that level, notwithstanding the line from Matthew 10:29 about God's hand having a role in the fall of every sparrow.

"I believe that I am mad," said Vertue presently.  "The world cannot be as it seems to me.  If there is something to go to, it is a bribe, and I cannot go to it: if I can go, then there is nothing to go to."

"Vertue," said John, "give in.  For once yield to desire.  Have done with your choosing.  Want something."

So those are my philosophical musings for this morning.  Seeing the divine hand in everything here on Earth, without any particular indication of why a deity would care, or (more specifically) why (s)he would come down on one side or the other.  Me, I'll stick with the scientific explanation.  The religious one is, honestly, far less satisfying, and opens up some troubling questions that don't admit to any answers I can see.