The human/dog association goes back a long way.

No one knows for sure how it began.  It may be that our distant ancestors fed scraps to wolves, buying their loyalty in order to gain protection for their dwellings from other predators (and hostile humans).  They might have been utilized for their specific skills -- herding, hunting, pulling sleds.

Or it may be that the dogs themselves gave up their wariness when they discovered that humans have sofas. 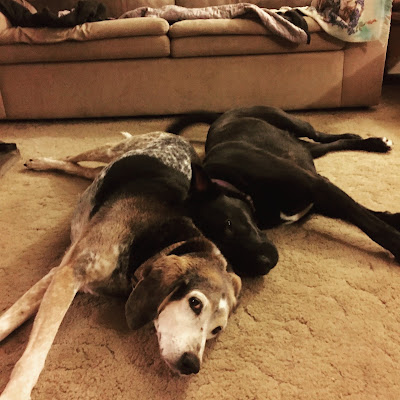 I can say from my own experience that my own two canine companions, Lena (L) and Guinness (R), are of fairly dubious utility.  The only things they've successfully defended the house from are squirrels and the UPS Guy.  Whenever we get a package the dogs go into a frenzy of vicious barking, and it always results in the UPS Guy leaving, reinforcing their conviction that they're providing a vital service.

But whatever the reason, humans and dogs have been inseparable for as long as we have records, including genetic ones, as a paper last week in Science showed.  A trio of teams of researchers, one led by Pontus Skoglund of the Francis Crick Institute of London, another by Greger Larson of the University of Oxford, and the third by Ron Pinhasi of the University of Vienna, joined forces to combine cutting-edge genetics research with archaeology to analyze the genomes of dogs from 100 to 11,000 years ago.

Amongst the many cool features of this study is the window it gives us into human migration, in some cases movements which occurred before there were any written records to keep track.  When human groups moved, they took their dogs with them, so the relationship between domestic dog populations over time acts as a proxy record for the wanderings of their owners.  The study identified different, genetically-distinct lineages, each of which followed humans pretty much wherever they went.

"Dogs are a separate tracer dye for human history," said study co-author Pontus Skoglund.  "Sometimes human DNA might not show parts of prehistory that we can see with dog genomes...  Already, 11,000 years ago, there were at least five different groups of dogs across the world, so the origin of dogs must have been substantially earlier than that."

One interesting outcome of the study is that one of the lineages studied -- European dogs -- became less diverse as time went on.  I wonder if that's due to selection, and the gradual shift of dogs from workers to companions.  Working dogs have to have skills compatible with their jobs, be it herding, hunting, pulling sleds, or whatnot.  Companion dogs just have to be cute and friendly, because honestly, they're mostly home décor items and lap warmers.
Whatever the reason, this analysis of Our Best Friends is pretty fascinating not only for what it tells us about our own history, but the window it gives us into the long relationship between us and our furry friends.  Speaking of which, I gotta go.  Guinness and Lena are barking like hell at something, and I gotta go see if it's a squirrel or the UPS Guy.
He's a cunning one, that UPS Guy.  You gotta watch him like a hawk, or he'll do something awful like put a package on the front porch and then drive away.
If you can imagine someone doing something that evil.