When I taught environmental science, I frequently ran into what I call the "Why Don't We Just...?" mentality.

Presented with an ecological problem -- say, plastic pollution in the ocean -- someone would inevitably propose something that drastically oversimplified the issue.  "Why don't we just equip ships with giant nets to scoop it all up?"  The problems with this include:

It brings to mind the quote by H. L. Mencken: "For every complex problem, there is a solution that is clear, simple, and wrong."

The difficulty is, the global ecosystem is an intricate web of relationships that connect to each other in sometimes unexpected ways, meaning that perturbing the balance is easy and fixing it once you've perturbed it is not.  Take, for example, the attempt to eradicate rats from Palmyra Atoll, which was the subject of a paper in Biotropica last month.

The problem seemed simple enough.  Black rats were accidentally introduced to Palmyra during World War II, and as they have done in so many places, they more or less proceeded to take over.  The low-lying island proved to be a smorgasbord for the invasive rodents, with seabird eggs and young and the seeds and fruits of native trees to feast upon.  The result was predictable enough: seabird populations dropped precipitously, and native plant species were in trouble as well, because the rats ate the seeds so voraciously that there were literally no new saplings to replace any that died.

So, what to do?  To save the ecosystem, a trio of agencies overseeing the island -- the U.S. Fish and Wildlife Service, The Nature Conservancy, and Island Conservation -- got the funding for a massive rat eradication program.  It was successful, and amazingly enough, the last rats on Palmyra were killed in 2011. 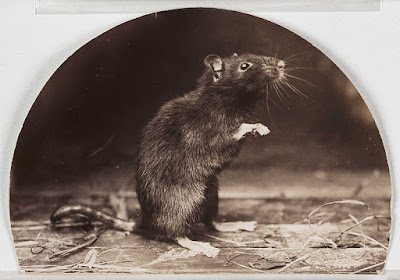 Let's start with the good stuff first.  The Asian tiger mosquito, another exotic import, didn't last too long after the rats were gone.  They're specialists in feeding on mammal blood, and the rats were all there was, so the bloodsucking little fiends all starved to death.  (I love wildlife as much as the next tree-hugger, but I have to say that in the case of the tiger mosquito, good riddance.)  The seabirds bounced back pretty well, with no predators eating the young.

The forests, however, were a different story.

It turned out the rats were not only eating native seeds and fruit, they were keeping down the population of another exotic -- the coconut palm.  With a flourishing rat population, only a very small percent of the coconuts produced made it to the ground without being gnawed to pieces.  Now that the rats are gone, the palms are going nuts (*ba-dum-bum-kssh*) and outcompeting just about every other kind of vegetation on the island.

"I was on the island in 2012, just after the eradication, and could easily navigate through the open jungle understory," said study lead author Anna Miller-ter Kuile, of the University of California - Santa Barbara, in an interview with Science Daily.  "Two years later when I went back, I was wading through an infuriating carpet of seedlings that were taller than me, tripping over piles of coconuts...  While there was a fourteen-fold increase in seedling biomass, most of these new seedlings were juvenile coconut palms, their proliferation left unchecked by the removal of the rats."

As Robert Burns put it, "The best laid plans of mice and men gang aft agley."

It brings to mind the Precautionary Principle: it's always easier and cheaper to prevent a problem than it is to fix it afterward.  The classic example of this is the mess down in south Florida created by the straightening of the Kissimmee River, which used to be a slow, meandering stream snaking its way through the Everglades.  Mostly motivated by draining swampland for agriculture and suburban expansion, the Army Corps of Engineers launched a project in the 1940s to change the river's course, reducing its fifty-kilometer pathway by about half.

They succeeded.  In the process, they destroyed wetlands that had been pristine wildlife habitats, reducing bird populations in some places by 90%.  The deepening of the channel caused a faster water flow, draining so much water from the surrounding land that sinkholes started opening up, some of them actually swallowing up houses.  Silt runoff into the Gulf of Mexico caked coral reefs and wiped out shallow-water marine ecosystems, including the ones supporting lucrative fisheries.

So in the 1970s, the Army Corps of Engineers kind of went, "Oops," and launched the Kissimmee River Restoration Project.  The current cost to return the area to where it was prior to trying to improve things: $578 million.  And that's not even considering how feasible it is to actually fix it.  As the study on Palmyra Atoll shows, it's not easy to repair a damaged ecosystem even if you try.  The "Why Don't We Just...?" mentality is almost always tempting, and almost always wrong.

It seems fitting to end all this with a quote from John Muir, the American environmentalist who founded the Sierra Club: "When you try to pick out one thing by itself, you find it hitched to everything else in the universe."