Getting into the spirit

Me, I stay right the hell away from stores on Black Friday.  I hate shopping in any case, and the rabid crowds only make it worse.  Plus, today marks the first day of the Little Drummer Boy Challenge, a yearly contest in which participants see how long they can make it into the Christmas season without hearing "The Little Drummer Boy," which ranks right up there with "Frosty the Snowman" and "Santa Claus is Comin' to Town" as the most annoying Christmas carol ever written.  I've participated in this contest for six years, and haven't made it to Christmas Day undefeated yet.  Last year, I was taken out of the competition by a clerk in a hardware store who didn't even know all of the freakin' words, and kept having to la-la bits of it:

And so on and so forth.  He was singing it with hearty good cheer, so I felt kind of guilty when I realized that he'd knocked me out of the game and blurted out, "Are you fucking kidding me?" a little louder than I intended, eliciting a shocked look from the clerk and a significant diminishment in the general Christmas cheer amongst those around me. 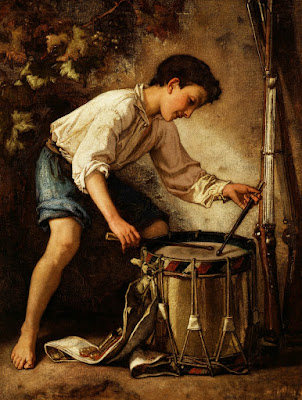 Thomas Couture, The Drummer Boy (1857) [Image is in the Public Domain]
Of course, the Christmas season wouldn't be complete without the Fox News types ramping up the whole imaginary War on Christmas thing.  We atheists have allegedly been waging this war for what, now... ten years?  Eleven?  And yet if you'll look around you, just like the Grinch's attempt at banishing Christmas from Whoville, the holiday season still goes right on, pretty much exactly as it did before.

Oops!  Shouldn't say "holiday," because that's part of the War on Christmas, too, even though the word "holiday" comes from "holy day" and therefore is also religious.  This is a point that seems to escape a lot of the Fox News and OAN commentators and their ilk, but to be fair "grip on reality" has never been their forte anyhow.  And since the War on Christmas is getting to be old hat, this year they decided that we Godless Liberal Democratic Unpatriotic Snowflakes are just not coming across as evil enough, so we must also be conducting a War on Thanksgiving.
Take, for example, Matt Walsh, of Daily Wire, who said last week, "We’ve been worried about the War on Christmas but the Dems just snuck in the side entrance and canceled Thanksgiving instead," presumably because of our unreasonable and anti-American desire to keep everyone who's here at Thanksgiving still alive by Christmas.  Not to be outdone, a headline in Breitbart warned, "Be Prepared for Democrats to Cancel Christmas," prompting a church in Colorado to publish a bulletin titled, "Ten Top Reasons Why Liberals Hate the Holidays."
What is wryly amusing about all of this is that I'm one of the aforementioned liberal atheists, and I love the holidays.  We had a nice turkey-and-stuffing dinner yesterday for Thanksgiving, and I'm already putting together some gifts for friends and family for Christmas and looking forward to putting up a tree.  So it might come as a surprise to Matt Walsh et al. that in December I tell people "Merry Christmas" at least as often as I say "Happy Holidays."  Basically, if someone says "Merry Christmas" to me, I say it back to them; if they say, "Happy Holidays," I say that.  Likewise "Happy Hanukkah," "Blessed Solstice," "Merry Festivus," or "Have A Nice Day."

You know why?  If people speak kindly to me, I reciprocate, because I may be a liberal and an atheist, but I am not an asshole.  So I guess that's three ways in which I differ from Matt Walsh.

Basically, be nice to me, I'll be nice to you.  Unless you're singing "The Little Drummer Boy."  I'm sorry, but my tolerance does have its limits.

In any case, mostly what I plan to do today is to sit around home, recovering from the food-and-wine-induced coma in which I spent most of yesterday evening.  So however you choose to observe the day and the season, I hope you enjoy it, whether you get into the spirit of it or pretty much ignore the whole thing.

Pah-rum-puh-pum-pum.
**************************************
I'm fascinated with history, and being that I also write speculative fiction, a lot of times I ponder the question of how things would be different if you changed one historical event.  The topic has been visited over and over by authors for a very long time; three early examples are Ray Bradbury's "The Sound of Thunder" (1952), Keith Roberts's Pavane (1968), and R. A. Lafferty's screamingly funny "Thus We Frustrate Charlemagne" (1967).
There are a few pivotal moments that truly merit the overused nametag of "turning points in history," where a change almost certainly would have resulted in a very, very different future.  One of these is the Battle of the Teutoburg Forest, which happened in 9 C.E., when a group of Germanic guerrilla fighters maneuvered the highly-trained, much better-armed Seventeenth, Eighteenth, and Nineteenth Roman Legions into a trap and slaughtered them, almost to the last man.  There were twenty thousand casualties on the Roman side -- amounting to half their total military forces at the time -- and only about five hundred on the Germans'.
The loss stopped Rome in its tracks, and they never again made any serious attempts to conquer lands east of the Rhine.  There's some evidence that the defeat was so profoundly demoralizing to the Emperor Augustus that it contributed to his mental decline and death five years later.  This battle -- the site of which was recently discovered and excavated by archaeologists -- is the subject of the fantastic book The Battle That Stopped Rome by Peter Wells, which looks at the evidence collected at the location, near the village of Kalkriese, as well as the historical documents describing the massacre.  This is not just a book for history buffs, though; it gives a vivid look at what life was like at the time, and paints a fascinating if grisly picture of one of the most striking David-vs.-Goliath battles ever fought.
[Note: if you purchase this book using the image/link below, part of the proceeds goes to support Skeptophilia!]