Getting off the merry-go-round

Today's post is about the outcome of last week's election -- but a part of it you might not have heard about, given the media furore surrounding the race for president. 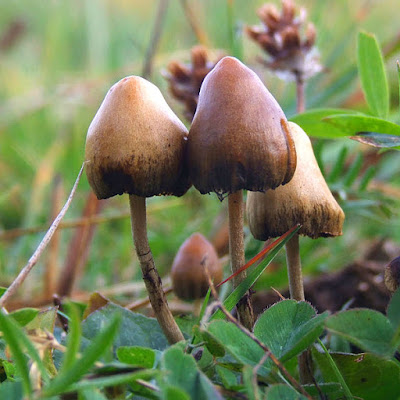 The change came about because of a pair of bills, Measure 109 and Measure 110, which (respectively) made the use of psilocybin legal in a therapeutic setting, including for reasons of "personal growth" (i.e. not to treat a specific condition), and decriminalized the possession of small amounts of a wide range of drugs, making it a minor non-criminal offense on par with a traffic ticket.  I'm not going to get into the second measure, by far the more controversial, except to say that Portugal did the same thing in 2001, diverting the money that would have been spent prosecuting and jailing drug users into treatment programs, and saw voluntary addiction treatment rates rise, and drug use amongst adolescents and deaths due to overdose both decline precipitously.

But passage of the psilocybin measure made me say, "About damn time."  Psilocybin was declared a "Schedule I drug" in 1970, meaning it was claimed to have "a high potential for abuse," "no currently accepted medical use," and "a lack of accepted safety."

All of which, in fact, turned out to be false.  It's non-addictive, rarely if ever causes deleterious side effects, and its efficacy for treating depression has been known for years.  Study after study has come out providing evidence that psilocybin works; so many that it's beginning to sound like the studies disproving the vaccination/autism connection, repeating the same protocol over and over, getting the same result, and saying, "SEE, WE TOLD YOU, IT HAPPENED AGAIN.  BELIEVE US NOW?"

In fact, just last week a study came out in the Journal of the American Medical Association showing that one or two administrations of psilocybin, in a controlled setting, triggered remission of the symptoms of treatment-resistant major depressive disorder for months, possibly years.

This kind of thing is a godsend, because the current state of treatment methodologies for depression resembles a blindfolded game of darts.  I went through three years of considerable hell trying to find an antidepressant that (1) actually mitigated my depression, and (2) didn't give me miserable side effects.  The frustrating part is that an antidepressant that works brilliantly for one person might not work at all for someone else, and no one knows why.  The first two I tried, citalopram (Celexa) and escitalopram (Lexapro), both made me sleepy and completely wiped out my sex drive.  The second one, lamotrigine (Lamictal) gave me thermonuclear-level acid reflux.  The worst was sertraline (Zoloft), which I know is a game-changer for some people, but made me feel like I was at the middle of a neural lightning storm.  I couldn't sit still, couldn't sleep, and couldn't stop out-of-control thoughts that included suicidal ideation.

I got off that stuff fast.

I was on the verge of giving up, but my doctor recommended trying one more, bupropion (Welbutrin).  Welbutrin doesn't give me side effects, which is kind of awesome.  I wouldn't say it erases my depression -- none of them really do that, pretty much for anyone -- but it blunts the edge of the worst of it.  On Welbutrin I don't have the crashing lows I used to get, and have experienced with clocklike regularity every four or five months for pretty much my entire adult life.

On the other hand, if psilocybin works for you (which it does for the vast majority), it works.  People report complete remission of symptoms, something I can't honestly imagine.  Best of all, it only takes one dose to get long-term positive effects.

I take Welbutrin every day; for me it's a maintenance med.  The idea that I could take one dose of something and get off the merry-go-round of self-medication, to be able to throw away the little orange bottle I have to carry around with me when I travel, is incredibly appealing.

I find it somewhere between absurd and appalling that the government has dragged its heels on decriminalizing psilocybin and authorizing its use as a therapeutic.  Okay, fine, regulate it; allow it only under a doctor's orders and a doctor's care.  We can argue about whether recreational drugs should be legal another time.  But here we have something that could dramatically improve the lives of an estimated eighteen million people in the United States -- about seven percent of the population -- addressing the main reason for the sky-high suicide rate, averaging one person choosing to end his/her own life every twelve minutes.

Would I try it?

Damn right I would.  In a heartbeat.

I know whereof I speak about this.  I'm lucky to be alive.  I attempted suicide twice, ages seventeen and twenty, only pulling back from going through with it at the last minute out of fear.  I had another serious period of pretty much continuous suicidal ideation in my mid-thirties, and that time was saved by the knowledge of what it would have done to my kids.  I still struggle some days, but with the love and care of my wife and friends, and a medication that takes away the deepest lows, I'm on an even keel most of the time.  But the worst of what I've experienced I wouldn't wish on anyone, and it's unconscionable that our government is creeping along in addressing a disorder that is a direct contributor to the horrifying statistic that suicide is the second leading cause of death in the United States of people between the ages of ten and twenty-four, and the tenth leading cause of death overall.

It's time to start pushing our leaders into doing something, into following Oregon's lead, and into getting correct information to voters that "decriminalizing drugs" doesn't mean "encouraging everyone to become an addict."  That all current Schedule I drugs aren't the same -- lumping heroin, marijuana, ecstasy, and psilocybin in the same category is somewhere between scientifically inaccurate and downright idiotic.  That people with major depressive disorder should have a choice to try something showing tremendous promise not as a maintenance treatment, but something damn close to a cure.

Please write letters, make calls, get involved.  It could change lives.  Hell, it could save lives.  And I'll end with doing something I rarely do: ask my readers to share this post.  Link it, retweet or repost it, email it.  The word needs to get out there.

If we can get one person out from under the black shadow of depression, help one person to step out into the light, it'll be worth it.