Sometimes I have to tell y'all about something not because it's weird or controversial, but purely because it's cool.

Today we're going to look at some very recent research into what happens during a supernova.  The difficulty with studying supernovas is (1) they're rare, (2) it's not easy to generate comparable conditions in the lab, and (3) if you're close enough to them to get a really good look, you'll probably get vaporized and never even get to the peer review stage with your research.  That a supernova is cataclysmic hardly even bears mention; exactly how cataclysmic is hard even to wrap your brain around.  In a short time -- days to weeks -- a supernova releases more energy than the Sun will over its entire ten billion year lifetime.  The energy release of a typical supernova is 100 quintillion yottajoules.

Being a former science teacher, I thought I knew my metric prefixes, but yotta- was one I didn't know.  Kilo-, mega-, tera- I know; on the other end, micro-, nano-, and pico-.  But yotta- I had to look up.  Turns out it's one septillion; one followed by twenty-four zeroes.  So a supernova releases 100 quintillion of those.

Suffice it to say that 100 quintillion yottajoules is a lottajoules. 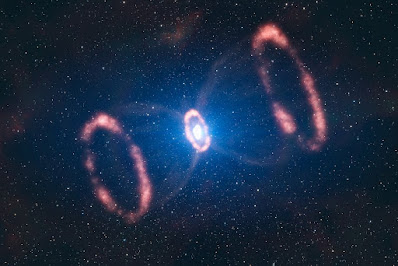 [Image licensed under the Creative Commons ESO/L. Calçada, The material around SN 1987A, CC BY 3.0]

Astonishingly, scientists have now been able to recreate in the lab a burst that for a tiny fraction of a second has the energy release of a supernova.  It's so fast that it doesn't blow the lab to smithereens, but it's still pretty spectacular.  Physicist Hye-Sook Park of the Lawrence Livermore National Laboratory accomplished this by amplifying and then focusing 192 lasers on a tiny target, which implodes and then explodes violently, mimicking for one ten-billionth of a second the conditions that occur the moment a supernova goes kaboom.

The result is a fantastically energetic plasma -- stream of charged particles -- that can pick up 1,000 trillion electron volts of energy, which (for comparison) is about five hundred times the energy that the particles in the largest accelerators have.  This shock wave of charged particles generates a rapidly fluctuating magnetic field.  "The result is a complex feedback process of jostling particles and fields, eventually producing a shock wave," said team member Anatoly Spitkovsky of Princeton University.  "This is why it’s so fascinating.  It’s a self-modulating, self-controlling, self-reproducing structure.  It’s like it’s almost alive.”

One of the things that Park's group was looking for was a sign of the Weibel instability -- a pileup of charged particles moving in opposite directions, which was predicted to happen as the outflowing plasma from the supernova met the plasma of the interstellar medium.  The instability occurs because the outward surge isn't uniform, so it breaks into streams that interlace with inward-streaming interstellar plasma like the your fingers when you clasp your hands together.  These streamers are moving charges -- i.e., an electric current.  And any electric current generates a magnetic field, which then acts to reinforce the positions, directions, and speeds of the particle streams.

Which is exactly what Park's experiment did.

And not to overload you with superlatives, but the speed of these streams is staggering -- 1,500 kilometers a second, enough to circle the Earth twice in a little less than a minute.  Because the magnitude of the magnetic field is dependent on the current speed, this produces huge field strengths -- in that one ten-billionth of a second, it created a magnetic field of 30 tesla, which is twenty times the strength of the magnetic field in an MRI machine.

One of the coolest things about all this is how excited Park gets when one of her experiments succeeds.  "I still clearly remember the time when I was seeing something nobody’s seen," she said.  "When things go well, everyone nearby knows.  I've heard people say, 'We can hear Hye-Sook screaming.'"

This kind of excitement in discovery is what science is all about -- the thrill of finding out something new about the universe.  It brings to mind the quote by the brilliant German chemist Carl Wilhelm Scheele: "It is the truth alone that we desire to know, and what a joy there is in discovering it."