Picture a place you know well.  Your house, your apartment, a park, a church, a school.  You can probably imagine it, remember what it's like to wander around in it, maybe even visualize it to a high level of detail.

Now, let's change the perspective to one you probably have never taken.  Would you be able to draw a map of the layout -- as seen from above?  An aerial view?

Here's a harder task.  In a large room, there are various obstacles, all fairly big and obvious.  Tables, chairs, sofas, the usual things you might find in a living room or den.  You're standing in one corner, and from that perspective are allowed to study it for as long as you like.

Once you were done, could you walk from that corner to the diagonally opposite one without running into anything -- while blindfolded?

Both of these tasks require the use of a part of your brain called the hippocampus.  The name of the structure comes from the Greek word ἱππόκαμπος -- literally, "seahorse" -- because of its shape.  The hippocampus has a role in memory formation, conflict avoidance... and spatial navigation.

Like the other structures in the brain, the hippocampus seems to be better developed in some people than others.  My wife, for example, has something I can only describe as an internal GPS.  To my knowledge, she has never been lost.  When we took a trip to Spain and Portugal a few years ago, we rented a car in Madrid and she studied a map -- once.  After that, she navigated us all over the Iberian Peninsula with only very infrequent checks to make sure we were taking the correct turns, which because of her navigational skills, we always were.

I, on the other hand, get lost walking around a tree. 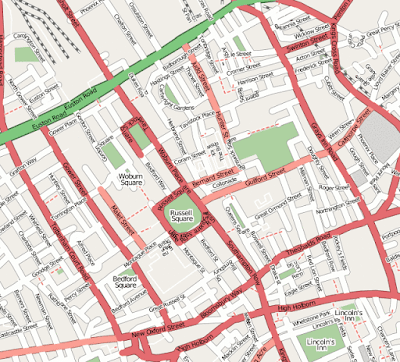 The topic comes up because of a paper last week in Cell that showed something absolutely fascinating.  It's called "Targeted Activation of Hippocampal Place Cells Drives Memory-Guided Spatial Behavior," and was written by a team led by Nick T. M. Robinson of University College London.  But to understand what they did, you have to know about something called optogenetics.

Back in 2002, a pair of geneticists, Boris Zemelman and Gero Miesenböck, developed an amazing technique.  They genetically modified mammalian nerve tissue to express a protein called rhodopsin, which is one of the light-sensitive chemicals in the retina of your eye.  By hitching the rhodopsin to ion-sensitive gateway channels in the neural membrane, they created neurons that literally could be turned on and off using a beam of light.

Because the brain is encased in bone, animals that express this gene don't respond any time the lights are on; you have to shine light directly on the neurons that contain rhodopsin.  This involves inserting fiber optics into the brain of the animal -- but once you do that, you have a set of neurons that fire when you shine a light down the fibers.  Result: remote-control mice.

Okay, if you think that's cool, wait till you hear what Robinson et al. did.

So you create some transgenic mice that express rhodopsin in the hippocampus.  Fit them out with fiber optics.  Then let the mice learn how to run a maze for a reward, in this case sugar water in a feeder bottle.  Watch through an fMRI and note which hippocampal neurons are firing when they learn -- and especially when they recall -- the layout of the maze.

Then take the same mice, put them in a different maze.  But switch the lights on in their brain to activate the neurons you saw firing when they were recalling the map of the first maze.

The result is that the mice picture the first maze, and try to run that pattern even though they can see that they are now in a different maze.  The light activation has switched on a memory of the layout of the maze they'd learned that then overrode all the other sensory information they had access to.

It's as if you moved from Tokyo to London, and then tried to use your knowledge of the roads of Tokyo to find your way from St. Paul's Cathedral to the Victoria & Albert Museum.

This is pretty astonishing from a number of standpoints.  First, the idea that you can switch a memory on and off like that is somewhere between fascinating and freaky.  Second, that the neural firing pattern is so specific -- that pattern corresponds to that map, and no other.  And third, that the activation of the map made the mice doubt the information coming from their own eyes.

So once again, we have evidence of how plastic our brains are, and how easy they are to fool.  What you're experiencing right now is being expressed in your brain as a series of neural firings; in a way, the neural firing pattern is the experience.  If you change the pattern artificially, you experience something different.

So that's today's contribution from the Not Science Fiction department.  I'm wondering if I might be able to get one of those fiber optics things to activate my hippocampus.  Sounds pretty extreme, but I am really tired of getting lost all the time.  There are trees everywhere around here.