I know it's been a tough year.  The pandemic, the final year of King Donald the Demented's reign, the fractious election and its aftermath -- it's a lot to pack into a twelve months.

So it's natural enough that a lot of us are looking forward to saying goodbye to 2020, although rationally speaking, there's no reason that going from December 31 to January 1 should mark any real delineation in world events.  The fact that the most commonly-used calendar in the industrialized world marks the year's end in the middle of winter doesn't mean it's any kind of real phenomenon.  If we went by the Jewish calendar, the Hindu calendar, the Mayan calendar, or any of a variety of other ways humans have gone about marking time, what we call New Year's Day would just be another ordinary day.

That hasn't stopped the prognosticators from doing what they do, of course.  Just in the last couple of weeks, a number of psychic types have revealed to us what 2021 is going to be like.  As you might expect, none of them agree with each other, which you'd think would give people a clue about their veracity.

But as I said earlier, there's not much of this that has to do with rationality.

Let's start with Nicolas Aujula, who warns us against getting too optimistic about any serious improvements in 2021:

I have had a couple of quite horrid visions – one of a male world leader being assassinated.  I couldn’t see who it was, but sensed it sent shockwaves through the world.  Obviously I hope that doesn’t come to fruition.  I’ve also had a vision of a world summit being plagued by a sex scandal and, a rise in far-right politics, particularly in southern Europe, the Middle East and Africa, and a volcanic eruption leading to major weather changes.  And I’ve had the words ‘pig flu’ come to me and seen images of mass panic.  I don’t think it will be another virus, but I can imagine the reaction will be alarmist, given what’s happened this year.

What stands out to me here is the volcanic eruption, which would seem to be a pretty striking predication if a month and a half ago there hadn't been an announcement from geologists that Grimsvötn, Iceland's most active volcano, is showing signs of another big eruption, and that it has a history of larger eruptions than nearby Eyjafjallajökull -- which had a 2010 eruption spewing so much ash into the air that it led to the cancellation of 100,000 airline flights.

So that one just shows that Aujula knows how to read the news.  As far as the rest, when hasn't there been a political sex scandal?  And the "rise of far-right politics" isn't exactly a reach, either, since it's been going on for what, four or five years, now?

Then there's Polish psychic Adam A., who has some Poland-specific predictions whose likelihood I can't speak to with any authority, but also had two visions that are a little baffling:

But when it comes to arcane predictions, no one can beat Michel de Nostredame (better known under his Latinized name of Nostradamus), the sixteenth-century mystic and astrologer who made pronouncements so weird and incomprehensible that you could interpret them to mean damn near anything.  Which, of course, is very helpful after the fact, because no matter what happens you can always go back and find something Nostradamus said that seems to fit if you squint at it in just the right way. 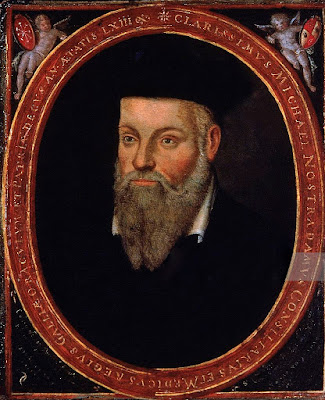 Portrait of Michel de Nostradame, painted posthumously by his son César de Nostredame (ca. 1590) [Image is in the Public Domain]
He wrote in these little four-line stanzas called quatrains, and of course, there are people who are now trying to apply them to 2021.  Here are a few of their better efforts:

This one is supposedly predicted by this quatrain:

After great trouble for humanity, a greater one is prepared,
The Great Mover renews the ages:
Rain, blood, milk, famine, steel, and plague,
Is the heavens fire seen, a long spark running.

So I think we can all agree that's clear as mud.  But predicting a famine is a good bet anyhow, especially given what we're doing to the climate.

2) A devastating earthquake in California

Once again, that's not a reach to predict.  Although even with stretching your interpretation, I have a hard time making this quatrain about California:

The sloping park, great calamity,
Through the Lands of the West and Lombardy
The fire in the ship, plague, and captivity;
Mercury in Sagittarius, Saturn fading.

Okay, California is in the west, at least from the perspective of those of us here in the United States, but the only connection it has to Lombardy is that they're on the same planet.  And yeah, an earthquake is a "calamity," but I don't see what it has to do with ship fires, plagues, and captivity.

And don't even get me started about the whole Mercury in Sagittarius thing.

Finally, no cataclysm would be complete without:

You think I'm making this up.  Here's the pair of quatrains that supposedly predicts it:

Few young people: half−dead to give a start.
Dead through spite, he will cause the others to shine,
And in an exalted place some great evils to occur:
Sad concepts will come to harm each one,
Temporal dignified, the Mass to succeed.
Fathers and mothers dead of infinite sorrows,
Women in mourning, the pestilent she−monster:
The Great One to be no more, all the world to end.

I mean, I guess you could say that predicts zombies as much as it predicts anything, but I'm a little baffled as to why this one is scheduled for 2021.  Other than the fact that we've had pretty much everything else you can think of in 2020, so maybe a zombie apocalypse is the next logical step.

The article I linked has a bunch more of Nostradamus's predictions that supposedly apply to next year, and I encourage you to read it if you're interested in finding out more about what we're in for.  Suffice it to say that it doesn't sound like much fun.  But even with all this, I still can't help but be a little hopeful.  For one thing, it's looking like Donald Trump will finally be relegated to the Little Kids' Table of History, where he can tweet and throw a tantrum and dump his Froot Loops on the floor all he wants without bothering the rest of us.  We'll finally have a president who takes climate change seriously, although I'm under no illusions that the battle is won.

So I'm inclined to agree with the folks who are glad to see 2020 go.  At this point, my general feeling is: bring on the zombies.

One of the most compellingly weird objects in the universe is the black hole -- a stellar remnant so dense that it warps space into a closed surface.  Once the edge of that sphere -- the event horizon -- is passed, there's no getting out.  Even light can't escape, which is where they get their name.
Black holes have been a staple of science fiction for years, not only for their potential to destroy whatever comes near them, but because their effects on space-time result in a relativistic slowdown of time (depicted brilliantly in the movie Interstellar).  In this week's Skeptophilia book-of-the-week, The Black Hole Survival Guide, astrophysicist Janna Levin describes for us what it would be like to have a close encounter with one of these things -- using the latest knowledge from science to explain in layperson's terms the experience of an unfortunate astronaut who strayed too close.
It's a fascinating, and often mind-blowing, topic, handled deftly by Levin, where the science itself is so strange that it seems as if it must be fiction.  But no, these things are real, and common; there's a huge one at the center of our own galaxy, and an unknown number of them elsewhere in the Milky Way.  Levin's book will give you a good picture of one of the scariest naturally-occurring objects -- all from the safety of your own home.
[Note: if you purchase this book using the image/link below, part of the proceeds goes to support Skeptophilia!]