Here in the United States we're celebrating Thanksgiving today, hopefully by staying home and not turning this into a nationwide superspreader event.

It's a day a lot of folks think about their heritage, and the weird old story about the Pilgrims and Native Americans having dinner together gets rehashed, despite the fact that just about everything we're taught about it in elementary school is wrong.  That's the way with cultural mythology, though, and we're hardly the only ones to engage in these sorts of exercises in history-sanitation.

It did, however, make me start thinking about the whole pride-in-ancestry thing, which also strikes me as kind of odd.  To quote my evolutionary biology professor's pragmatic quip, "Your ancestors didn't have to be brilliant or strong or nice; they just had to live long enough to fuck successfully at least once."  Which might be true, but it hasn't stopped me from being interested in my ancestry, while always trying to keep in mind that my family tree is as checkered as anyone else's.

Take, for example, my 3x-great-grandmother, Sarah (Handsberry) Rulong.  She was born some time around 1775 in Montgomery County, Pennsylvania, and her surname probably started out as something Teutonic like Hansberger or Hunsberger, especially given that her marriage certificate says she was a Lutheran.  At the age of twenty she set out with a group -- none of whom were her immediately family members -- to cross just shy of a thousand miles of what was then trackless wilderness, finally ending up in New Madrid, Missouri.  She lived there for a time as a single woman, ultimately marrying three times and outliving all three husbands.  She had a total of nine children, including my great-great grandmother, Isabella (Rulong) Brandt, and was in southern Louisiana in 1830 after being widowed for the third time -- but I don't know what happened to her after that.

Now there's someone who I wish had left me a diary to read.

Sarah's father-in-law, Luke Rulong (the father of her third husband, Aaron Rulong, and my direct ancestor) also was a curious fellow.  We'd tried for years to figure out who he was; the Rulong family was of Dutch origin and lived in Ocean County, New Jersey, but we couldn't find out anything specifically about him in the records of the time.

Turns out we were looking in the wrong place.  Look in the court and jail records of Ocean County in the late eighteenth century, and he was all over the place, having been arrested multiple times for such misdeeds as "riot," "mischief," "disorder," "public drunkenness," and "poaching."

See what I mean about interest not equaling pride?

Most of my ancestry is from France, Scotland, the Netherlands, Germany, and England, something I know both from genealogical research and from the results of my DNA tests.  So I'm solidly northern/western European, something I found a little disappointing.  It'd have been kind of cool to discover a Nigerian ancestor I didn't know about, or something.  But no, I'm pretty much white through and through.

Still, there are some interesting folks back there on my family tree.  I have a great-great uncle who has his own Wikipedia page: John Andrews Murrell, the "Great Western Land Pirate," who was a highwayman in the early 1800s in what is now Tennessee, Alabama, and Mississippi.  Murrell was also a con artist who claimed he was a revivalist preacher, and went around preaching to standing-room-only crowds (apparently he spoke well and knew his Bible; so the praise-the-Lord-and-open-your-wallets televangelists are hardly a new phenomenon).  While he was speaking, the story goes, his cronies would go behind the crowds and loot all the saddlebags.

My great-great-grandfather, John's brother James Henry Murrell, had to go all the way to southern Louisiana to escape the bad reputation John had given the family name.

I have a number of ne'er-do-wells in my ancestry.  One of the wildest stories is about Jean Serreau, one of my mom's forebears, who was a landholder in Nova Scotia (then called Acadia) in the late seventeenth century.  Apparently he came home one day to find his wife in bed with a Swiss army officer, and was so outraged that he walloped the guy in the head with a heavy object and killed him.  (Brings coitus interruptus to new heights, doesn't it?)  He was promptly arrested and looked likely to hang, but his status gave him the leeway to sue for a pardon.  He eventually had to go to France and appeal to the very top -- King Louis XIV -- who upon hearing the case pardoned Serreau immediately.

"Do not fret, Monsieur," the king told Serreau.  "I would have done the same thing."

Like all families, mine has its share of tragedy.  My mother's great-grandmother, Florida (Perilloux) Meyer-Lévy, was widowed at the young age of 37, and unlike the redoubtable Sarah never married again.  Her husband was apparently an unreliable sort, a breeder of horses who "made bad deals while drunk" (this sort of thing seems to run in my family).  Florida was left penniless with nine children, four of them under the age of ten, at his death.  She rented out her home as an inn, making enough to squeak by, but ultimately had to sell the house and ended her life as a domestic servant.  Here's a photo of her, taken shortly before her death at age 77 -- can't you see the hard times etched into her face? 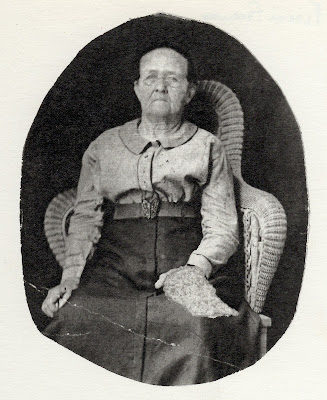 It's tempting to be all edified by her tale, and see in it stalwart courage and an indomitable nature, but in reality, who knows how she dealt with her adversity?  She died when my mother was only three years old, and according to my mom and her cousins, no one much talked about that side of the family.  So anything I could extract about her character from what I know of her life would only be a surmise, with no more anchor in reality than the happy Pilgrims and Natives eating turkey together on the First Thanksgiving.

The truth, of course, is something you can't really tell from looking at a family tree; my ancestry, like everyone's, is made up of a broad cast of characters, kind and nasty, rich and poor, honest and dishonest, servant and master.  We're too quick to jump into fairy tales about noble blood and hereditary lordship, without keeping in mind that a lot of those noble lords were (frankly) nuttier than squirrel shit.  Pride in ancestry has all too often slipped into racism and tribalism and xenophobia, and realistically speaking, it's not even justifiable on a factual basis.

Anyhow, those are my thoughts on Thanksgiving.  We're all the products of a mixed bag of forebears, and if you go back far enough -- honestly, only four thousand years or so, by most anthropologists' estimates -- we're all related, descending from the same pool of ancestors who "fucked successfully at least once."  No real point of pride there, or at least, nothing that you should feel superior about.

Much more important, really, how we treat others here and now.

So for those of you celebrating, I hope you enjoy your meals, and I hope you all stay healthy and happy in these fractious times.  Take care of those around you -- let that be the legacy we leave behind, and maybe our descendants a hundred years from now will remember at least a little bit about who we were.

**************************************
I'm fascinated with history, and being that I also write speculative fiction, a lot of times I ponder the question of how things would be different if you changed one historical event.  The topic has been visited over and over by authors for a very long time; three early examples are Ray Bradbury's "The Sound of Thunder" (1952), Keith Roberts's Pavane (1968), and R. A. Lafferty's screamingly funny "Thus We Frustrate Charlemagne" (1967).
There are a few pivotal moments that truly merit the overused nametag of "turning points in history," where a change almost certainly would have resulted in a very, very different future.  One of these is the Battle of the Teutoburg Forest, which happened in 9 C.E., when a group of Germanic guerrilla fighters maneuvered the highly-trained, much better-armed Seventeenth, Eighteenth, and Nineteenth Roman Legions into a trap and slaughtered them, almost to the last man.  There were twenty thousand casualties on the Roman side -- amounting to half their total military forces at the time -- and only about five hundred on the Germans'.
The loss stopped Rome in its tracks, and they never again made any serious attempts to conquer lands east of the Rhine.  There's some evidence that the defeat was so profoundly demoralizing to the Emperor Augustus that it contributed to his mental decline and death five years later.  This battle -- the site of which was recently discovered and excavated by archaeologists -- is the subject of the fantastic book The Battle That Stopped Rome by Peter Wells, which looks at the evidence collected at the location, near the village of Kalkriese, as well as the historical documents describing the massacre.  This is not just a book for history buffs, though; it gives a vivid look at what life was like at the time, and paints a fascinating if grisly picture of one of the most striking David-vs.-Goliath battles ever fought.
[Note: if you purchase this book using the image/link below, part of the proceeds goes to support Skeptophilia!]