Reality, nightmares, and the paranormal

I was giving some thought this morning to why I've turned into such a diehard doubter of paranormal occurrences.  And I think one of the main reasons is because I know enough neuroscience to have very little faith in my own brain and sensory organs.

I'm not an expert on the topic, mind you.  I'm a raving generalist, what some people describe as "interested in everything" and more critical sorts label as a dilettante.  But I know enough about the nervous system to have taught a semester-long elective in introductory neuroscience for years, and that plus my native curiosity has always kept me reading about new developments.

This is what prompted a friend of mine to hand me the late Oliver Sacks's book Hallucinations.  I love Sacks's writing -- The Man Who Mistook His Wife for a Hat and Musicophilia are tours de force -- but this one I hadn't heard of.

And let me tell you, if you are the type who is prone to say, "I know it happened, I saw it with my own eyes!", you might want to give this book a read.

The whole book is a devastating blow to our confidence that what we see, hear, and remember is reality.  But the especially damning part began with his description of hypnopompic hallucinations -- visions that occur immediately upon waking.  Unlike the more common hypnagogic experiences, which are dreamlike states in light sleep, hypnopompic experiences have the additional characteristic that when you are in one, you are (1) convinced that you are completely awake, and (2) certain that what you're seeing is real.

Sacks describes one of his own patients who suffered from frequent hypnopompic hallucinations.  Amongst the things the man saw were:
Fortunately for him, Sacks's patient was a rational man and knew that what he was experiencing was hallucination, i.e., not real.  But you can see how if you were even slightly inclined to believe in the paranormal, this would put you over the edge (possibly in more than one way).

But it gets worse.  There's cataplexy, which is a sudden and total loss of muscular strength, resulting in the sufferer falling to the ground while remaining completely conscious.  Victims of cataplexy often also experience sleep paralysis, which is another phenomenon that occurs upon waking, and in which the system that is supposed to re-sync the voluntary muscles with the conscious mental faculties fails to occur, resulting in a terrifying inability to move.  As if this weren't bad enough, cataplexy and sleep paralysis are often accompanied by hallucinations -- one woman Sacks worked with experienced an episode of sleep paralysis in which she saw "an abnormally tall man in a black suit...  He was greenish-pale, sick looking, with a shock-ridden look in the eyes.  I tried to scream, but was unable to move my lips or make any sounds at all.  He kept staring at me with his eyes almost popping out when all of a sudden he started shouting out random numbers, like FIVE-ELEVEN-EIGHT-ONE-THREE-TWO-FOUR-NINE-TWENTY, then laughed hysterically."

After this the paralysis resolved, and the image of the man "became more and more blurry until he was gone." 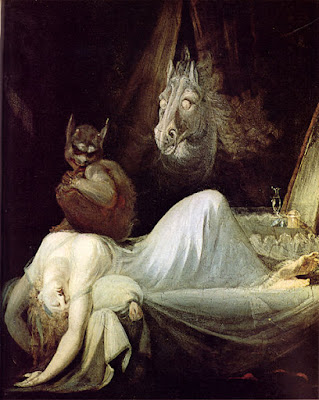 Johann Heinrich Füssli, The Nightmare (1790) [Image is in the Public Domain]
Then there are grief-induced hallucinations, an apparently well-documented phenomenon which I had never heard of before.  A doctor in Wales, W. D. Rees, interviewed three hundred people who had recently lost loved ones, and found that nearly half of them had at least fleeting hallucinations of seeing the deceased.  Some of these hallucinations persisted for months or years.

Given all this, is it any wonder that every culture on Earth has legends of ghosts, demons, and spirits?

Of course, the True Believers in the studio audience (hey, there have to be some, right?) are probably saying, "Sacks only calls them hallucinations because that's what he already believed to be true -- he's as guilty of confirmation bias as the people who believe in ghosts."  But the problem with this is, Sacks also tells us that there are certain medications which make such hallucinations dramatically worse, and others that make them diminish or go away entirely.  Hard to explain why, if the ghosts, spirits, et al. have an external reality, taking a drug can make them go away.

But the psychics probably will just respond by saying that the medication is making people "less attuned to the frequencies of the spirit world," or some such.  You can't win.

In any case, I highly recommend Sacks's book.  (The link to the Amazon page is posted above, if you'd like to buy a copy.)  It will, however, have the effect of making you doubt everything you're looking at.  Not that that's necessarily a bad thing; a little less certainty, and a little more acknowledgement of doubt, would certainly make my job a hell of a lot easier.