Yesterday we looked at a website haunted by the ghost of a little girl named "Repleh Snatas," which would be kind of creepy if she'd actually existed; today we continue in an appropriately surreal fashion, wherein we consider a link sent to me by a different loyal reader of Skeptophilia that gives you instructions to see if you're one of the targets of the Illuminati.
In the website Corruptico: All Answers Exist Within Your Actions (whatever the hell that means) a post appeared called "Microsoft Word 'Spell Check' Embedded Eugenic Code," wherein we learn that to tell if you're destined to be executed when the New World Order arrives, all you have to do is type your name into a Microsoft Word document and see if it flags as misspelled. 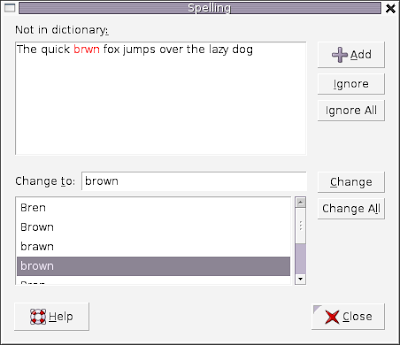 Here's how the author explains it:

There’s a program for that. One created by no other than Microsoft Crypto Jew eugenicist himself, Bill Gates.

According to former US Ambassador to the UN John Bolton’s first nephew, Greg T Dixon, a Masonic High School friend and informant deeply connected to Freemasonry, included within Microsoft’s Word “spell check” lies embedded code that filters out the names of people not making the elitist final eugenic cut.

The program works simply enough, for which anyone, even children, can easily access to check and see their chromosomal eugenic status. All you have to do is type in your last name (surname) to see if it is underlined by a red squiggly line underscoring the surnames of those NOT making the genomic eugenic cut.

Which brings up a variety of questions, the first of which is, what the fuck is a "Crypto Jew?"  Is this some kind of superhero who runs around with a yarmulke and a black cape, defending liberty by using pieces of matzo like ninja throwing stars?  Because that would be kind of cool.  My wife is Jewish, and if I knew she had a secret identity that involved fighting crime by wearing a mask and slinging kosher food at wrongdoers, it would make her even more awesome.

But considering the claim itself, we're on shakier ground.  Spellcheck?  Really?  It couldn't be that the spellcheck feature includes lists of the more common names, so that you don't get flagged every time you write "Smith?"  I guess I'm fortunate; my own last name is also an English word, so I don't get red-lined.  Lucky thing:

Apparently, many people who are being told they are elite and making the “eugenic cut” are actually not going to be around after the Democide, if the true elites have their way, by proxy, their names were purposely left off of earlier editions of MS Word, and this is why older versions prove more accurate.

Go ahead.  If you dare, type your surname into MS Word to see your fate, it’s a fun and simple way to see what side of the railroads tracks you’re on.

Just remember that, if the RED LINE appears, your fate is most likely sealed, and you will probably be killed at a FEMA death camp here very shortly via a hollow point bullet to back of the head.

Well, I'm not sure I would call this "fun," since it involves death camps and gunshots to the head, but it certainly is... interesting.

I do have a few questions, however.  What if your last name gets flagged and your first name doesn't?  This seems kind of unfair for people of Polish descent, such as "John Szczpanski."  Do Our Evil Overlords kill him because of the Szczpanski part, or let him go because his first name is John?

And what about people whose parents were trying to be clever, and gave them first names that appear to be deliberately misspelled?  A few years ago, I taught a girl whose name was "Kaytlynne."  This gets autocorrected to Kaitlyn (in fact, I just had to type it three times to get the Blogspot software to believe me that NO, THIS IS REALLY WHAT I WANT TO WRITE, DAMMIT).  Is this some kind of plot on the part of the parents to get rid of her?  This happens all the time to my wife, whose last name is Bloomgarden.  Autocorrect separates it into "Bloom garden," and then the red lines go away.  Is it telling her, "Maybe you really want to start spelling your name like that from now on.  Hint hint wink wink nudge nudge?"

So anyway, I encourage you to check your own name.  (Sorry for the bad news if you're Polish.)  I'm lucky -- neither my first, middle, nor last name gets red-lined.  Of course, the Illuminati Crypto Jews may change their minds after reading this post.  I'll be able to tell if I start getting mail addressed to "Gordin Bonnetski."