A gentleman I know is moderately autistic, and also suffers from obsessive-compulsive disorder, to the point that he needs some help with his day-to-day life.  He's also brilliant, funny, and sweet, and nearly every time we get together, I learn something new about what it's like to see the world through a neurodivergent brain.
One of the more curious revelations came about because on two days about a week apart, I was giving him a lift in my car.  I drive a blue Honda Element -- the make and model which has sometimes been compared to a toaster on wheels -- so it's a pretty stand-out car.  The second time we went for a drive, as we were walking across the parking lot, I asked my friend, "Do you remember which is my car?"
He said, "Sure," and pointed to it.  Then he said, "I recognized it because I remember the number on the license plate is 4113."
This was a little startling from a variety of standpoints.  First, that he remembered the number on my license plate after seeing it only once before.  I know he's got a pretty phenomenal ability with numbers, so upon reflection, this one wasn't such a surprise.  What I'm still kind of amazed at, though, is how his memory worked.  When I look for my car in a parking lot, I use a search parameter that's entirely visual -- color and shape, whether or not the car has a roof rack, and so on.  For him, apparently the standout feature wasn't my car's color and rather odd contours.  It was the numbers on the plates.  He didn't even mention what are its (to me, at least) more obvious characteristics.
It was interesting to have a momentary glimpse through a mind that is neurodivergent, and also to consider what this tells us about memory retrieval in general.  Some new research that appeared last week in Nature Communications looked at how memories -- at least in neurotypical minds -- are organized, and gives us a little bit of a window into how our brains' filing system works.  And its most fascinating result is that we might want to revisit what we mean by "neurotypical," because the storage-and-retrieval mechanisms between different participants were strikingly varied. 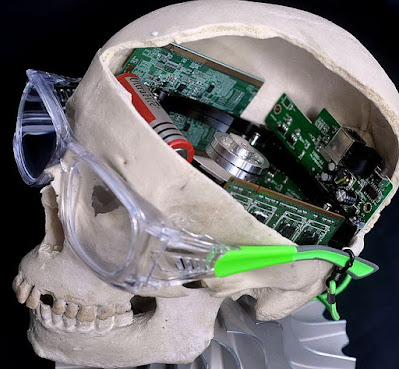 [Image is in the Public Domain]
In "Decoding Individual Identity From Brain Activity Elicited in Imagining Common Experiences," a team made up of Andrew James Anderson, Kelsey McDermott, Brian Rooks, Kathi Heffner, David Dodell-Feder, and Feng Lin (all of the University of Rochester), the authors write:

Everyone experiences common events differently.  This leads to personal memories that presumably provide neural signatures of individual identity when events are reimagined.  We present initial evidence that these signatures can be read from brain activity.  To do this, we progress beyond previous work that has deployed generic group-level computational semantic models to distinguish between neural representations of different events, but not revealed interpersonal differences in event representations.  We scanned 26 participants’ brain activity using functional Magnetic Resonance Imaging as they vividly imagined themselves personally experiencing 20 common scenarios (e.g., dancing, shopping, wedding).  Rather than adopting a one-size-fits-all approach to generically model scenarios, we constructed personal models from participants’ verbal descriptions and self-ratings of sensory/motor/cognitive/spatiotemporal and emotional characteristics of the imagined experiences.  We demonstrate that participants’ neural representations are better predicted by their own models than other peoples’.

The regions of the brain activated in the participants were pretty uniform; but the pattern of activation different considerably.  Calling up memories of the last dance several people went to might require their drawing upon similar brain structures, but one person might remember mostly the music, another the lights and the crowds, and a third focused entirely on who (s)he is dancing with -- and between those three you'd see a pattern of neural firing that is dramatically different.
"One of the goals of cognitive science is to understand how memories are represented and manipulated by the human brain," said lead author Andrew Anderson, in an interview with Science Daily.  "This study shows that fMRI can measure brain activity with sufficient signal to identify meaningful interpersonal differences in the neural representation of complex imagined events that reflect each individual's unique experience."
And I wonder what you'd see if you tested someone who was significantly neurodivergent.  Apparently the rest of us are different enough to see on an fMRI, even when we're remembering the same sort of events; what kinds of patterns would come up for someone like my friend, who identifies a car from its license plate number and not from what it looks like or where it's parked?  What it brings home to me is that we're just taking the first steps into understanding how the brain works, and that there's a lot more variation in function between different people that we may have thought at first.
It bears keeping in mind that in some ways, we're all neurodivergent.
It reminds me of the end of the tenth and final episode of James Burke's tour de force documentary series The Day the Universe Changed, in which he makes a statement that seems to be a fitting way to end this post: "We could operate on the basis that values and standards and ethics and facts and truth all depend on what your view of the world is.  And there may be as many versions of that as there are people."
**************************************
I'm fascinated with history, and being that I also write speculative fiction, a lot of times I ponder the question of how things would be different if you changed one historical event.  The topic has been visited over and over by authors for a very long time; three early examples are Ray Bradbury's "The Sound of Thunder" (1952), Keith Roberts's Pavane (1968), and R. A. Lafferty's screamingly funny "Thus We Frustrate Charlemagne" (1967).
There are a few pivotal moments that truly merit the overused nametag of "turning points in history," where a change almost certainly would have resulted in a very, very different future.  One of these is the Battle of the Teutoburg Forest, which happened in 9 C.E., when a group of Germanic guerrilla fighters maneuvered the highly-trained, much better-armed Seventeenth, Eighteenth, and Nineteenth Roman Legions into a trap and slaughtered them, almost to the last man.  There were twenty thousand casualties on the Roman side -- amounting to half their total military forces at the time -- and only about five hundred on the Germans'.
The loss stopped Rome in its tracks, and they never again made any serious attempts to conquer lands east of the Rhine.  There's some evidence that the defeat was so profoundly demoralizing to the Emperor Augustus that it contributed to his mental decline and death five years later.  This battle -- the site of which was recently discovered and excavated by archaeologists -- is the subject of the fantastic book The Battle That Stopped Rome by Peter Wells, which looks at the evidence collected at the location, near the village of Kalkriese, as well as the historical documents describing the massacre.  This is not just a book for history buffs, though; it gives a vivid look at what life was like at the time, and paints a fascinating if grisly picture of one of the most striking David-vs.-Goliath battles ever fought.
[Note: if you purchase this book using the image/link below, part of the proceeds goes to support Skeptophilia!]