The lure of the ocean

We spent a good chunk of last week, including my birthday, in Montauk, New York, at the very eastern tip of Long Island.  I love the ocean, even when it's a cool, stormy, rainy October, and I have to do my beach runs dressed in several layers rather than my typical attire of a pair of shorts, a pair of running shoes, and damn little else.

There's something about the ocean that I find magnetic.  The crashing of the waves, keening of the gulls, smell of salt... it's magical.  There's also the overwhelming sense of power and immensity I get from it.  Staring out across the wind-tossed sea toward the misty horizon, there was literally nothing between me and the west coast of Africa except for salt water.  We sometimes see the ocean as willful and dangerous, but I think of it more as wielding a power so much greater than ours that we're simply inconsequential by comparison.  I'm reminded of the quote from H. P. Lovecraft that captures that sense of awe:

But more wonderful than the lore of old men and the lore of books is the secret lore of ocean.  Blue, green, grey, white, or black; smooth, ruffled, or mountainous; that ocean is not silent.  All my days have I watched it and listened to it, and I know it well.  At first it told to me only the plain little tales of calm beaches and near ports, but with the years it grew more friendly and spoke of other things; of things more strange and more distant in space and in time.  Sometimes at twilight the grey vapours of the horizon have parted to grant me glimpses of the ways beyond; and sometimes at night the deep waters of the sea have grown clear and phosphorescent, to grant me glimpses of the ways beneath.  And these glimpses have been as often of the ways that were and the ways that might be, as of the ways that are; for ocean is more ancient than the mountains, and freighted with the memories and the dreams of time.

The mystique has captured the human imagination for as far back as we have cultural memory, and because of it we have always linked the ocean to strange and uncanny tales.  Mermaids and sirens and water kelpies and the ningen and the kraken and the shape-shifting seal/human selkies only scratch the surface of lore that reaches into our very distant past.

It's no wonder that even some of our modern lore associates the ocean and oceanside land as being uncanny.  Shortly after our arrival, Carol mentioned the "Montauk Project" -- something I'd heard of but really didn't know much about.

Turns out, the legend is centered around Camp Hero, a state park that is at the site of the decommissioned Montauk Air Force Station.  What's left behind is distinctly eerie, and includes a decrepit radar antenna mounted on the top of a building: 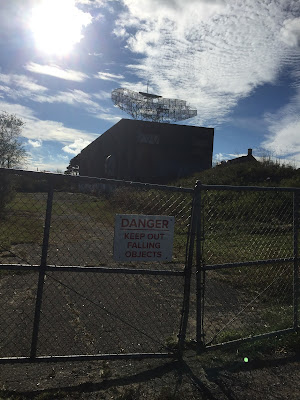 I find the sign on the fence a little puzzling.  Where do the falling objects originate, is what I wonder.  The whole place is a gentle, grassy hill with a few trees.  Do they drop objects from helicopters or something, so as to discourage trespassers?
Then there are the concrete bunkers that were the site of giant gun emplacements dating back to World War II.  They're still there, locked securely and with threatening signs discouraging visitors from trying to get inside: 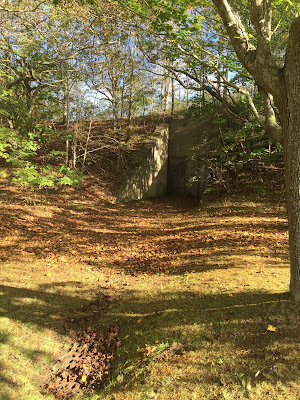 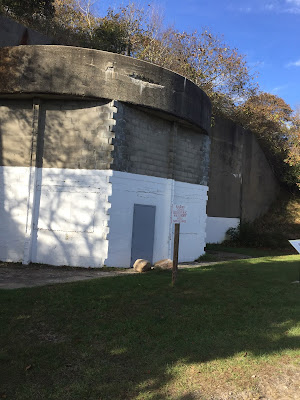 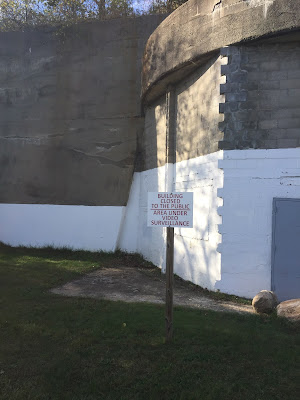 The whole place has a distinctly sinister air, and it was no surprise to me that the conspiracy theorists think the place is still being used for secret experiments, possibly involving psychological warfare, extraterrestrial weaponry, and time travel.  In fact, the series Stranger Things was inspired by Camp Hero -- the original proposed name for the series was Montauk -- but the decision was made to site it instead in the heartland of Indiana, believing that putting the evil research station trying to reach into the Upside Down in the middle of Small Town America made the series a lot more scary.  (I think they're right, actually.)

But there's no doubt that there's an uncanny feeling about Camp Hero.  I kept expecting guys to drive up in black cars and demand that I give them my phone.  That feeling wasn't improved any when, as we were leaving the area, our car got buzzed by a drone -- that followed us for about a hundred feet, then zoomed away.

The odd ambience of the Montauk area was helped considerably in 2008 when the "Montauk monster" washed ashore -- a strange-looking carcass that immediately made people think of a hideous mutant escapee from the Plum Island Animal Disease Center.  Plum Island is fifteen miles offshore and on a clear day can be seen, low on the horizon -- about all you'll ever get to see of it, because it is entirely owned by the United States government and access is severely restricted, ostensibly to prevent the spread of animal diseases (and the potential for bioweapon development by hostile nations).  As it turns out, the "Montauk monster" had nothing to do with Plum Island and almost certainly was a decomposing carcass of a raccoon, but try to convince the conspiracy theorists of that.

Anyhow, the place was well worth a visit (Montauk, not Plum Island).  We only had one afternoon of sunny weather -- by a fortunate happenstance, the afternoon we went to Camp Hero, when I took the above photos -- and the rest was mostly rainy, windy, and gray.  But it was a lovely place to spend my sixtieth birthday.  Many (well-bundled) beach walks were taken, much seafood was eaten, and much wine enjoyed.

And, happily, I didn't get abducted by the Men in Black.

But here I am, back safe and sound in my little village in upstate New York.  Much as I loved Montauk, I don't think I could live there.  For one thing, the housing prices are absurd; Carol found an advertisement for a single-wide trailer on a half-acre of land going for $845,000.  For another, the traffic is terrible, even considering that we were there during the off season.  Plus, you have to wonder what climate change and sea level rise is going to do; Long Island is basically a giant sandbar, the terminal moraine of the last (Wisconsin) Continental Glaciation, that retreated about twenty thousand years ago after having shoved unsorted rocks and sand ahead of it like a plow, leaving behind a low ridge as it retreated.  The average elevation in Montauk is about ten meters; it wouldn't take much of a rise in sea level to swamp some of the lower-lying areas.

So I'll stay right where I am, frigid winters and all.  Great place to visit, though.  Getting up in the morning and going for a run on the beach, listening to the roar of the waves and the whistling of the wind through the dune grass, is a magical experience -- looking out to sea, sensing the restless, surging immensity before you, and feeling very, very small.