The sound of a friendly voice

Given my inability to recognize faces, I've developed a number of compensatory mechanisms.  One is that I remember people by memorizing specific features; he's the guy with curly black hair, she's the woman with small oval glasses and a tattoo on her right hand.  I notice how people walk and how they carry their posture; I can sometimes recognize people I know well even if they're walking away from me, if they have a distinctive gait (which many people do, whether they realize it or not).

But for me the most important thing is the sound of their voices.  I think that may be why it took me so long to figure out I'm face blind; often, all people have to do is say a few words and I immediately know who they are, so the fact that their faces don't trigger the immediate recognition most people have doesn't hamper me as much.

It turns out that I'm not alone in relying on vocalizations for identifying who's around.  According to a paper last week in Science Advances, zebra finches have an ability to recognize their flock mates' unique vocalizations that rivals that of most humans. 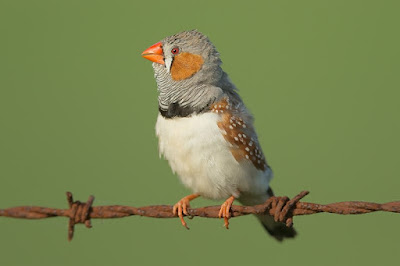 In "High-Capacity Auditory Memory for Vocal Communication in a Social Songbird," a team composed of biologists Kevin Yu, William Wood, and Frederic Theunissen, all of the University of California-Berkeley, used rewards to train a bunch of Australian zebra finches (Taeniopygia guttata) and see how far they could push the birds' ability to distinguish between the vocalizations of different members of their species.  And surprisingly -- at least to anyone who has heard the twittering cacophony of a cageful of zebra finches -- these birds could distinguish between the voices of forty or more of their friends.

Effective vocal communication often requires the listener to recognize the identity of a vocalizer, and this recognition is dependent on the listener’s ability to form auditory memories.  We tested the memory capacity of a social songbird, the zebra finch, for vocalizer identities using conditioning experiments and found that male and female zebra finches can remember a large number of vocalizers (mean, 42) based solely on the individual signatures found in their songs and distance calls.  These memories were formed within a few trials, were generalized to previously unheard renditions, and were maintained for up to a month.  A fast and high-capacity auditory memory for vocalizer identity has not been demonstrated previously in any nonhuman animals and is an important component of vocal communication in social species.

This is the first time this kind of individual vocal recognition has been demonstrated in a non-human animal.  "For animals, the ability to recognize the source and meaning of a cohort member's call requires complex mapping skills, and this is something zebra finches have clearly mastered," study co-author Theunissen said, in an interview with Science Direct.  "They have what we call a 'fusion fission' society, where they split up and then come back together.  They don't want to separate from the flock, and so, if one of them gets lost, they might call out 'Hey, Ted, we're right here.'  Or, if one of them is sitting in a nest while the other is foraging, one might call out to ask if it's safe to return to the nest...   I am really impressed by the spectacular memory abilities that zebra finches possess in order to interpret communication calls.  Previous research shows that songbirds are capable of using simple syntax to generate complex meanings and that, in many bird species, a song is learned by imitation.  It is now clear that the songbird brain is wired for vocal communication."
Social behavior is fascinating, and requires an astonishing repertoire of subtle perceptual skills to work well.  Take, for example, flocking behavior in starlings.  If you live in the United States, Canada, or western Europe, you've probably seen the flocks of black birds that swirl and move, almost in unison, as if the entire flock shared a single mind.  Scientists still don't know exactly how they manage it, but experiments have demonstrated that each bird monitors its seven nearest neighbors on either side, and determines its own flight path from those neighbors' movements.  We see that kind of thing in human crowds and in herds of cattle, of course; but the speed and degree of sophistication shown by starlings is mind-boggling.  The passage of information from one bird to the next is lightning-fast and shows almost no signal degradation (the kind of thing that happens in the game of Telephone) across the entire flock.  The result: they can move very nearly as one.  Take a look at this incredible video of a starling flock in motion:
So we aren't the only ones with fancy communication abilities.  Everywhere we look in the natural world, we see the amazing ways in which the species we share the Earth with survive, interact, and reproduce.  It can seem like a harsh, bleak world at times -- but if you want to be reminded of the astonishing beauty and wonder this planet contains, all you have to do is look around you.
**************************************
I'm fascinated with history, and being that I also write speculative fiction, a lot of times I ponder the question of how things would be different if you changed one historical event.  The topic has been visited over and over by authors for a very long time; three early examples are Ray Bradbury's "The Sound of Thunder" (1952), Keith Roberts's Pavane (1968), and R. A. Lafferty's screamingly funny "Thus We Frustrate Charlemagne" (1967).
There are a few pivotal moments that truly merit the overused nametag of "turning points in history," where a change almost certainly would have resulted in a very, very different future.  One of these is the Battle of the Teutoburg Forest, which happened in 9 C.E., when a group of Germanic guerrilla fighters maneuvered the highly-trained, much better-armed Seventeenth, Eighteenth, and Nineteenth Roman Legions into a trap and slaughtered them, almost to the last man.  There were twenty thousand casualties on the Roman side -- amounting to half their total military forces at the time -- and only about five hundred on the Germans'.
The loss stopped Rome in its tracks, and they never again made any serious attempts to conquer lands east of the Rhine.  There's some evidence that the defeat was so profoundly demoralizing to the Emperor Augustus that it contributed to his mental decline and death five years later.  This battle -- the site of which was recently discovered and excavated by archaeologists -- is the subject of the fantastic book The Battle That Stopped Rome by Peter Wells, which looks at the evidence collected at the location, near the village of Kalkriese, as well as the historical documents describing the massacre.  This is not just a book for history buffs, though; it gives a vivid look at what life was like at the time, and paints a fascinating if grisly picture of one of the most striking David-vs.-Goliath battles ever fought.
[Note: if you purchase this book using the image/link below, part of the proceeds goes to support Skeptophilia!]