The strange tale of the disappearing soldier

I've been interested in the paranormal for a long time.  It started with my uncle's scary stories about the feu follet and loup-garou, told in French, which were sufficient to frighten myself and my cousins into the near pants-wetting stage, and yet which for some reason we demanded again and again.  Later I graduated to books with titles like Twenty Terrifying True Tales of the Supernatural, Real Ghost Stories, and Bigfoot: Legend Come to Life.  I supplemented this with my fiction reading, including Lovecraft and Poe, and watching shows like Kolchak: The Night Stalker.  (With all of this, it's no wonder that I developed serious insomnia as a teenager, an ailment that continues to plague me today, forty-five years later.)

Anyhow, all of this is meant to underscore the fact that I've read a lot of supposedly true paranormal stories.  So it always is with a bit of pleasant surprise that I run into one I've never heard before -- something that happened yesterday, when a loyal reader of Skeptophilia sent me a link telling the tale of Gil Pérez, the 16th century Spanish soldier who supposedly teleported from the Philippines to Mexico City.

The story goes like this.  In October of 1593, a man showed up in the Plaza Mayor of Mexico City, disheveled and disoriented.  He was questioned by authorities, and said that moments before, he'd been on guard duty, had felt dizzy, and leaned against a wall and closed his eyes. He opened them to find himself in Plaza Mayor...

... but moments earlier, he'd been in Manila. 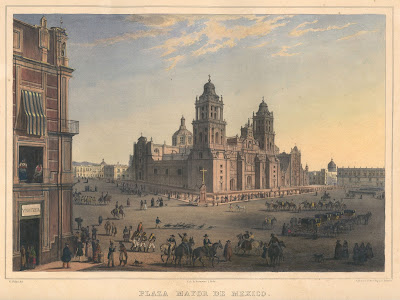 Plaza Mayor in Mexico City, where Gil Pérez appeared out of nowhere [Image is in the Public Domain]
The authorities at the time were deeply Roman Catholic, and anything like this smacked of witchcraft, so they locked him up, charging him with desertion and consorting with the devil.  Pérez said that he had no idea how he'd gotten there, but it had nothing to do with Satan -- and as proof, he said that they had just gotten word that day of the assassination of Philippine Governor Gómez Pérez Dasmariñas by Chinese pirates, and that proved that he'd just been in Manila.

Of course, back then, there was no way to verify such information quickly, so poor Pérez was confined to the jail for two months until a group that had come from Manila showed up in Mexico City.  Sure enough, one of the people in the group not only recognized Pérez, but said his uniform was the correct one for the Philippine guard -- and Pérez had indeed been there, on duty, when Dasmariñas was murdered two months earlier, but had disappeared without a trace and had not been seen since.

At that point, the authorities let Pérez go, he joined the Philippine delegation, and eventually found his way back home.  Why the charges of black magic were dropped is unknown; after all, even if he hadn't deserted, there was still the problem that he seemed to have gone halfway around the globe in seconds.  But maybe they were just as happy to make him someone else's problem.  In any case, what happened to Pérez afterwards is not recorded.

The problem, of course, is that these sort of folk legends usually have a rather unfortunate genealogy, and that certainly is true here.  The version of the story I've related above comes from a 1908 issue of Harper's Magazine, written by American folklorist Thomas Allibone Janvier.  Janvier said he got the story from a 1900 collection of Mexican tales by Luis Gonzáles Obregón, and Obregón said that he learned of it from the 1609 writings of Philippine Governor Antonio de Morga, who said that "Dasmariñas's death was known in Mexico the day it happened," although he didn't know how that could possibly be.

Others have noticed similarities between the tale and Washington Irving's story "Governor Manco and the Soldier" which appeared in Tales of the Alhambra in 1832.  So it's entirely possible that an offhand, and unsubstantiated, comment by de Morga was picked up and elaborated by Obregón, then picked up and elaborated further by Janvier, with some help along the way from Irving's (fictional) tale.

In any case, it's an intriguing story.  I'm always more fond of these open-ended tales -- the ones where everything gets tied up neatly in the end always seem to me to be too pat even to consider accepting them as real.  But this one -- Pérez's mysterious disappearance and reappearance were never explained, he vanished into obscurity afterwards, and nothing more came of it -- those are the ones that captivate interest, because that's usually the way reality works.  It's why my all-time favorite "true tale of the supernatural," the story of Nurse Black, still gives me the shudders every time I think about it.

Not, of course, that I think that the story of Pérez is true; it's simply that the more realistic a tale is, the more likely I am to be interested in it.  And after all of these years steeped in the paranormal, to find one I'd never heard of before was a lot of fun.
**************************************
I'm fascinated with history, and being that I also write speculative fiction, a lot of times I ponder the question of how things would be different if you changed one historical event.  The topic has been visited over and over by authors for a very long time; three early examples are Ray Bradbury's "The Sound of Thunder" (1952), Keith Roberts's Pavane (1968), and R. A. Lafferty's screamingly funny "Thus We Frustrate Charlemagne" (1967).
There are a few pivotal moments that truly merit the overused nametag of "turning points in history," where a change almost certainly would have resulted in a very, very different future.  One of these is the Battle of the Teutoburg Forest, which happened in 9 C.E., when a group of Germanic guerrilla fighters maneuvered the highly-trained, much better-armed Seventeenth, Eighteenth, and Nineteenth Roman Legions into a trap and slaughtered them, almost to the last man.  There were twenty thousand casualties on the Roman side -- amounting to half their total military forces at the time -- and only about five hundred on the Germans'.
The loss stopped Rome in its tracks, and they never again made any serious attempts to conquer lands east of the Rhine.  There's some evidence that the defeat was so profoundly demoralizing to the Emperor Augustus that it contributed to his mental decline and death five years later.  This battle -- the site of which was recently discovered and excavated by archaeologists -- is the subject of the fantastic book The Battle That Stopped Rome by Peter Wells, which looks at the evidence collected at the location, near the village of Kalkriese, as well as the historical documents describing the massacre.  This is not just a book for history buffs, though; it gives a vivid look at what life was like at the time, and paints a fascinating if grisly picture of one of the most striking David-vs.-Goliath battles ever fought.
[Note: if you purchase this book using the image/link below, part of the proceeds goes to support Skeptophilia!]