A signal from our neighborhood

I try to keep my rational brain engaged, but man, sometimes it's hard going.

Like when I read the story that popped up over at Scientific American last Friday.  My ears perked up at the very first line: "It's never aliens, until it is."

Written by Jonathan O'Callaghan and Lee Billings, it tells about a recent discovery made by "Breakthrough Listen," the search-for-extraterrestrial-intelligence program launched by entrepreneur Yuri Milner in 2015.  Despite scanning the skies for five years looking for something that might be a sign of alien intelligence, Breakthrough Listen hasn't found anything that couldn't be explained using ordinary astrophysics...

Maybe.  I hate to add that word, but... "rational brain engaged," and all.  There's a lot that's exciting about what they discovered, not least that the signal they found comes from Proxima Centauri -- the nearest star to the Sun, right in our own neighborhood at only 4.2 light years' distance.  (Okay, I probably shouldn't say "only."  4.2 light years is about 25,000,000,000,000 miles.  One of the fastest spacecraft ever made by humans, Voyager 2, would still take 73,000 years to reach Proxima Centauri -- if it were heading that way, which it's not.)

The proximity of the signal's source is hardly the only exciting thing about it.  After all, the universe has plenty of radio sources, and all the ones we've found so far have purely prosaic explanations.  The signal is weirdly compressed, occupying a narrow band of frequencies centering around 982 megahertz.  Interestingly, this is a frequency range that is usually fairly empty of transmissions, which is one of the reasons the signal stood out, and decreases the likelihood that it's some kind of human-made source being picked up accidentally.  "We don’t know of any natural way to compress electromagnetic energy into a single bin in frequency,” said astrophysicist Andrew Siemion, who is on the team that analyzed the signal.  "Perhaps, some as-yet-unknown exotic quirk of plasma physics could be a natural explanation for the tantalizingly concentrated radio waves, but for the moment, the only source that we know of is technological."

The "tantalizing" part is that we know for sure that Proxima Centauri has at least one Earth-like planet -- Proxima b, which is 1.2 times the size of the Earth, and orbits its star in eleven days.  (If that doesn't sound very Earth-like, remember that Proxima Centauri, as a red dwarf, is a lot less massive than the Sun, so its "Goldilocks zone" -- the band of orbital distances that are "just right" for the temperatures to allow liquid water" -- is a lot closer in, and the planets in that region travel a lot faster.)  Red dwarf stars are prone to solar flares, so some of the more pessimistic astrophysicists have suggested that the radiation flux and general turbulence would destroy any nearby planets' atmosphere, or at least shower the surface with sufficient ionizing radiation to prevent the development of complex biochemistry, let alone life.

But it's important to realize that this, too, is a surmise.  Truthfully, we don't know what's down there on Proxima b -- just that it's got a rocky surface and a temperature range that would allow for liquid oceans, rivers, and lakes.

In short, finding a suspicious radio signal from the nearest star to our own is pretty amazing, even if I *wince* *grimace* keep my rational brain engaged. 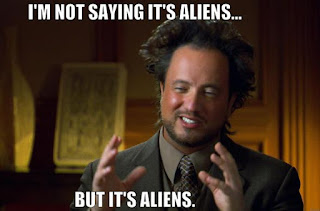 The fact is, even the scientists -- normally the most cautious of individuals -- are sounding impressed by this.  "It’s the most exciting signal that we’ve found in the Breakthrough Listen project, because we haven’t had a signal jump through this many of our filters before," said Sofia Sheikh of Pennsylvania State University, who led the team that analyzed the signal and is the lead author on an paper describing it, scheduled for publication this spring.
Honestly forces me to add that there's one bit of information about the signal that points away from it being a technosignature: unlike the signal detected at the beginning of the movie Contact, it has no internal fine structure.  “BLC1 [Breakthrough Listen Candidate 1] is, for all intents and purposes, just a tone, just one note," Siemion says.  "It has absolutely no additional features that we can discern at this point."
But even the doubters are saying it's worthy of further study.  "If it’s an ETI it must eventually be replicable, because it’s unlikely it would be a one-off,” said Shami Chatterjee, a radio astronomer at Cornell University.  "If an independent team at an independent observatory can recover the same signal, then hell yes.  I would bet money that they won’t, but I would love to be wrong."
So would a lot of us, Dr. Chatterjee.  I know we've had other strange signals before, stretching all the way back to the beginnings of radio astronomy and the discovery of incredibly rapid-fire "blinking" of a radio source discovered at Jodrell Bank by astrophysicist Jocelyn Bell Burnell in 1967.  That one also elicited the comment of "we don't know a natural process that could generate such fast oscillation" -- and the source was actually nicknamed "LGM" (Little Green Men) until Burnell showed that the signal was coming from a pulsar, a rapidly-spinning neutron star.
So it was bizarre, perhaps, but not a message from an extraterrestrial intelligence.
In any case, I'll be eagerly awaiting replication and confirmation of the discovery.  Even if it doesn't turn out to be aliens *heavy sigh* it'll probably turn out to be something interesting.  But until then... well, I guess it's premature to request transport to the mother ship, but I can still keep hoping.
****************************************
Not long ago I was discussing with a friend of mine the unfortunate tendency of North Americans and Western Europeans to judge everything based upon their own culture -- and to assume everyone else in the world sees things the same way.  (An attitude that, in my opinion, is far worse here in the United States than anywhere else, but since the majority of us here are the descendants of white Europeans, that attitude didn't come out of nowhere.)
What that means is that people like me, who live somewhere WEIRD -- white, educated, industrialized, rich, and democratic -- automatically have blinders on.  And these blinders affect everything, up to and including things like supposedly variable-controlled psychological studies, which are usually conducted by WEIRDs on WEIRDs, and so interpret results as universal when they might well be culturally-dependent.
This is the topic of a wonderful new book by anthropologist Joseph Henrich called The WEIRDest People in the World: How the West Became Psychologically Peculiar and Particularly Prosperous.  It's a fascinating lens into a culture that has become so dominant on the world stage that many people within it staunchly believe it's quantifiably the best one -- and some act as if it's the only one.  It's an eye-opener, and will make you reconsider a lot of your baseline assumptions about what humans are and the ways we see the world -- of which science historian James Burke rightly said, "there are as many different versions of that as there are people."
[Note:  If you purchase this book using the image/link below, part of the proceeds goes to support Skeptophilia!]