Regular readers of Skeptophilia will recognize the name Andrew Butters, my fellow blogger over at the wonderful Potato Chip Math.  Andrew and I are so much alike that mutual friends suspect we were twins separated at birth.  Besides both being bloggers, we are both novelists, were both physics majors (degrees we completed despite the fact that, to put it bluntly, we both kind of sucked at it), both have seriously demented senses of humor, and both love weird and arcane science stuff.

It's this last commonality that has earned Andrew mention in Skeptophilia more than once, because he frequently passes along science news articles he runs across, and a good many of these have ended up here.  And today I once again give him my tip o' the hat for sending me a link to a story from Science about some recent research on the topic of fulgurites.

What's a fulgurite, you might ask?  The -ite ending might clue you in to surmise correctly that we're talking about some sort of mineral.  Fulgurite isn't just some ordinary garden-variety rock, though.  Fulgurites are formed when lightning strikes the ground, discharging into soil that has a high mineral (and low organic matter) content.  When this occurs, an electrical potential difference of as much as a hundred million volts is bridged.

This is what physicists call "a hell of a big short circuit."  Lightning releases all the energy stored in that potential in a fraction of a second.  The column of air through which the current passes superheats, generating the light flash and booming shock wave we associate with a nearby strike.

But it doesn't expend all its stored energy on its passage through the air.  As the current dissipates in the ground, it generates so much heat that it melts the minerals in the soil, when then fuse together into a twisted tube of glass that charts the pattern the lightning bolt took once it struck. 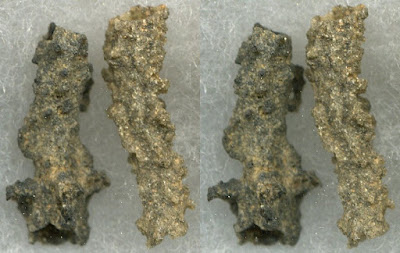 The topic comes up because the article Andrew sent me a couple of days ago is about a geologist, Jonathan Castro, at the Johannes Gutenberg University of Mainz, who came up with the novel idea of using fulgurites to chart ancient climate trends.  Fulgurites are often found near mountaintops -- the peak of Mount Shasta, for example, is pitted with them, the rock blackened and scarred from the hundreds of hits the mountain has taken.  Castro found that when a fulgurite forms, it evaporates all the water in the glass chunk formed; the fulgurite then begins to take up water again at a slow and steady rate, so the water content in the pores of the glass can give you a good idea of when it formed.

Not only does this serve to date lightning strike frequency -- and thus give data about the paleoclimate -- it also can be used to time the advance and retreat of glaciers.  A strike onto a thick layer of ice would cause shock cracks and melting, but in short order there'd be no trace left of it.  Once the glacier retreats and exposes bare rock surfaces, though, any strikes would cause the formation of long-lasting fulgurites.

Reading about this sort of thing always makes me realize something I never thought about during the years of my abortive attempt to launch a career in scientific research.  Research depends not only on technical know-how and a solid background in your subject, it depends hugely on creativity -- the capacity for coming up with a way of tackling the question at hand in a novel way.  When I read about Castro's use of fulgurites to date the movement of glaciers, my first thought was, "I never would have thought of doing that."  It's not just that I'm not a geologist -- and actually, because of growing up around my rockhound dad, I knew about fulgurites before reading the article -- I just can't imagine being scientifically creative enough to put fulgurites together with glaciers together with water uptake rates by glass and come up with a new lens on the climate ten-thousand-odd years ago.

But I have the utmost respect for anyone whose brain does work that way.  When Andrew sent me the link, my response was, "Okay, that is just cool."  And it once more points at something I've said many times before; if you're interested in science -- even if you were kind of a washout as a physics student -- you'll never, ever be bored.