Get thee behind me, Rover

If you live in Japan, own a dog, and have more money than sense, I've got good news for you: you can pay ¥ 31,000 (about US $297) to have a Shinto priest perform an exorcism on your canine companion.

I'm not making this up.  According to an article by E. S. Huffman over at UpRoxx, the D+ Spa in Kagoshima Prefecture is offering a special deal wherein you can come over with Fido, and a certified Shinto priest from the nearby Shingariyu Shrine will get rid of whatever evil spirits your dog has in attendance.

"Seven-year-old, 10-year-old, and 13-year-old dogs need to be careful of their health, as it’s easier in those years for them to get diseases of aging," the D+ website explains.  After all, it couldn't be because by the time dogs get to be ten years old, they're moving into the age bracket euphemistically known as "getting up there in years."

On the other hand, if creaky joints, bad eyesight, and wrinkles are caused by evil spirits that you could actually potentially get rid of, that'd be good news for People Of A Certain Age.  Like myself.  Unfortunately, however, D+ doesn't offer exorcisms for humans yet, only dogs.  And if the whole thing brings up mental images of Linda Blair puking up pea soup all over the place, not to worry; the exorcism ritual only lasts thirty minutes, is apparently calm and peaceful, and afterwards the newly-cleansed dogs get to go for a swim in a dogs-only pool.  Then, according to the website, they "are reunited with their owners for a relaxing meal and champagne."

Me, I'm not so sure it's a good idea to give a dog champagne.  But maybe the bubbles keep the evil spirits from returning, I dunno. 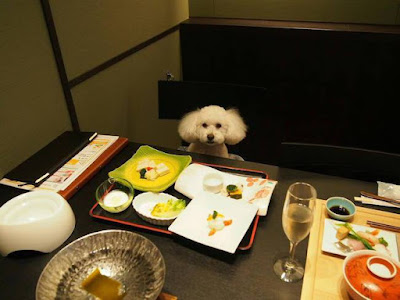 Actual photo from the D+ website of a poodle, settling in for a nice post-exorcism nosh
What comes to my mind, besides "Are you people nuts?  Or what?", is that in my experience all dogs have weird, quirky habits, so if you're attributing canine oddities to evil spirits, then every domesticated dog I've ever met must be possessed.  In my long years of dog ownership, I've known dogs who:
I sort of doubt that any of this could be fixed by exorcism.  Myself, I've always thought that domestication just makes animals act weird.  In order for a formerly-wild animal to cohabit successfully with humans, it must kind of screw up the mental circuitry on some level.

On the other hand, if you want my vote for a species that really could use some intervention, evil-spirit-wise, I'd suggest looking at cats.  On a recent visit to a friend's house, I met a cat whose preferred mode of expressing affection is to jump on the top of the chair you're sitting in and bite a chunk out of your scalp.  Another friend has a cat who likes to climb into your lap, reach up with both paws, and attempt to give you a nipple piercing right through your shirt.

You have to wonder what a Shinto priest could do about that.

Anyhow, if you're ever in Japan with your dog, consider whether a family outing for a canine exorcism might be right for you.  As for me, I need to sign off here so I can go let my dog out, so she can go stand at the end of our dock and bark at her own reflection in the pond.
*************************************
I've always had a fascination with how our brains work, part of which comes from the fact that we've only begun to understand it.  My dear friend and mentor, Dr. Rita Calvo, professor emeritus of human genetics at Cornell University, put it this way.  "If I were going into biology now, I'd study neuroscience.  We're at the point in neuroscience now that we were in genetics in 1900 -- we know it works, we can see some of how it works, but we know very little in detail and almost nothing about the underlying mechanisms involved.  The twentieth century was the century of the gene; the twenty-first will be the century of the brain."
We've made some progress in recent years toward comprehending the inner workings of the organ that allows us to comprehend anything at all.  And if, like me, you are captivated by the idea, you have to read this week's Skeptophilia book recommendation: neuroscientist Lisa Feldman Barrett's brilliant Seven and a Half Lessons About the Brain.
In laypersons' terms, Barrett explains what we currently know about how we think, feel, remember, learn, and experience the world.  It's a wonderful, surprising, and sometimes funny exploration of our own inner workings, and is sure to interest anyone who would like to know more about the mysterious, wonderful blob between our ears.
[Note: if you purchase this book using the image/link below, part of the proceeds goes to support Skeptophilia!]