In yesterday's post, we looked at a peculiar, as-yet unexplained radio transmission from Proxima Centauri, but there's an awful lot we don't understand right here in our own Solar System.

Okay, most of it's not as exciting as a candidate for a signal from an extraterrestrial intelligence, although it must be mentioned that just last week scientists, using data from the Cassini probe, suggested that the chemistry of the ocean beneath the frozen surface of Enceladus (the sixth-largest moon of Saturn) shows signs of a complex chemistry that might be indicative of the presence of life.  If there's anything alive there, it's almost certainly nothing larger than microbes, but at this point, I'll take it.  If life can develop on a frigid, icy world like Enceladus, it further bolsters my conviction that life must be plentiful in the universe.

But leaving behind the topic of extraterrestrial life for a bit (face it, this is me writing this, it's bound to come up again soon), there's strange enough stuff to investigate right here and right now without postulating something we honestly don't have any hard evidence for.  Take, for example, the odd behavior of the storm on Neptune that was described in a press release from NASA last week.

To understand its oddity, a brief physics lesson.  Forgive me if this is familiar ground, but to see why the Neptunian observations are so weird, the average layperson might need some background explanation.

There's a phenomenon that occurs on planets' surfaces called the Coriolis effect.  The Coriolis effect, named after nineteenth century French physicist Gaspard Gustave de Coriolis, is a "fictitious force," a bit like "centrifugal force," that only occurs because we're in a non-inertial reference frame -- in this case, sitting on a spinning ball rather than standing still.  The simpler situation of centrifugal force not being a real force can be illustrated if you've ever ridden the Gravitron at a carnival, the ride where you stand with your back against the wall in a spinning cylinder, and you feel like you're getting pushed back and held against the wall.  The reality is that your body is just trying to obey Newton's First Law, of moving in a straight line at a uniform velocity, but you're being prevented from doing so by the rigid wall pushing you in toward the center of the cylinder.  In other words, the actual force is pointing inward (a "centripetal force"); you only feel like there's an outward-pointing force because you're moving in a rotating, non-inertial reference frame.

In the slightly more complicated situation of the Coriolis effect, here it manifests as an apparent deflection of the path of an object traveling from a straight line with respect to someone on the surface of the Earth.  In reality, of course, the object is traveling in a straight line, and you'd see that if you watched it from a stationary point in space; it's the observer, and the surface of the Earth (s)he is standing on, that isn't.  The result is that moving objects appear to be deflected clockwise in the Northern Hemisphere and counterclockwise in the Southern, which explains the rotation of hurricanes but does not account for water spiraling down a drain (drains are way too small for the Coriolis "force" to have a measurable effect; the swirl of water going down a drain is due to the shape of the basin and water's movement left over from when it was poured).

The Coriolis effect.  The object in question is moving from the upper left to the lower right.  The blue line shows its path as seen in an inertial reference frame (i.e. from space); the red curve shows its apparent position relative to a fixed point on the Earth's surface.  Notice that this gives the object a seemingly rightward (clockwise) deflection from the point of view of someone watching it from an earthbound perspective.  [GIF courtesy of Georgia State University]

The reason all this twisty stuff comes up is an observation of a storm on the planet Neptune.  Neptune is a gas giant, a planet large enough and cold enough that its atmosphere comprises a significant portion of the radius of the planet (rather than just a thin shell like ours).  The core is probably rocky, but we honestly don't know much about it, because the place is basically one enormously thick layer of clouds.

And it's turbulent.  The storms on Neptune dwarf the ones here on Earth; the one in question, which looks like a dark spot in the bright blue surface of the tops of the clouds, has a diameter larger than the Atlantic Ocean.  But even on Neptune, the laws of physics are strictly enforced, and when astronomers saw the massive hurricane heading toward the planet's equator -- where the Coriolis effect drops to zero, then picks up in the other direction in the Southern Hemisphere -- they thought the reversal of deflection would shear it to bits. 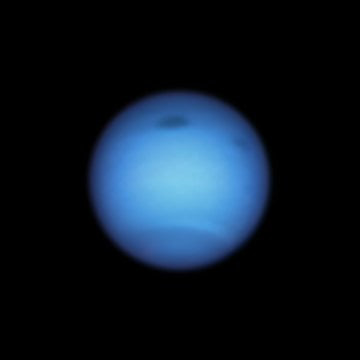 But that didn't happen.  The storm appeared headed southward toward certain destruction, but then curved around and started heading north again.  Even weirder, it split off a smaller storm ("smaller" at 3,900 kilometers in diameter) which can be seen in the upper right of the planet's disc.  How it did that, and whether that had anything to do with the main storm's unexpected turn, is unknown.

"It was really exciting to see this one act like it's supposed to act and then all of a sudden it just stops and swings back," said Michael Wong, astrophysicist at the University of California-Berkeley, who led the team that made the discovery.  "That was surprising...  When I first saw the small spot, I thought the bigger one was being disrupted.  I didn't think another vortex was forming because the small one is farther towards the equator.  So it's within this unstable region.  But we can't prove the two are related.  It remains a complete mystery.  It was also in January that the dark vortex stopped its motion and started moving northward again.  Maybe by shedding that fragment, that was enough to stop it from moving towards the equator."

But the truth is, they really don't know for sure what caused the storm's odd trajectory.  It doesn't seem to be obeying the pattern we'd expect of a storm track -- although even here on Earth, predicting the path of a hurricane is an inexact science at best.  What it illustrates is that even in our own astronomical back yard, there are phenomena we're still working to explain.
Think about what kind of bizarre stuff we'll find when we are finally able to look farther afield.  What weird weather, geology, and oceanography might occur on planets around other stars -- planets that might have very elliptical orbits, rapid revolutions close in to the host star, or be spinning much faster than the Earth -- or maybe is tidally locked, so that the same side of the planet faces the star all the time?  I think we're in for some surprises, wherever we look.
Kind of boggles the mind, doesn't it?
****************************************
Not long ago I was discussing with a friend of mine the unfortunate tendency of North Americans and Western Europeans to judge everything based upon their own culture -- and to assume everyone else in the world sees things the same way.  (An attitude that, in my opinion, is far worse here in the United States than anywhere else, but since the majority of us here are the descendants of white Europeans, that attitude didn't come out of nowhere.)
What that means is that people like me, who live somewhere WEIRD -- white, educated, industrialized, rich, and democratic -- automatically have blinders on.  And these blinders affect everything, up to and including things like supposedly variable-controlled psychological studies, which are usually conducted by WEIRDs on WEIRDs, and so interpret results as universal when they might well be culturally-dependent.
This is the topic of a wonderful new book by anthropologist Joseph Henrich called The WEIRDest People in the World: How the West Became Psychologically Peculiar and Particularly Prosperous.  It's a fascinating lens into a culture that has become so dominant on the world stage that many people within it staunchly believe it's quantifiably the best one -- and some act as if it's the only one.  It's an eye-opener, and will make you reconsider a lot of your baseline assumptions about what humans are and the ways we see the world -- of which science historian James Burke rightly said, "there are as many different versions of that as there are people."
[Note:  If you purchase this book using the image/link below, part of the proceeds goes to support Skeptophilia!]