Music, math, and the mind

I've been interested for a long time in the connection between musical and mathematical aptitude.  Part of this is my background as an educator; part is that I personally have been fascinated both with music and mathematics for as long as I can remember.  I play three instruments -- flute, piano, and (I shit you not) bagpipes -- and am largely self-taught on all three, from a combination of parents who thought that music lessons and/or participation in band were a waste of time and a nearly irresistible compulsion to make music despite that.

People like myself who enjoy both disciplines, and who would love to see music and arts education in schools emphasized and expanded, often bring up famous figures who were both musicians and adepts in the fields that are encompassed by the acronym STEM (science, technology, engineering, and mathematics).  Albert Einstein usually comes up, and his quote "I have always considered myself first and foremost a violinist" often gets mentioned. 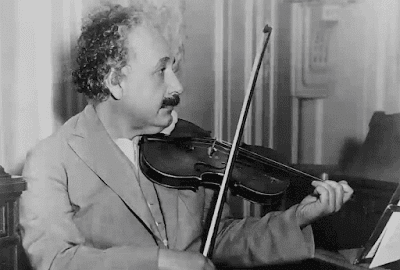 My favorite example of a musician/scientist, however, is Brian May, lead guitarist for the band Queen, who holds a Ph.D. in astrophysics from London College.  His scientific background sometimes makes an appearance in songs he wrote for the band -- most notably the beautiful and heartbreaking "'39," which is about an astronaut leaving in search of new planets to colonize in the "year of '39," and returning with news of his discoveries, also in the year of '39 -- but because of the relativistic time dilation effect of near-light-speed travel, when he arrives home it's not a few months later, it's a hundred years later.  The chorus is devastatingly bittersweet:

Don't you hear my call, though you're many years away,
Don't you hear me calling you?
Write your letters in the sand, for the day I'll take your hand
In the land that our grandchildren knew.

You can listen to the entire thing here:

So anyhow, I've been biased for a long time to believe there's a connection between musical aptitude and mathematical and/or scientific aptitude.  But as I've point out more than once, the plural of anecdote isn't data, and it'd take more than throwing around a famous name or two to convince the powers-that-be in education of the importance of music in schools.

Which is why the paper last week in the Journal of Research in Music Education is so important.  In "Multilevel Models of the Relationship Between Music Achievement and Reading and Math Achievement," by Martin Bergee and Kevin Weingarten of the University of Kansas, we read about a study that should be a model for careful analysis and control of variables, and which demonstrates beyond doubt that the link exists -- and is almost certainly causational.

What's striking about this is that Bergee set about doing the study because he was convinced that the opposite was true -- that there was no correlation between music and math aptitude beyond what could be explained by other factors (i.e. socioeconomic status, the degree of education of the parents, the emphasis on arts and music education by the school district, and so on).  But even accounting for these factors, the correlation was unmistakable.

"Based on the findings, the point we tried to make is that there might be, and probably are, general learning processes that underlie all academic achievement, no matter what the area is," Bergee said, in an interview with Science Direct.  "Music achievement, math achievement, reading achievement -- there are probably more generalized processes of the mind that are brought to bear on any of those areas.  Therefore, if your goal is to educate the person -- to develop the person's mind -- then you need to educate the whole person.  In other words, learning may not be as modular as it is often thought to be."

The study has unequivocal implications on how school districts allocate funds -- and why the "preserve STEM at all costs, cut art/music if necessary" approach is so completely wrong-headed.  "If you want a young person's -- or any person's -- mind to develop, then you need to develop it in all ways it can be developed," Bergee said.  "You can't sacrifice some modes of learning to other modes of learning for whatever reason, be it financial or societal."

As conclusive as it was, it would be unwarrantedly optimistic to think that this research will impel school boards to rethink their budget decisions apropos of music education.  The educational establishment is notoriously prone to ignoring current research in favor of "we've always done it this way and it would be too expensive to change course."  (My favorite example is the ridiculous approach in the United States to teaching children a second language.  Such instruction usually begins in seventh or eighth grade, even though it's been known for years that the window of neural plasticity for language learning closes significantly after age six or seven.  In the words of a former student of mine, "They wait to start teaching you languages until your brain has become really bad at learning them.")

But at least we now have some rigorous data to support the claim that music education is as important as the sacrosanct STEM.  Music lessons are not (as my mom claimed) "a waste of time and money."  Teaching music and the arts in schools is critical for developing children's intellects as deeply and thoroughly as possible -- which, after all, should be the ultimate goal of education.