I remember a couple of years ago noticing something odd.  While eating breakfast on work days, I'd finish, and always give a quick glance up at the digital clock that sits on the counter.  Three times in a row, the clock said 6:19.

I know there's a perfectly rational explanation; I'm a total creature of habit, and I did the same series of actions in the same order every single work morning, so the fact that I finished breakfast three days in a row at exactly the same time only points up the fact that I need to relax a little.  But once I noticed the (seeming) pattern, I kept checking each morning.  And there were other days when I finished at exactly 6:19.  After a few weeks of this, it was becoming a bit of an obsession. 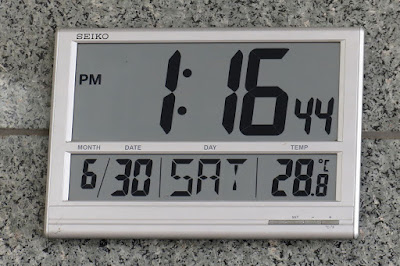 [Image licensed under the Creative Commons Mk2010, LED digital wall clock (Seiko), CC BY-SA 3.0]
So being a rationalist, as well as needing a hobby, I started to keep track.  And very quickly a few things became obvious:
So I had fallen for dart-thrower's bias, the perfectly natural human tendency to notice the unusual, and to give it more weight in our attention and memory.  The point is, once you start noticing this stuff, you're more likely to notice it again, and to overestimate the number of times such coincidences occur.
The whole thing comes up because of a link sent to me by a loyal reader of Skeptophilia called, "Angel Numbers Guide: Why You Keep Seeing Angel Number Sequences."  I'm not going to recommend your going to the site, because it's pretty obviously clickbait, but I thought the content was interesting from the standpoint of our determination that the patterns we notice mean something.
The site is an attempt to convince us that when we see certain numbers over and over, it's an angel attempting to give us a message.  If you notice the number 1212, for example, this is an angel encouraging us to "release our fears and apprehensions, and get on with pursuing our passions and purpose... [asking you to] stay on a positive path and to use your natural skills, talents, and abilities to their utmost for the benefit of yourself and others."
Which is good advice without all of the woo-woo trappings.
Some numbers apparently appeal not only to our desire for meaningful patterns, but for being special.  If you see 999 everywhere, "you are amongst an elite few... 999 is sometimes confrontative, and literally means, 'Get to work on your priorities.  Now.  No more procrastinating, no more excuses or worries.  Get to work now."
Since a lot of the "angel numbers" involve repeated digits, I had to check to see what 666 means.  I was hoping it would say something like, "If you see 666, you are about to be dragged screaming into the maw of hell."
But no. 666 apparently is "a sign from the angels that it's time to wake up to your higher spiritual truth."  Which is not only boring, but sounds like it could come from a talk by Deepak Chopra.
So the whole thing turns out to be interesting mostly from the standpoint of our desperation to impose some sense on the chaos of life.  Because face it; a lot of what does happen is simply random noise, a conclusion that is a bit of a downer.  I suspect that many religions give solace precisely because they ascribe meaning to everything; the Bible, after all, says that even a sparrow doesn't fall from the sky without the hand of God being involved.
Me, I think it's more likely that a lot of stuff (including birds dying) happens for no particularly identifiable or relevant reason.  Science can explain at least some of the proximal causes, but as far as ultimate causes?  I think we're thrown back on the not very satisfying non-explanation of the universe simply being a chaotic place.  I understand the appeal of it all having meaning and purpose, but it seems to me that most of what occurs is no more interesting than my finishing breakfast at 6:19.
*************************************
I've always had a fascination with how our brains work, part of which comes from the fact that we've only begun to understand it.  My dear friend and mentor, Dr. Rita Calvo, professor emeritus of human genetics at Cornell University, put it this way.  "If I were going into biology now, I'd study neuroscience.  We're at the point in neuroscience now that we were in genetics in 1900 -- we know it works, we can see some of how it works, but we know very little in detail and almost nothing about the underlying mechanisms involved.  The twentieth century was the century of the gene; the twenty-first will be the century of the brain."
We've made some progress in recent years toward comprehending the inner workings of the organ that allows us to comprehend anything at all.  And if, like me, you are captivated by the idea, you have to read this week's Skeptophilia book recommendation: neuroscientist Lisa Feldman Barrett's brilliant Seven and a Half Lessons About the Brain.
In laypersons' terms, Barrett explains what we currently know about how we think, feel, remember, learn, and experience the world.  It's a wonderful, surprising, and sometimes funny exploration of our own inner workings, and is sure to interest anyone who would like to know more about the mysterious, wonderful blob between our ears.
[Note: if you purchase this book using the image/link below, part of the proceeds goes to support Skeptophilia!]