Last night I had a good bit of trouble sleeping.

This isn't all that uncommon.  I've had issues with insomnia ever since I was a teenager.  Sometimes the issue is physical restlessness; sometimes it's anxiety, either over something real or something imagined.

At least its timing was reasonably good, being that yesterday was Christmas.  What I wonder is why it couldn't choose a song that I don't hate.  I'm not one of those Bah-Humbug curmudgeons who dislikes all Christmas music; some of it I actually rather enjoy.

I'm of the opinion, however, that listening to "Feliz Navidad" over and over would have been ruled out as a torture device by Tómas de Torquemada on the basis of being too cruel.

Leaving aside my brain's questionable choice of which song to holler at me, a more interesting question is how to get rid of it once it's stuck there.  I've found that for me, the best thing is to replace it with something less objectionable, which in this case would have been just about anything.  There are a couple of pieces of sedate classical music and a slow Irish waltz or two that I can usually use to shove away whatever gawdawful song is on repeat in my skull, if I concentrate on running them mentally in a deliberate fashion.  It eventually worked, but it did take much longer than usual.

José Feliciano is nothing if not persistent.

The reason all of this comes up -- besides my Christmas-music-based bout of insomnia -- is some research out of a team from the University of Colorado - Boulder and the University of Texas - Austin that appeared in Nature Communications this month.  Entitled, "Changes to Information in Working Memory Depend on Distinct Removal Operations," by Hyojeong Kim, Harry Smolker, Louisa Smith, Marie Banich, and Jarrod Lewis-Peacock, this research shows that the kind of deliberate pushing away I use to purge bad music from my brain works in a lot of other situations as well -- and may have applications in boosting creativity and in relieving anxiety, obsessive-compulsive disorder, and PTSD.

What they did was to put a thought into their test subjects' heads -- a photograph of a face, a bowl of fruit, or an outdoor scene -- instructed them to think about it for four seconds, and then to deliberately stop thinking about it, all the while watching what happens to their neural systems using an fMRI machine.  Ceasing to think about something without replacing it with something else is remarkably hard; it brings to mind my dad's recommended cure for hiccups, which is to run around the house three times without thinking of an elephant.

The three different sorts of things they asked the subjects to try -- to replace the thought with something else, to clear all thoughts completely, or to suppress that one thought without replacing it -- all resulted in different patterns on the fMRI.  "Replace" and "clear" both worked fairly rapidly, but both left a trace of the original thought pattern behind -- a "ghost image," as the researchers called it.  "Suppress" took longer, and subjects described it as being more difficult, but once accomplished, the original pattern had faded completely.

"We found that if you really want a new idea to come into your mind, you need to deliberately force yourself to stop thinking about the old one," said study co-author Marie Banich, in a press release from the University of Colorado.

Co-author Jarrod Lewis-Peacock concurred.  "Once we’re done using that information to answer an email or address some problem, we need to let it go so it doesn’t clog up our mental resources to do the next thing." 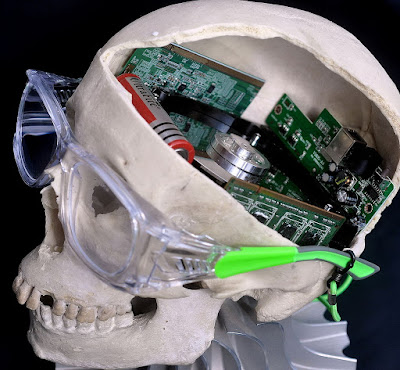 This explains another phenomenon I've noted; that when I'm trying to think of something I've forgotten, or come up with a solution to a problem that's stumping me, it often helps if I deliberately set it aside.  Just a couple of days ago, I was working on my fiction work-in-progress, and found I'd written myself into a corner.  I'd created a situation that called for some as-yet-undreamed-of plot twist, or else rewriting a big section of it to eliminate the necessity (something I didn't want to do).  After basically beating it with a stick for an hour or two, I gave up in frustration, and went to clean up my garage.

And while working on this chore, and not thinking about my writing at all, a clever solution to the problem simply popped into my head, seemingly out of nowhere.

This is far from the first time this sort of thing has happened to me, and the Kim et al. paper at least gives a first-order approximation as to how this occurs.  Pushing aside what you're thinking about, either consciously and deliberately or else (as in my garage-cleaning example) by replacing it with something unrelated, clears the cognitive thought patterns and gives your brain room to innovate.

Now, where exactly the creative solution comes from is another matter entirely.  I've described before how often my ideas for writing seem to originate from outside my own head.  I don't subscribe to a belief in any sort of Jungian collective unconscious, but sometimes it sure feels that way.

In any case, all of this gives us a lens into how to make our own thought processes more efficient -- in cases of clogged creativity as well as situations where errant thoughts are themselves causing problems, as in PTSD.  What the Kim et al. research suggests is that the first thing to work on is consciously purging the brain in order to create space for more positive and beneficial thoughts.

Okay, so maybe I am a Bah-Humbug curmudgeon.  God bless us every one anyhow, I suppose.

****************************************
Not long ago I was discussing with a friend of mine the unfortunate tendency of North Americans and Western Europeans to judge everything based upon their own culture -- and to assume everyone else in the world sees things the same way.  (An attitude that, in my opinion, is far worse here in the United States than anywhere else, but since the majority of us here are the descendants of white Europeans, that attitude didn't come out of nowhere.)
What that means is that people like me, who live somewhere WEIRD -- white, educated, industrialized, rich, and democratic -- automatically have blinders on.  And these blinders affect everything, up to and including things like supposedly variable-controlled psychological studies, which are usually conducted by WEIRDs on WEIRDs, and so interpret results as universal when they might well be culturally-dependent.
This is the topic of a wonderful new book by anthropologist Joseph Henrich called The WEIRDest People in the World: How the West Became Psychologically Peculiar and Particularly Prosperous.  It's a fascinating lens into a culture that has become so dominant on the world stage that many people within it staunchly believe it's quantifiably the best one -- and some act as if it's the only one.  It's an eye-opener, and will make you reconsider a lot of your baseline assumptions about what humans are and the ways we see the world -- of which science historian James Burke rightly said, "there are as many different versions of that as there are people."
[Note:  If you purchase this book using the image/link below, part of the proceeds goes to support Skeptophilia!]