Before I run a race, I have to give myself a serious pep talk, because I'm the kind of person who always assumes the worst.  Although I've run many races without mishap, there's always this haunting thought in the back of my head that this is going to be the one where I faint or puke or fall down and tear both of my Achilles tendons or get run over by a car.

Just a cockeyed optimist, that's me. 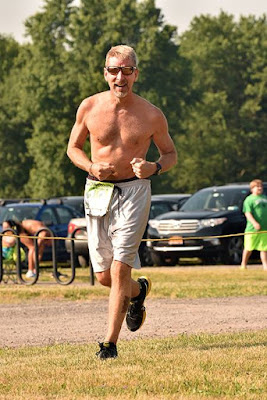 Me, attempting not to die.  In this case, there was actually a significant chance of it, because it was about 93 F and the humidity usually found in a sauna.  More than one person collapsed on the course.  I made it to the finish line.  Then I collapsed.
So it was with great interest that I read an article in the Journal of Sport and Exercise Psychology a friend sent me, suggesting that my errant and morbid brain might actually be onto something.  In a paper entitled "He Dies, He Scores: Evidence that Reminders of Death Motivate Improved Performance in Basketball," Colin A. Zestcott, Uri Lifshin, Peter Helm, and Jeff Greenberg of the University of Arizona's Department of Psychology have shown that thinking about death prior to a competition may actually make an athlete perform better.  The authors write:

This research applied insights from terror management theory (TMT; Greenberg, Pyszczynski, & Solomon, 1986) to the world of sport.  According to TMT, self-esteem buffers against the potential for death anxiety.  Because sport allows people to attain self-esteem, reminders of death may improve performance in sport.  In Study 1, a mortality salience induction led to improved performance in a “one-on-one” basketball game.  In Study 2, a subtle death prime led to higher scores on a basketball shooting task, which was associated with increased task related self-esteem.  These results may promote our understanding of sport and provide a novel potential way to improve athletic performance.

So the time-honored method of coaches telling their players to keep their mind on the game might not have as much of a beneficial effect as if they said, "Have you pondered your own mortality lately?"

Author Lifshin explains why he thinks they got the results they did.  "Your subconscious tries to find ways to defeat death, to make death not a problem, and the solution is self-esteem.  Self-esteem gives you a feeling that you're part of something bigger, that you have a chance for immortality, that you have meaning, that you're not just a sack of meat...  When we're threatened with death, we're motivated to regain that protective sense of self-esteem, and when you like basketball and you're out on the basketball court, winning and performing well is the ultimate way to gain self-esteem."

Apparently even a subtle suggestion worked.  When Lifshin wore a shirt with a human skull on it while working with test subjects, "Participants who saw the shirt outperformed those who did not by approximately 30 percent.  They also attempted more shots — an average of 11.85 per minute versus an average of 8.33 by those who did not see the shirt...  They took more shots, better shots, and they hustled more and ran faster."

So maybe my incessant focus on the worst-case scenario is a good thing.  And whether or not my attitude has anything to do with it, I've been pretty pleased with my running performance lately, especially since just last week I finished a 400-mile virtual run, a fundraiser for the American Foundation for Suicide Prevention, in 88 days.  Unfortunately, because of COVID, I've been mostly running alone, so no one was around to give me a high five afterward except my dog, and he would probably have been equally enthusiastic if all I'd done was walk to the end of the driveway and back.

Even if pessimism may make your athletic performance better, I can't say it's a pleasant attitude to have, and I've tried to adopt a sunnier outlook whenever possible.  I'm not sure my natural bent will be that easy to eradicate, however, and given the research by Zestcott et al., maybe it's better just to embrace it and run each race as if it'll be my last.