Requiem for an old friend

My fascination for astronomy started a long time ago.  I started learning the constellations when I was about six, and received a telescope as a Christmas present from my grandmother when I was eight.  Just about any clear night it was a good bet I'd be out in my front yard looking up at the stars, wondering what it was like out there, thinking about what other planets might host life -- and if somewhere there was a little alien boy looking back my way and wondering the same thing.

It was about that time that I found out about the Arecibo Observatory in Puerto Rico.  One of the many astronomy books I had called the three-hundred-meter radio dish "our eye on the sky" -- it was my first introduction both to the idea that not all telescopes looked like the little tube with lenses on a stand that I owned, and that it was possible to "see" the sky using wavelengths of light that were invisible to human eyes.  Also, if you were to view the sky with a radio telescope (or in microwaves, or x-rays, or ultraviolet light, or whatever) you would see a very different set of features than the familiar twinkling points of light set against a black background.

In the microwave region, for example, you'd see light coming from basically all directions at once -- the "three degree microwave background radiation" which Arno Penzias and Robert Wilson discovered -- and which is one of our most persuasive pieces of evidence of the Big Bang.  (This discovery was made not at Arecibo but at the Holmdel Horn Antenna in New Jersey.)  X-ray astronomy is how black holes were discovered, and we know about the terrifyingly powerful Wolf-Rayet stars because of telescopes sensitive to the ultraviolet region of the spectrum.

Arecibo, though, was particularly evocative, not only for its function but because of its site, in a limestone sinkhole in the jungles of northern Puerto Rico.  Add to this its role in searching for signs of extraterrestrial life, and you have a combination sure to capture the imagination.  Because of this it made a number of appearances in science fiction, such as the 1994 episode of The X Files called "Little Green Men," and most notably, the amazing 1997 movie Contact, which remains my number-one favorite movie ever, not only for the story but because of a tour de force performance by Jodie Foster as the indomitable astronomer Ellie Arroway. 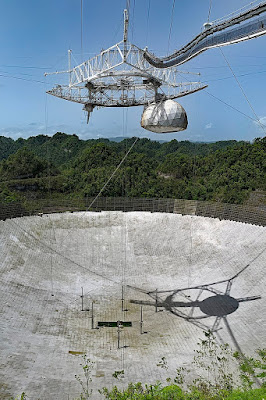 So it was with considerable sadness that I found out a couple of weeks ago that Arecibo was being permanently dismantled.  Earlier this year, a pair of cable breaks ripped gashes in the dish, and it seemed like the venerable telescope was unrepairable.  As if to confirm that, just two days ago the nine-hundred-ton equipment platform collapsed, falling almost two hundred meters and destroying the entire center of the telescope.

"When we looked outside the control room, we started to see the eventual downfall of the observatory," observatory director Ángel Vázquez said.  "After the breakage of two cables earlier this year, strands of the remaining three cables had been unraveling in recent days, increasing the strain.  And because two of the support towers maintained tension as the collapse occurred, some of the falling equipment was yanked across the side of the dish rather than falling straight down through its focal point...  This whole process took thirty seconds, and an icon in radio astronomy was done."

Vázquez isn't the only one to feel its loss deeply.  "While life will continue, something powerful and profoundly wonderful is gone," said astronomer Seth Shostak, whose work with SETI (the Search for Extraterrestrial Intelligence) was a good part of the inspiration for Contact.

I understand the sentiment.  The whole thing makes me feel something like grief.  Arecibo has been an inspiration to me since I was a child, and its destruction is like losing an old friend.  I know there are other, and more powerful, telescopes out there, but this one seemed to me to be a symbol of our search for something beyond ourselves, for unraveling the secrets of the universe while still right here, looking up into the skies from our home planet.

So farewell to Arecibo.  There will always be something unique and marvelous about the image of that huge telescopic eye in the Puerto Rican jungle.  As Seth Shostak pointed out, its loss won't stop our yearning for knowledge, but it's hard to imagine finding something as grand and iconic to take its place in our imaginations.