An online acquaintance of mine made an interesting statement a couple of days ago.

"The Europeans didn't just bring exploitation and disease to North America, they brought war.  The Native Americans didn't even fight wars until after the Europeans arrived."

I asked him how he knew this, and he said he'd read it in a book, and then posted a link from (of all things) a Reddit page.   I gave a verbal shrug, and sort of said, "Okay, then," and didn't push the topic any further.  But I've been thinking about it ever since.

Why do we need to have certain ethnic groups be characterized by a nearly mythical goodness?

How often have we heard that before the Europeans arrived, the Natives were "in touch with the land," that they respected the Great Spirit, asked animals' permission before hunting, never took more than their fair share of what nature had to offer?  And now, this gentleman claims that they also never made war on each other until the Europeans arrived and taught them to do so.  I've heard similar claims made for other groups -- most commonly the Celts, who have also been mythologized to a fare-thee-well, to the point that since the mid-1800s there have been quasi-religious groups of "druids" who have tried to emulate what they think the Celts were doing back then.  More recently, the Afrocentrist movement has claimed that all good things came from Africa, and the extreme wing of that school of thought calls dark-skinned people "Sun People" and light-skinned people "Ice People" -- with all of the value judgments that those terms imply.

There are a couple of problems with all of this -- one of them academic, one of them common-sense.

The academic problem is that because all three of those groups left next to no tangible records, we really don't have all that clear a picture of what they were doing before they were contacted by societies who did write things down.  And when that contact occurred, the records left weren't exactly unbiased -- it's hard to know how much to believe of (for example) what the Romans wrote about the Celts.  Trying to piece together what was going on in the years prior to such contact is decidedly non-trivial, and has to be inferred from archaeological evidence and such indirect evidence as patterns of linguistic distribution. 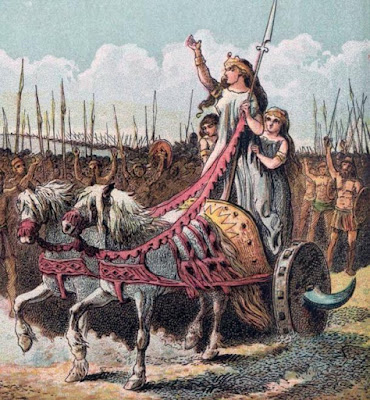 Queen Boudicca of the Celts by Joseph Martin Kronheim (1855) [Image is in the Public Domain]
In preparation for writing this, I tried to find out what was actually known to anthropologists about the nature of society in pre-Columbian North America, and the answer is: surprisingly little.  I'm no anthropologist myself, so am unqualified to make a firm judgment, but what did strike me about the papers I read is that they don't even necessarily agree with each other.  The tangible artifacts left behind by some groups (e.g. the Pueblo cultures of the US Southwest) seem to suggest a peaceful agricultural existence, but that, too, is a guess.  It seems fairly certain that the Haudenosaunee (Iroquois) tribes of the Northeastern US did a good bit of fighting with the Algonquian tribes of Eastern Canada; those groups were "traditional enemies" and apparently were happily beating each other up long before the French and English arrived and made things worse.  Certainly the Aztecs, Maya, and Incas of Central and South America were not exactly what you might call peaceful by nature -- stone carvings show Aztec priests ripping the hearts from living sacrificial victims, and at least some of those victims appear from the carvings to have been prisoners of war.

My second objection is purely common sense; while some cultural values seem to me to be better than others, I just don't believe that whole groups of people were somehow "nicer" overall.  Consider what a future anthropologist might make of our current "warlike" American culture -- in the last hundred years we have certainly fought a great many times in places around the globe, for a variety of purposes, and during that time have diverted a large percentage of our resources into weaponry and the military.  What does that mean about us as a people?  My general feeling is "not much."  If you look around you, you'll find mean people, nice people, aggressive people, gentle people, and pretty much the gamut of whatever set of traits you choose.  Sure, our militarism is connected to our citizenry -- the military decisions are made by our leaders, who are elected by us -- but a future mythologizer who came up with a concept of American People As Evil Bloodthirsty Imperialists would be missing the truth by a mile.  (As would a concept of Americans As Courageous, World-Saving Warriors.)

Please note that I am in no way trying to excuse what our, or any other culture's, militarism actually accomplished.  What the Europeans did to the Native Americans and the Africans, what the British did to the Australian Natives and the people of India and Pakistan, what the Romans (and later the English) did to the Celts, are inexcusable tragedies.  My point is that the cultures who were the victims of these atrocities were not themselves perfect, and we do no favors either to them nor to the study of history in general by pretending that's true.
It is easy, out of our pity for the losers, to make them into creatures of myth, as having lived in an Eden until the nasty aggressors came in and fucked it up.  As always, reality is complex and messy, and doesn't fit neatly into pigeonholes.  It might be appealing to believe that the Celts were the Mystical, Nature-Worshiping People of the Sacred Forest prior to their being beaten to a pulp by a whole succession of cultures.  But this is a myth, just like the Native American as Noble Protector of the Environment and the African cultures as warm-hearted, creative Sun People.  No culture is perfect, no ethnic group without flaws, and it is only our desire to have an ideal to espouse that makes us ascribe such characteristics to the inhabitants of the past.
********************************
One of the most compellingly weird objects in the universe is the black hole -- a stellar remnant so dense that it warps space into a closed surface.  Once the edge of that sphere -- the event horizon -- is passed, there's no getting out.  Even light can't escape, which is where they get their name.
Black holes have been a staple of science fiction for years, not only for their potential to destroy whatever comes near them, but because their effects on space-time result in a relativistic slowdown of time (depicted brilliantly in the movie Interstellar).  In this week's Skeptophilia book-of-the-week, The Black Hole Survival Guide, astrophysicist Janna Levin describes for us what it would be like to have a close encounter with one of these things -- using the latest knowledge from science to explain in layperson's terms the experience of an unfortunate astronaut who strayed too close.
It's a fascinating, and often mind-blowing, topic, handled deftly by Levin, where the science itself is so strange that it seems as if it must be fiction.  But no, these things are real, and common; there's a huge one at the center of our own galaxy, and an unknown number of them elsewhere in the Milky Way.  Levin's book will give you a good picture of one of the scariest naturally-occurring objects -- all from the safety of your own home.
[Note: if you purchase this book using the image/link below, part of the proceeds goes to support Skeptophilia!]