Sawney Bean and the veracity of folklore

One of the creepiest legends to come out of old Scotland is the tale of Sawney Bean (or Beane), whose cave-dwelling, cannibalistic family allegedly ran amok in South Ayrshire in the 16th century.  Bean, born Alexander Bean in East Lothian, was said to be the son of a manual laborer, but had a vicious streak from childhood that was exacerbated when in his late teens he married a woman who was worse.

The couple set up housekeeping in a deep cave in Bennane Head, a promontory between Ballantrae and Girvan on the west coast of Scotland.  There, he and his evil wife were the progenitors of quite a brood; eight sons, six daughters, and thirty-two grandchildren (many of them born to incestuous unions).  The Beans survived in their remote abode by waylaying travelers... 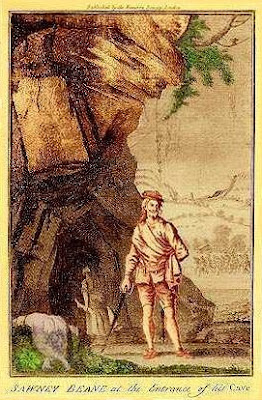 "Sawney Beane at the Entrance of his Cave."  Note the woman in the background -- holding a severed human leg.  [Image is in the Public Domain]
Local villagers knew about the disappearances, and sometimes they'd find bones and other body parts -- but in an apparent case of "How dumb exactly are you people?" it never occurred to them that the culprits were a crew of depraved cannibals living nearby.   The local law enforcement cast a suspicious eye on local innkeepers and pub owners, since they were often the last people to see the victims alive.  But eventually one lucky guy fought back against the Beans when attacked, survived (his wife, apparently, wasn't so lucky) and brought back a tale of being swarmed by men and women intent on murdering him.  King James VI of Scotland (later James I of England) launched an attack on the family, sending soldiers in to destroy them and their stronghold.

The Beans were defeated, and those not killed in the skirmish were brought back to Edinburgh in chains.  The men were executed by having their hands, feet, and genitals chopped off, and allowed to bleed to death; the women were burned at the stake.  One daughter, "Black" Agnes Bean, who had escaped before the attack and attempted to settle down in Girvan under an assumed name, was eventually found out and hanged.

So that was the end of the Beans.  But the question that I'd like to ask is: is any of it true?  How would we know if it was?

One reason we might cast a skew glance at the tale is how varied the different versions of it are.  Sean Thomas wrote a piece on the Bean clan in Fortean Times, a bit of which was excerpted at the site The Spooky Isles (the original article, unfortunately, seems no longer to be available):

... from broadsheet to broadsheet, the precise dating of Sawney Bean's reign of anthropophagic terror varies wildly: sometimes the atrocities occurred during the reign of James VI [ca. early 1600s], whilst other versions claim the Beans lived centuries before.  Viewed in this light, it is arguable that the Bean story may have a basis of truth but the precise dating of events has become obscured over the years.  Perhaps the dating of the murders was brought forward by the editors and writer of the broadsheets, so as to make the story appear more relevant to the readership...  To add to the intrigue, we do know that cannibalism was not unknown in mediaeval Scotland and that Galloway was in mediaeval times a very lawless place; perhaps nothing on the scale of the Bean legend took place, but every story grows and is embroidered over time.

While the main part of the story itself doesn't involve the supernatural -- something that would lead me to doubt the whole thing -- there's a paranormal twist to the execution of Agnes Bean in Girvan:

Historically, Girvan was significant as the home of the Hairy Tree.  According to legend, the Hairy Tree was planted by Sawney Bean’s eldest daughter in the town’s Dalrymple Street.  However, when her family was arrested, the daughter was implicated in their incestuous and cannibalistic activities and was hanged by locals from the bough of the tree she herself planted.  According to local legend, one can hear the sound of a swinging corpse while standing beneath its boughs.

When you add to this the fact that there is an ongoing dispute amongst the people in Girvan regarding which tree in the town is the authentic "Hairy Tree," it does tend to make you wonder how much of the rest of it can be true.

Another suspicious factor is the similarity of the Bean story to an earlier tale from Scotland, that of "Christie Cleek."  Christie Cleek, born Andrew Christie in Perth in the mid 14th century, was driven to murder and cannibalism during the horrible famine that followed the ravages of the Black Death in the British Isles in the 1350s.  "Cleek" means "shepherd's crook" -- the tool Christie used to pull down travelers and pluck riders from their horses.  Like the Beans, Christie Cleek and his family lived in hiding, feasting on human flesh and striking fear into the hearts of the locals.  It has a different ending, though -- after the famine eased, an armed force was sent in to rid the countryside of the menace.  Everyone in the family was killed but Christie himself -- he escaped, and lived to a ripe old age under an assumed name.  The name "Christie Cleek" became a synonym in that part of Scotland for the bogeyman, useful for scaring children to the pants-wetting stage during late-night storytelling sessions around the fire.

So the inconsistencies and variations in the Bean story, plus the analogies to earlier tales, makes you wonder.  The most likely answer is that Bean himself (and possibly his savage wife) were real, but that a lot of the excesses attributed to them and their progeny were exaggerations.  About the veracity of the details, there is simply not enough hard documentation to be certain.

It's a gruesome and fascinating story.  Certainly a good one for a shiver up the spine.  It'd be nice to know if it was true, but as with most things in the distant past, it's probably not possible.  So like a lot of folklore, we have to let it be -- filed under the heading of "Who knows?"
******************************************
This week's Skeptophilia book recommendation is apt given our recent focus on all things astronomical: Edward Brooke-Hitching's amazing The Sky Atlas.
This lovely book describes our history of trying to map out the heavens, from the earliest Chinese, Babylonian, and Native American drawings of planetary positions, constellations, and eclipses, to the modern mapping techniques that pinpoint the location of stars far too faint to see with the naked eye -- and objects that can't be seen directly at all, such as intergalactic dust clouds and black holes.  I've always loved maps, and this book combines that with my passion for astronomy into one brilliant volume.
It's also full of gorgeous illustrations showing not only the maps themselves but the astronomers who made them.  If you love looking up at the sky, or love maps, or both -- this one should be on your list for sure.
[Note: if you purchase this book using the image/link below, part of the proceeds goes to support Skeptophilia!]