One of the beliefs of our ancestors that has taken the hardest hit from science is that the heavens are static.

The (apparent) movement of the stars and planets against the backdrop of the night sky seemed so orderly that early astronomers like Ptolemy thought they moved in circles -- the perfect symmetry of the circle seemed appropriate for the divine reaches of the heavens.  It's one of the reasons that comets and supernovas upset everyone so much.  They were unpredictable, coming and going with no warning and no apparent cause, so they had to be portents of evil.

Then along came Tycho Brahe and Kepler and Newton, and science demonstrated that even if the movement of the planets wasn't in perfect circles, they did obey fixed mathematical rules that allowed the religious to breathe a sigh of relief (once they stopped putting scientists under house arrest or burning them at the stake).  Orderliness returned, even if it wasn't the order Ptolemy envisioned.  As Galileo put it, "Mathematics is the language in which God wrote the universe."

But even that didn't hold.  Edmond Halley (of Halley's Comet fame) discovered that the stars' positions were changing, that the "eternal heavens" weren't so eternal after all.  Einstein and Schrödinger showed us that Newton's vision of the cosmic rule book was wrong, or at least incomplete.  Heisenberg demonstrated that on some level, reality is fuzzy, that there's an inherent uncertainty that isn't an analytical flaw or poor experimental technique, it's built into the system.  If we gain precision in one measurement, we lose precision in another, and there's no way to get rid of the blur because the fundamental stuff of the universe is itself blurry.

Spooky action at a distance.  Quantum entanglement.  Bell's inequality.  Dark matter.  Dark energy.  All topics I've dealt with here before, and all of which emphasize that however far we've come in our understanding of the universe, we still have a deeply incomplete picture of things.

And still the stars turn in their courses, leading us to see permanence where there is none.

All of this disquieting stuff comes up because of a paper that appeared two weeks ago in Nature Astronomy called, "Detection of the Milky Way Reflex Motion Due to the Large Magellanic Cloud Infall."  In it, astrophysicists Michael S. Petersen and Jorge Peñarrubia of the University of Edinburgh have demonstrated that the Milky Way galaxy itself, which we picture as serenely turning in space like some kind of slow, tranquil whirlpool, is actually being torn apart.

The culprit is the Large Magellanic Cloud, an elliptical "satellite" galaxy named for Ferdinand Magellan, the Portuguese explorer who was the first white European to describe it.  The reason something so (relatively) small can have such a large effect is not only its proximity, but its dark matter content, which seems to be disproportionally high.  The authors write:

Did you catch that bit about "dislodging the Milky Way disk from the Galactic centre of mass?"

That's scientific-ese for "ripping it to shreds." 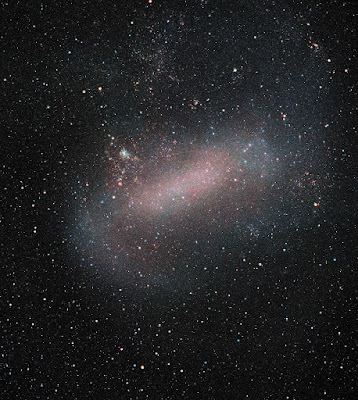 So if anyone thought the Milky Way was a more-or-less permanent structure, this study killed that idea.  "This discovery definitely breaks the spell that our galaxy is in some sort of equilibrium state," said co-author Jorge Peñarrubia, in a press release from the University of Edinburgh.  "Actually, the recent infall of the LMC is causing violent perturbations onto the Milky Way.  Understanding these may give us an unparalleled view on the distribution of dark matter in both galaxies."

As with many studies, this one brings up more questions than it answers.  Why is the LMC moving at such an "astonishing" rate?  (As cautious as most scientists are in their word choice, the fact that they called its speed "astonishing" in a major scientific journal is eye-opening indeed.)  Why does it have enough dark matter to perturb the motions of a galaxy ten times larger, both in mass and in diameter, from a distance of 160,000 light years away?  What ultimate effect will the LMC's swift passage have on the shape of our own galaxy?

For me, it just reinforces something that has come up in Skeptophilia many times; we are very, very, very small in an absolutely enormous universe.  It's both awe-inspiring and a little frightening.  A good thing, probably, that we humans can't stay focused for long on our cosmic insignificance; our day-to-day needs and demands take over pretty quickly, and after all, even the astrophysicists have to fix lunch and renew their drivers' licenses and sleep at night.

But pondering this kind of thing even for a little while is kind of overwhelming, isn't it?  I like to take a quick look, but I don't think our brains are built to stare into the void for any extended period of time.  So if you're looking for me, I'll be huddled under my blankie for the rest of the day.

*************************************
I've always had a fascination with how our brains work, part of which comes from the fact that we've only begun to understand it.  My dear friend and mentor, Dr. Rita Calvo, professor emeritus of human genetics at Cornell University, put it this way.  "If I were going into biology now, I'd study neuroscience.  We're at the point in neuroscience now that we were in genetics in 1900 -- we know it works, we can see some of how it works, but we know very little in detail and almost nothing about the underlying mechanisms involved.  The twentieth century was the century of the gene; the twenty-first will be the century of the brain."
We've made some progress in recent years toward comprehending the inner workings of the organ that allows us to comprehend anything at all.  And if, like me, you are captivated by the idea, you have to read this week's Skeptophilia book recommendation: neuroscientist Lisa Feldman Barrett's brilliant Seven and a Half Lessons About the Brain.
In laypersons' terms, Barrett explains what we currently know about how we think, feel, remember, learn, and experience the world.  It's a wonderful, surprising, and sometimes funny exploration of our own inner workings, and is sure to interest anyone who would like to know more about the mysterious, wonderful blob between our ears.
[Note: if you purchase this book using the image/link below, part of the proceeds goes to support Skeptophilia!]