Rosalind Franklin has become justly famous for her role in discovering the three-dimensional structure of the DNA double helix.  Her specialty was x-ray crystallography, which involves bombarding a crystal with x-rays and photographing the scatter-pattern produced as the x-rays rebound off the atoms in the crystal.  From that photograph, a trained eye can make a good guess as to the arrangement of the atoms in the crystal.

The analogy I always used in my biology classes was a thought experiment: Imagine that you and a couple dozen friends are in a large darkened room, empty except for an object in the middle whose size and shape you can't see.  You and your friends are lined up around the perimeter, and have to stay with your backs against the wall.  You're asked to determine the shape of the object by hurling tennis balls in various directions; if the tennis ball misses the object, your friend on the opposite side of the room gets hit; if the ball hits the object, it ricochets off and lands near another of your friends somewhere else in the room.

Given enough tennis balls and enough time, and recording the results of each throw, you could probably make a decent guess about the size and the shape of the invisible object.  That, essentially, is what x-ray crystallographers do.

Easy concept, difficult in practice.  Franklin was exceptionally good at it, and produced the famous photo that proved the double-helical structure of DNA, accomplishing what dozens of other researchers had failed to do. 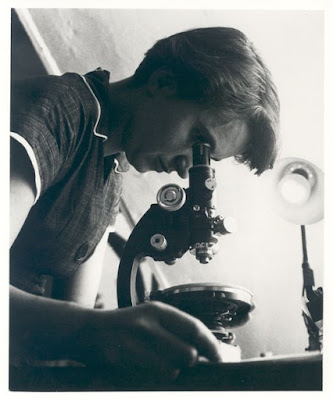 The trouble began when the paper was written that described the conclusions drawn from the photograph -- and the paper's lead author, Maurice Wilkins, didn't include Franklin's name on the list of authors.  Franklin herself died of ovarian cancer in 1958, not long after the paper's release, and so was unable to defend herself; but the reasons for the omission become crystal-clear when you hear comments from James Watson (of Watson & Crick fame) about Franklin's role in the lab.

"There was never lipstick to contrast with her straight black hair, while at the age of thirty-one her dresses showed all the imagination of English blue-stocking adolescents," Watson wrote.  "Her belligerent moods interfered with Wilkins’s ability to maintain a dominant position that would allow him to think unhindered about DNA...  Clearly Rosy had to go or be put in her place… The thought could not be avoided that the best home for a feminist was in another person's lab."
The marginalization, or outright disparagement, of women in academia was ubiquitous back then.  Most of us are rightly outraged when we read about how Franklin and her accomplishments were dismissed.  And we often congratulate ourselves on how far we've come, and name examples of women, minorities, and LGBTQ people who have risen to the top of their fields.
The problem is, this is not so far off from the "there is no such thing as racism... look, I have a black friend!" nonsense you sometimes hear.  As evidence of this, consider the nauseatingly condescending article that appeared only a couple of days ago in the Wall Street Journal.  Written by Joseph Epstein, this article illustrates with disgusting clarity that we've not come far from Watson's "the best home for a feminist was in another person's lab" attitude:

Madame First Lady—Mrs. Biden—Jill—kiddo: a bit of advice on what may seem like a small but I think is a not unimportant matter.  Any chance you might drop the “Dr.” before your name?  “Dr. Jill Biden ” sounds and feels fraudulent, not to say a touch comic...  As for your Ed.D., Madame First Lady, hard-earned though it may have been, please consider stowing it, at least in public.

Excuse me?  "Fraudulent?"  "Comic?"  "Kiddo?"  Can you imagine condescension like this being aimed at a white cis/het man?  A Ph.D. or Ed.D. does confer the right to use the honorific "Doctor" before your name, Mr. Epstein, whether you like it or not.  Not only that, it is a completely deserved acknowledgement of the intellect and diligence of the person who earned it.  I "only" have a master's degree, and I worked my ass off to achieve that.  I know a number of people with doctorates in various fields (a good many of them non-medical), and from their experiences I know how many years of hard work it takes to do the original research required for a doctoral degree.

It is horrifying that this article was written, and unconscionable that the Wall Street Journal elected to publish it.

The smug, smirking tone of this op-ed piece is emblematic; here, over fifty years after Rosalind Franklin conducted her groundbreaking research and was robbed of public acknowledgement of her role, we are still not past the way the patronizing, self-congratulatory patriarchy uses its position of power to minimize (or ignore entirely) the accomplishments of anyone who isn't a white cis/het male.

It may come as no shock that Joseph Epstein has been pulling this bullshit for years.  For fifty years, in fact.  The privilege of white cis/het males in this society extends to overlooking outright sexism and bigotry for decades.  Not just overlooking, but giving it tacit acceptance by the fact that it appears in a major publication.  Take a look at the paragraph he wrote in a piece call "Homo/Hetero: The Struggle for Sexual Identity" in The Atlantic in 1970:

They are different front the rest of us.  Homosexuals are different, moreover, in a way that cuts deeper than other kinds of human differences—religious, class, racial—in a way that is, somehow, more fundamental.  Cursed without clear cause, afflicted without apparent cure, they are an affront to our rationality, living evidence of our despair of ever finding a sensible, an explainable, design to the world.  One can tolerate homosexuality, a small enough price to be asked to pay for someone else's pain, but accepting it, really accepting it, is another thing altogether.  I find I can accept it least of all when I look at my children.  There is much my four sons can do in their lives that might cause me anguish, that might outrage me, that might make me ashamed of them and of myself as their father.  But nothing they could ever do would make me sadder than if any of them were to become homosexual.  For then I should know them condemned to a state of permanent niggerdom among men, their lives, whatever adjustment they might make to their condition, to be lived out as part of the pain of the earth.

It's tempting to say, "Well, that was 1970."  Which might be an excuse if Epstein had ever apologized or retracted what he'd written.  The best he could do was a mealy-mouthed reference to his 1970 article in the Washington Examiner in 2015, in which he said, "I am pleased the tolerance for homosexuality has widened in America and elsewhere, that in some respects my own aesthetic sensibility favors much homosexual artistic production...  My only hope now is that, on my gravestone, the words Noted Homophobe aren’t carved."

So it's probably too much to expect Epstein to back down with respect to his smug dismissal of Dr. Jill Biden's degree.  The Wall Street Journal, on the other hand, should issue a retraction and an unqualified apology.  This has nothing to do with her being the wife of the president-elect.  It would still be the case if she was an ordinary citizen in any part of academia.  The "glass ceiling" isn't gone; we're just very good at pretending it is, at acting like today we've shucked all the old problems of discrimination and bigotry.  But that a major newspaper is publishing -- even on its "Opinion" page -- something this blatantly demeaning, condescending, and rude is somewhere beyond appalling.

We need more women and minorities to be belligerent (to use James Watson's word) -- to refuse to accept the disparagement of their accomplishments, to give a pair of middle fingers to the entrenched establishment Epstein represents, that feels threatened whenever anyone from outside attempts an ingress.  How much talent, passion, and intelligence has been thwarted because of this attitude?  We can not tolerate this any more.  It has to be shouted down every single time it rears its ugly head.

If we really have progressed beyond the bigotry of the mid-twentieth century, if we really have gotten to a place where this generation's Rosalind Franklins would be welcomed and appreciated, we need to call out the Joseph Epsteins of the world, loud and clear.