The signature of the creator

The Star Trek: The Next Generation episode "The Chase" is justly revered by Trekkies, and also by people who simply like a good story.  The gist -- giving as little in the way of spoilers as I can manage, if you've not seen it -- is that there's a message implanted in our DNA and the DNA of alien species across the galaxy.  No one species has the entire thing, so to find out what it means requires getting tissue samples from all over the place, extracting the piece of the message, then somehow putting the entire thing together to decipher what it says.

A secret code dispersed through time and space, so to speak.

While the quasi-scientific explanation behind the whole thing was a little dubious for those of us who know something about genetics and evolution, it was a hell of a good idea for a story.  A mysterious, super-powerful someone left its thumbprint on life everywhere in the universe, and there the message has sat, waiting for us to become smart enough and technologically advanced enough to find it. 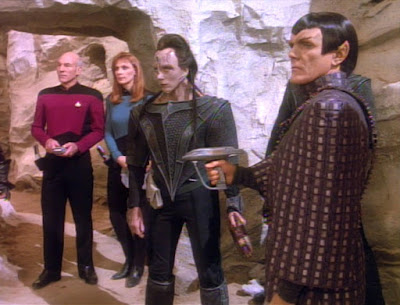 "The Chase" brings up a theological question I've debated before with religious-minded friends; how, starting from outside of the framework of belief, you could tell there was a God by what you see around you.  I often hear "natural beauty" and "love and selflessness" brought up, but (unfortunately) there seems to be enough ugliness, hatred, and selfishness to more than compensate for the good stuff.  Put simply, how would a universe with a divine presence look different from one without?  I've never been able to come up with a good answer to that.  To me, the God/no God versions of the universe look pretty much alike.

Which is a large part of why I'm an atheist.  I'm perfectly okay with revising that if evidence comes my way, but at the moment, I'm not seeing any particular cause for belief in any of the various deities humans have worshipped along the way.

What brings all this up is a paper released last week in arXiv called, "Searching for a Message in the Angular Power Spectrum of the Cosmic Microwave Background."  The CMB is a relatively uniformly-spread (or isotropic, as the scientists put it) radiation that is the remnant of the Big Bang.  In the 13.8-odd billion years since the universe started, the searing radiation of creation has become stretched along with the space that carries it until it has an average wavelength of two millimeters, putting it in the microwave region of the spectrum, and that radiation comes at us from everywhere in the sky.

What the author, Michael Hippke of the Sonnenberg Observatory in Germany, proposed was something that is reminiscent of the central idea of "The Chase."  If there was a creator -- be it a god, or a super-intelligent alien race, or whatever -- the obvious place to put a message is in the CMB.  The minor fluctuations ("anisotropies") in the CMB would be detectable by a technological society pretty much from any vantage point in the visible universe, and so hiding a pattern in the apparent chaos would be as much as having a signature from the creator.

So Hippke digitized the most detailed map we have of the CMB, and then estimated what part of the signal would have been lost or degraded in 13.8 billion years due to quantum noise and interference with the much closer and more powerful radiation sources in our own galaxy.  After some intense statistical analysis, Hippke determined that there should be at least a one-thousand-bit remnant of sense somewhere in there, so he set about to find it.

"I find no meaningful message in the actual bit-stream," Hippke wrote.  "We may conclude that there is no obvious message on the CMB sky.  Yet it remains unclear whether there is (was) a Creator, whether we live in a simulation, or whether the message is printed correctly in the previous section, but we fail to understand it."
Despite how I started this post, I have to admit to being a little disappointed.  It was a clever approach, and no one would be more excited than me if he'd actually found something.  I don't honestly like the idea that we live in a chaotic, meaningless universe -- or, more accurately (and optimistically) that the only meaning is the one we create within it.  But if there's one thing I've learned in my sixty years on Earth, it's that reality is under no particular obligation to order itself in such a way that it makes me comfortable.
But still, if there had been a message there, how cool would that be?  Even if, as the Cardassian commander Gul Ocett said in "The Chase," "it might just be a recipe for biscuits."
*************************************
I've always had a fascination with how our brains work, part of which comes from the fact that we've only begun to understand it.  My dear friend and mentor, Dr. Rita Calvo, professor emeritus of human genetics at Cornell University, put it this way.  "If I were going into biology now, I'd study neuroscience.  We're at the point in neuroscience now that we were in genetics in 1900 -- we know it works, we can see some of how it works, but we know very little in detail and almost nothing about the underlying mechanisms involved.  The twentieth century was the century of the gene; the twenty-first will be the century of the brain."
We've made some progress in recent years toward comprehending the inner workings of the organ that allows us to comprehend anything at all.  And if, like me, you are captivated by the idea, you have to read this week's Skeptophilia book recommendation: neuroscientist Lisa Feldman Barrett's brilliant Seven and a Half Lessons About the Brain.
In laypersons' terms, Barrett explains what we currently know about how we think, feel, remember, learn, and experience the world.  It's a wonderful, surprising, and sometimes funny exploration of our own inner workings, and is sure to interest anyone who would like to know more about the mysterious, wonderful blob between our ears.
[Note: if you purchase this book using the image/link below, part of the proceeds goes to support Skeptophilia!]