The Wall Street Journal strikes back

On Monday I wrote in response to Joseph Epstein's commentary about Dr. Jill Biden's Ed.D., in which he called it "comical" and "fraudulent."  The snarky, smirking, dismissive editorial was little more than a message that women who get uppity need to be put in their place and not rise above their station.  I ended by recommending that the Wall Street Journal issue a retraction and an apology, that such a sexist, patronizing screed was far beneath what should be acceptable in a major publication, even in the "Opinion" section.

I wasn't the only one.  Criticism was leveled at the WSJ and Epstein from a variety of sources.  Most of them included some kind of appeal that the WSJ repudiate the stance Epstein took, and hoped that its leaders would recognize the ugly message it was sending.

We should have known better.

Yesterday Paul Gigot, the chief editor of the WSJ's editorial page, wrote a rebuttal to the people who had criticized Epstein and the WSJ's choice to publish his piece, and predictably doubled down on his being justified in doing so.  In the process, he comes off sounding nearly as smug and chauvinistic as Epstein himself.  A particularly blatant example:

Why go to such lengths to highlight a single op-ed on a relatively minor issue?  My guess is that the Biden team concluded it was a chance to use the big gun of identity politics to send a message to critics as it prepares to take power.  There’s nothing like playing the race or gender card to stifle criticism.  It’s the left’s version of Donald Trump’s “enemy of the people” tweets.

There's a lot to unpack in this short paragraph.

First, the dismissal of women and minorities in academia is hardly a "minor issue."  Easy, perhaps, for it to seem minor to rich white men like Gigot and Epstein; but if you want a different perspective, all you'd have to do is talk to one of the many women and/or minorities who have had to fight with everything they have in order to achieve and maintain their positions.  Even once they've succeeded, women (not only in academia but in the corporate world) face sexism and outright sexual harassment, the majority of which goes unreported.

Like I said: ask a woman who's risen to the top of her field.  I'd bet cold hard cash she'd corroborate what I'm saying. 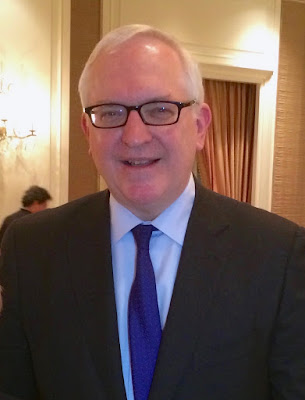 Second, it's really convenient that Gigot ascribes the criticism to "the Biden team," as if the only way anyone could object to what Epstein said was if (s)he was some kind of Biden operative.  (If that's the case, I should put it out there that I still haven't received my Shill Check™ from the team.)  It might be hard for you to imagine, Mr. Gigot, but people sometimes have well-considered opinions that have nothing to do with political posturing.

Then there's the whole "cancel culture" and "race or gender card" thing.  Those phrases (and also "politically correct") have become dogwhistles that at their heart mean "I should be able to say any damn thing I want, however demeaning or offensive, and be immune to criticism for it."  It's a perversion of the First Amendment; "free speech" doesn't mean "freedom from any consequences for what I say."  If you say something bigoted, you don't nullify any criticism you receive by dismissing it as "cancel culture."

Then there's his equating the criticism of Epstein's article with Donald Trump's "enemy of the people" tweets.  If Mr. Gigot sees an equivalence between people objecting to one editorial in one journal as demeaning and offensive, and Trump's calling media and journalists as a whole "the enemy of the people," it's probably pointless to try to explain it to him, so I'll leave it at pointing out that Trump's wholesale condemnation of any media pointing any criticism in his direction led to indiscriminate violence and threats against journalists.  Honestly, Trump's "enemy of the people" tweets are in spirit far less like the people who criticized Epstein than they are like Gigot's defense of him.

At the end of his rebuttal, Gigot wrote something that made me laugh out loud, and simultaneously wonder how anyone could take him seriously:

Many readers said Mr. Epstein’s use of "kiddo" is demeaning, but then Joe Biden is also fond of that locution.  In his 2012 Democratic convention speech he even used it to refer to his wife in the context of his many proposals of marriage: "I don’t know what I would have done, kiddo, had you on that fifth time said no."

So he honestly sees no difference between how a man refers to his spouse and how others refer to her?  My wife calls me "sweetie" and "honey," but I'd rightly be a little perturbed (not to mention puzzled) if someone wrote a newspaper article about me and used those terms.  As I pointed out on Monday, we have here a turn of phrase that no one would dream of directing at a cis/het white male, and yet is supposed to be A-OK when a cis/het white male directs it toward a woman.  Once again, I'd ask you to talk to any women you know who are in academia or the corporate world, and ask them if they've been talked down to in this fashion -- and how it makes dismissal of their opinions and accomplishments seem somehow acceptable.

Like I said, it was probably a forlorn hope that Gigot (or anyone else at the WSJ) would back down on their decision to publish Epstein's article.  I thought maybe, just maybe, someone in charge would recognize that it's time we call out such condescending and patronizing attitudes as deserving of relegation to the dustbin along with racism and homophobia and any of the other ways that cis/het white males have maintained the power differential in their favor.

All Gigot proved in his rebuttal is that we've still got a very long way to go.