When the volcano blows

If you were wondering what the final act of the 2020 fever-dream theater might be, I have a possible contender.
Geologists have just discovered another supervolcano besides Yellowstone.
Supervolcanoes -- known in scientific circles as caldera eruptions -- are insanely powerful.  The famous 1883 eruption of Krakatoa, in Indonesia, was a caldera eruption, but even that was on the small end of things; it blasted 25 cubic kilometers of ash and rock fragments into the air, while the last major eruption of Yellowstone (650,000 years ago) released forty times that much, and covered most of what is now the central United States in a meter or two of ash.
And Toba, another Indonesian volcano, released almost three times more than that, 74,000 years ago -- and some anthropologists think the resulting climate impact nearly wiped out the up-and-coming human race, by some estimates reducing the entire population of humans to only about a thousand individuals.
By comparison, the eruption of Mount Saint Helens in 1980 was pretty much a wet firecracker.
So anyhow, why this all comes up is because we thought we knew where most of the potentially huge calderas were located, and geologists have given a great effort to calming everyone down, saying we have a handle on things and will have plenty of warning if any of them show signs of an imminent eruption.
Turns out, we didn't even know one of them was there.
A cluster of six islands in the Aleutian chain -- Carlisle, Cleveland, Herbert, Kagamil, Chagulak, and Uliaga -- have long been known to be stratovolcanoes, conical, explosive volcanoes of the same type as Mount Vesuvius.  What scientists didn't know until now is that apparently, the magma reservoirs of these six islands are not separate blobs, but one enormous blob underlying the entire island chain.
Just like the one under Yellowstone. 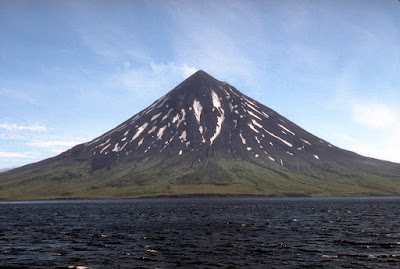 Mount Cleveland [Image is in the Public Domain]
The findings, which will be formally presented at the meeting of the American Geophysical Union on Monday, are a little alarming.  According to the press release from Science Daily:

Researchers from a variety of institutions and disciplines have been studying Mount Cleveland, the most active volcano of the group, trying to understand the nature of the Islands of the Four Mountains.  They have gathered multiple pieces of evidence showing that the islands could belong to one interconnected caldera.

Unlike stratovolcanoes, which tend to tap small- to modestly-sized reservoirs of magma, a caldera is created by tapping a huge reservoir in the Earth's crust.  When the reservoir's pressure exceeds the strength of the crust, gigantic amounts of lava and ash are released in a catastrophic episode of eruption...

If the researchers' suspicions are correct, the newfound volcanic caldera would belong to the same category of volcanoes as the Yellowstone Caldera and other volcanoes that have had super-eruptions with severe global consequences.

So yeah.  That's just marvelous.  Okay, I know, the discovery doesn't mean it's going to erupt any time soon, although it bears mention that Mount Cleveland has erupted 22 times in the past 230 years, and eight of those eruptions were in the last eleven years.  So it would totally be on-brand for 2020 if the whole thing went kablooie.

Yes, I know, I'm not supposed to be superstitious or engage in magical thinking or anything.  Given how this year's gone, I think I deserve a little slack, here.  No one will be happier than me if January 1, 2021 comes and the Aleutian Islands still exist, but at present I'm not ruling anything out.

There we have it -- a supervolcano that we didn't even realize existed.  Just another thing to put in your Box of Anxiety.  Honestly, at the moment I'm more concerned about what Donald "Cheeto Benito" Trump and his cronies could potentially do to the United States on the way out the door.  In my experience, assholes can do more damage than ash holes.

Even the super-sized ones.